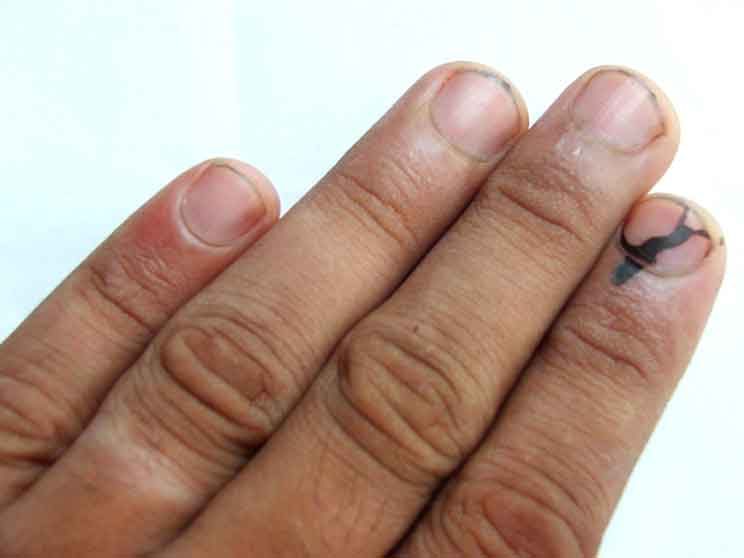 A voter’s finger is marked to indicate that this person has cast a vote. In his article, Lionel Fynn argues that voting in an election is a citizen’s duty.

By Lionel Fynn – When elections draw near, many discussions surround the importance of voting and also challenges regarding the relevance of going to the polls.

Sometimes it can be disheartening when we see injustice, go to the polls to vote for change, then see the same injustice continue over and over again.

At other times we may be disappointed that the manifestos of all political parties do not fully reflect our religious convictions or angered that those parties which do so are an insignificant minority.

Whatever may dissuade us from voting, there are good reasons to vote.

Democracy and subsequent public participation—including voting—are privileges fought for by previous generations of South Africans—and by the early Greeks.

Autocratic states relinquish complete power of governance to one person (the autocrat) who governs the people even though they had no say in the appointment. Usually, autocrats become dictators who serve their own interests instead of those of the people.

Dissatisfied with autocracy, the early Greeks introduced a different form of governance: demos (people) kratain (to rule), or democracy, in which the people governed themselves.

In time, even monarchical societies introduced parliaments which involve the participation of the majority and which regulate the authority of the monarch.

South Africa was one such country adopting democratic rule, but it was not until 1994 that all citizens of South Africa could actually vote.

Before 1994, the majority of South Africans, excluded from democracy, fought for their right to vote, for their right to be equally represented and have a say in the decision-making of the country. In this they were supported by religious leaders who spoke openly against the apartheid regime, and encouraging equal rights for all on the basis of us all being made in the image and likeness of God.

Like the early Greeks, the disenfranchised did not want to be dictated to but have a say in policy development.

When disputes arise, when we face challenges as a nation, we must not be passive recipients of an imposition, but instead be actively involved in a solution process, coming together to discuss ways of overcoming the challenges, expressing the situations affecting us.

The power of voting is in giving every citizen an opportunity to express their point of view, to influence the status quo.

Yes, change happens slowly. Yes, party manifestos may not meet our expectations. Yes, parties that may reflect our religious priorities are a minority. But it is through the vote that we are given the power to change this.

Of course we can all agree that our system needs much improvement. And yet, there are so many freedoms we now take for granted as a result of our vote: an inclusive democracy, a sovereign Constitution and a multiracial society, to name but a few.

May 8 is not just any ordinary day. It is a public holiday set aside for the citizens of South Africa to put their heads together to find solutions to the challenges facing this beautiful country.

With 48 options to choose from, the elections represent an opportunity to bring our country closer to its goal of being a place of happiness.

The onus rests on every one of us to make use of this opportunity which comes along only every five years, rather than to sit back and be part of the problem.

Lionel Fynn
Lionel Fynn is a graduate of St John Vianney Seminary and a masters student at the University of South Africa.