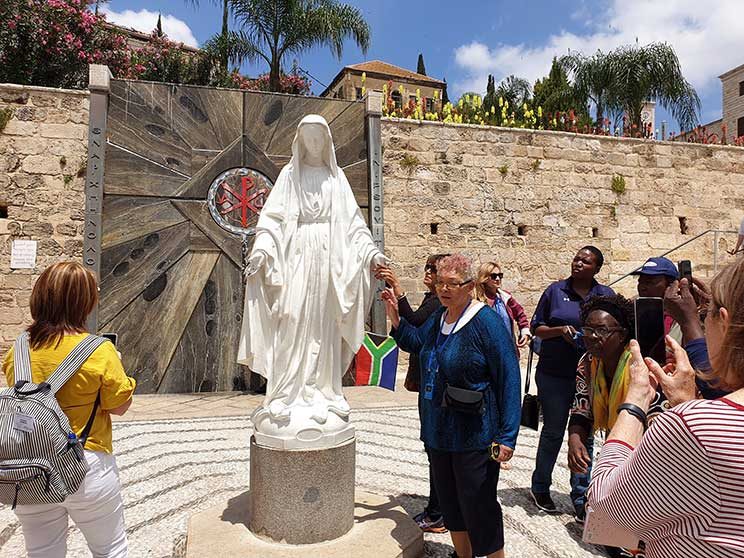 In May Southern Cross pilgrims travelled to the Holy Land and Rome. Günther Simmermacher reviews the highlights of the Holy Land leg of the pilgrimage.

Last week’s article on The Southern Cross’ pilgrimage in May looked at the highlights in Rome. Here are some of the many remarkable things our group of 57 experienced in the Holy Land.

For the first-time pilgrim, all the sights and experiences in the Holy Land can be a little overwhelming. And how could it be different when one travels through the actual places of the lives of Jesus, of Mary, of the disciples and prophets?

In the Holy Land, one experiences a physical connection with the Lord, with the Scriptures which had been familiar only through words and visual art. Here, the Bible becomes real. This is why the Holy Land is sometimes called “The Fifth Gospel”.

The believer can’t but survey in wonder the places where we know for certain Jesus stood or walked, such as the house of St Peter in Capernaum or the flight of steps on Mount Zion next to the church of St Peter in Gallicantu, maybe visualising the scenes that played out there.

We can also be sure that the church of the Holy Sepulchre is the true location of Golgotha and the tomb of the Resurrection. But where places like the Sea of Galilee are pastoral, that church in the heart of Jerusalem’s Old City is crowded and chaotic.

Often groups queue for a long time to get into the tiny chapel of the tomb. Along the way, one may encounter rude people trying to push in, and at the end of the line, there’ll be a rather unpleasant Greek Orthodox monk guarding the tomb like a humourless bouncer standing watch outside an exclusive nightclub.

One can see why over time these men might have lost their tender touch, and I suspect they find it a nuisance that all these people are trampling all over what these monks regard as their property.

But when these monks act like the security police in a totalitarian state, they fail to reflect the love of the very Christ whom they seek to guard.

In short, visiting the church of the Holy Sepulchre when it is full can be a less than pleasant experience. But — and this is the crucial point — one must not let the chaos detract from the indefinable wonder we must feel when we touch the rock on which the Cross stood or pray in the place where our Lord rose from the dead.

It is these brief moments that we must lock in our hearts, to treasure these memories when we come home; and use these then as we prayerfully reflect on the Passion and Resurrection of Our Lord. 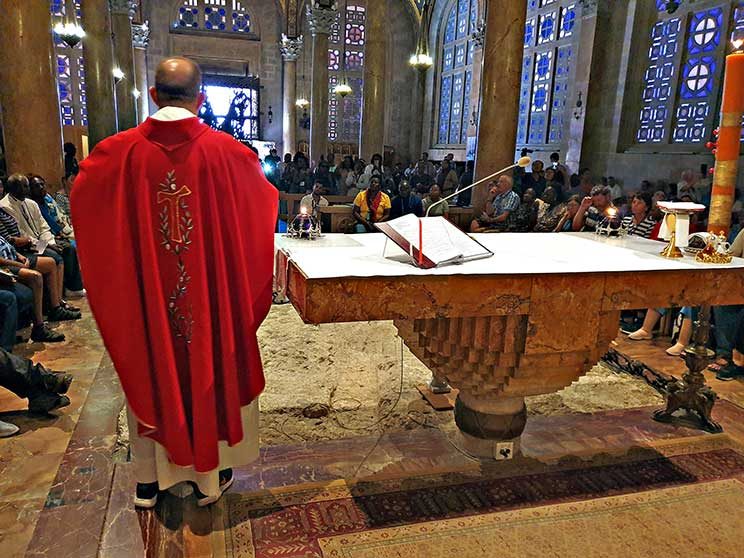 Mass in the impressive church of All Nations in the Garden of Gethsemane, Jerusalem. In front of the altar is the Rock of the Agony.

After Christianity was legalised in the early 4th century, the Holy Land experienced a boom in the construction of churches which lasted for more than a hundred years.

Most of these churches were destroyed in the Samaritan uprisings of the sixth century, the Persian sack of 614 and bouts of Muslim persecution, as well as by earthquakes, neglect, and the passage of time.

Periodically new churches would be built above those from the Byzantine age. Most of these would also prove to fall short on lasting an eternity.

Only one major church has survived intact from the Byzantine era: the church of the Nativity in Bethlehem, which marks the birthplace of Christ.

Built in the 4th century and rebuilt in the 6th, the basilica has of late been undergoing a thorough renovation. The ancient mosaics on the walls now gleam, and the columns, once blackened by grime and soot, now reveal images painted on them many centuries ago.

In Jerusalem, the church of the Holy Sepulchre was first dedicated in 335 AD and stood for nearly 700 years until it was destroyed by a crazed caliph in 1009.

After the conquest of Jerusalem, the Crusaders rebuilt the church, and its architecture is much as it was when the church was dedicated in 1149.

Apart from the church of St Anne, another Crusader structure, most of the Holy Land’s churches are fairly new. But unlike most modern churches, which often are plain and functional rather than inspiring, those in the Holy Land tend to be beautiful and rich in symbolism.

This is mostly the legacy of the great Italian architect Antonio Barluzzi (1884-1960).

A man of deep faith, he built some of the greatest churches in the Holy Land. Our group saw most of them, and had Mass in the Barluzzi churches of All Nations in the Garden of Gethsemane, the Flagellation at the start of the Via Dolorosa, and the Good Shepherd in Jericho.

I regard the Barluzzi churches as poetry in stone. Every architectural decision has a meaning.

At Shepherds’ Field, near Bethlehem, Barluzzi shaped the church like a tent of the type shepherds used in Jesus’ time, with light streaming through the dome to represent the angels who — hark! — announced the birth of the Messiah.

The alabaster windows of the church of All Nations are dark, allowing in only minimal light, to recall the darkness of the night of Jesus’ arrest.

Further up on the Mount of Olives, the church of Dominus Flevit (The Lord Wept) takes the shape of a tear. In its window, a cross is positioned to loom over the Temple Mount, whose destruction Jesus predicted.

And so it goes on. It is rare that architecture prompts us to reflection and prayer. The genius Barluzzi accomplished this. 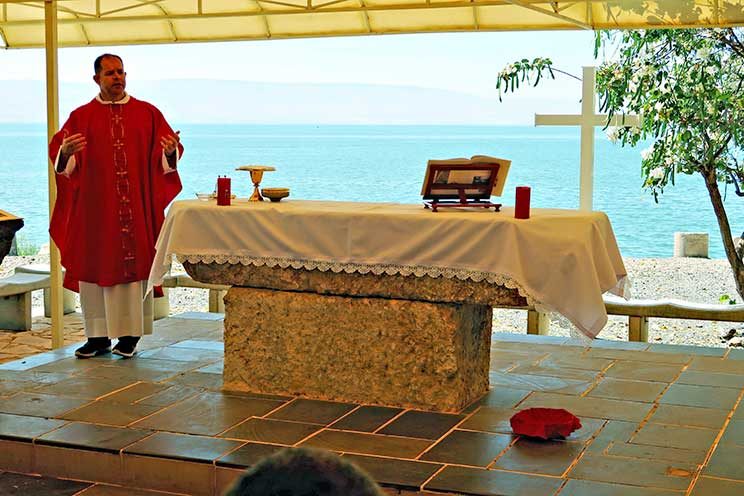 Fr Russell Pollitt SJ preaches during an outdoor Mass in Capernaum at the Sea of Galilee.

There are many memorable highlights on a pilgrimage: sailing on the Sea of Galilee; the renewal of wedding vows in Cana and baptismal promises at the Jordan River (hopefully at the authentic site in the desert, not Yardenit, the commercial theme park near the Sea of Galilee); walking the Via Dolorosa in Jerusalem, and so on.

But always at the centre on pilgrimage is the Mass. And it is special to have Mass in the places where the events we know from Scripture actually took place.

Who among our group will forget the Mass in the church of All Nations, sitting around the Rock of the Agony on which Jesus prayed and sweated blood before his arrest in the Garden of Gethsemane?

This church, more than any other, is where pilgrims can bring in prayer their deepest fears and most burning concerns to God. This is a place where we can draw solace and strength.

Of all the places where we had Mass, I think it is safe to say, every member of our group will remember one that was celebrated outside a church.

There are several outdoor Mass sites around the Sea of Galilee. I have had the joy of Mass in the Dalmanutha site behind the church of the Multiplication at Tabgha, and many times in the amphitheatre at the nearby church of Peter’s Primacy. These are wonderful.

Lately, the Franciscans at Capernaum have set up an outdoor Mass site right on the shore of the lake. I suspect they were prompted by the need to accommodate the increasing numbers of pilgrims who come in the high seasons (there is also a lovely outdoor Mass site on the Mount of Beatitudes). 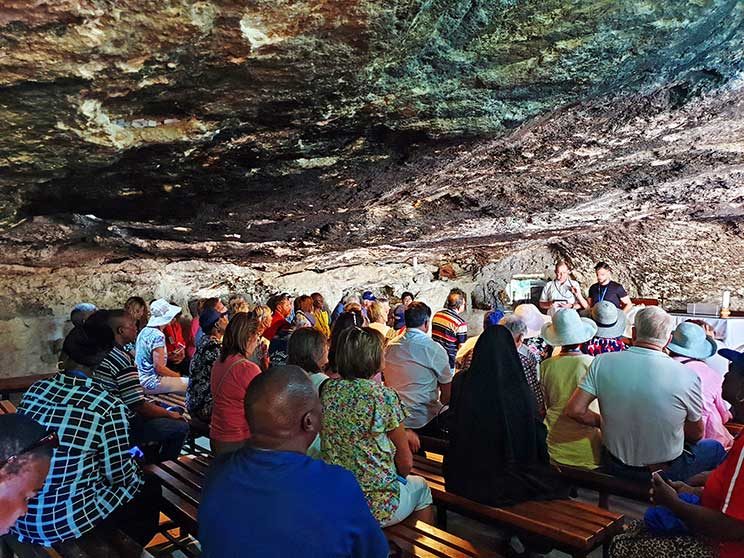 Our Mass at that spot was extraordinarily beautiful. Behind us was the house of St Peter. The waves of the lake lapped gently on the shore. Fr Russell Pollitt SJ, our spiritual director, was bathed in an amber glow created by the canopy that protects the pilgrims from the elements. Our group was in good voice. I think we all experienced the physical presence of Christ among us…

It was one of those Masses which all who were there will never forget. Some were moved to tears by the experience.

Nobody who took part in this pilgrimage will ever forget this journey. Everybody in the group will have been transformed by the experience and the graces it created, in their own ways and maybe even in ways that they cannot quite define.

Like all pilgrims before them, every time they read or hear the Gospel, they will be transported back to the Holy Land — the Fifth Gospel.