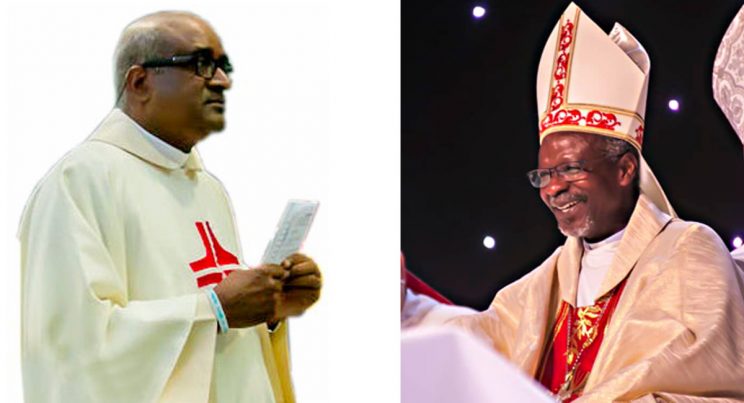 Cape Town was one of Fr Sylvester David’s favourite places to visit for a holiday. Now he will live there as the new auxiliary bishop of the archdiocese.

“I’m getting used to this idea,” he told The Southern Cross. “Bear in mind I’m an Oblate missionary, and we normally get sent to different places and would stay in an Oblate community, so this is going to be a bit different, my community life will be rearranged.”

But, “I’m a man under obedience; I go wherever the Church sends me,” said Fr David on his appointment by Pope Francis.

Previously vicar-general of Durban archdiocese until last year, he has been assigned the titular see of Gunugo.

Fr David was president-elect of the Oblate School of Theology in San Antonio, Texas, and was due to take up the position of president on August 1 to succeed spiritual writer Fr Ron Rolheiser OMI.

The bishop-elect said he would be meeting with Archbishop Gustavo García-Siller of San Antonio for discussions before packing his things.

“I need to give the archbishop the courtesy of saying goodbye, as he welcomed me very warmly on arrival, and got me to introduce myself to the local clergy,” he said.

Fr David received many messages and wellwishers around the world.

“I used to do parish work in Durban where I was really in touch with the laity and worked well with the clergy, and because of that, I made many contacts and friends. Overall there has been a general all-round sense of goodwill,” he said.

Fr David has ties to Cape Town, having holidayed there several times with the late Bishop Barry Wood, his fellow Oblate.

He has also been to Cape Town to give retreats for clergy, and preached a mission in Pinelands some years ago.

And the new auxiliary bishop is looking forward to forging further relationships in Cape Town.

“I’m not going to be doing my work in a vacuum, I’ll be working  with Archbishop Stephen Brislin, whom I know reasonably well and is someone I really admire, and of course with the chancery staff, deans, clergy and laity. And on a national level, I’ll be a part of the Southern African Catholic Bishops’ Conference (SACBC).”

Born in 1953 in Durban, Fr David has an undergraduate bachelor of arts degree, studied psychology at Unisa, and did a postgraduate specialisation in community psychology at the Jesuits’ Creighton University in the US. He also holds a licentiate in biblical theology from the Pontifical Gregorian University in Rome.

In 1984 he entered the Congregation of Missionary Oblates of Mary Immaculate and was ordained a priest in 1991. Since his ordination, Fr David has held a number of pastoral roles, including parish vicar, parish priest, formator at the Cebula House of Formation, and lecturer at and subsequently president of St Joseph’s Theological Institute.

Of his leadership as auxiliary bishop, he said: “My style all along has been collegial, I’m a firm believer in collaborative ministry.”

Fr David explained: “I was formed in Durban archdiocese and the catchphrase was ‘community serving humanity’. That was during Archbishop Denis Hurley’s time, and when I was in formation, we formed our scholastics for community life and lived in a community, and I found that to be a driving force behind my leadership style.

“Even when I worked with laity, I was always listening and trying to get us all together to make the most appropriate response,” Fr David said.

The bishop-elect said he is looking forward to making Cape Town his new home, and “I ask that during this transition, that everyone pray for me as I will pray for them”.

At the same time as Pope Francis appointed Fr David as auxiliary in Cape Town he named Bishop Frank Nubuasah SVD of Francistown to the diocese of Gaborone, which he had already administrated since the sudden resignation of Bishop Valentine Seane in 2017.

Bishop Nubuasah, 70, was ordained in Ghana in 1980 and was missioned to Botswana as one of four Divine Word Missionaries.

He spent the next eight years in Maun trying to establish the Church. He did two postgraduate courses at Duquesne University in Pittsburgh in the US where he received a masters arts degree.

Bishop Nubuasah has served Francistown as its vicar-apostolic since 1998 and bishop since 2017, when Francistown was elevated to the status of a diocese.