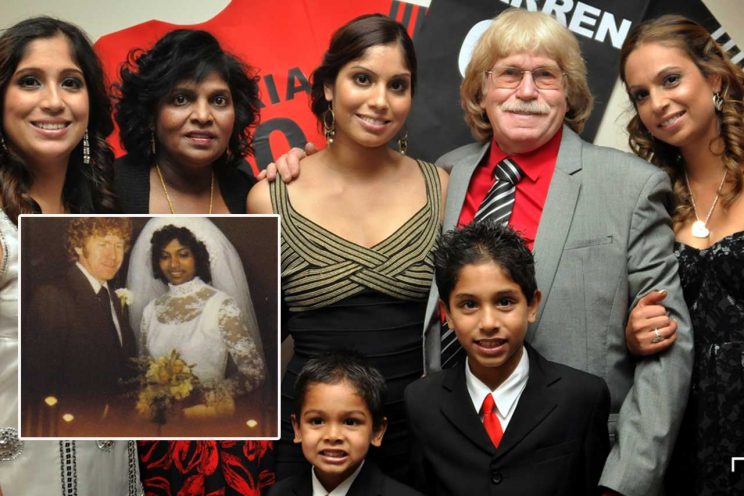 Warren and Gloria Firth at their wedding (left) and with their daughters and grandsons in 2011 (from left) Valerie, Gloria, Helen, Warren and Lorna, with Lorna’s sons Jaiden and Ashwin.

Warren and Gloria Firth are celebrating their 40th wedding anniversary in their home in Christchurch, New Zealand, where they had to move due to apartheid laws. They met in 1978 in London.

He was a Kiwi in England to work and travel, and she a South African, also working and touring Europe.

Their love and marriage overcame different national backgrounds and the apartheid-era laws of the time, for Warren was classified white and Gloria coloured.

Young Catholic Gloria was settled in a London flat, went to St Thomas of Canterbury parish, and got involved with the Lighthouse Group, run by the Mercy Sisters, a place for young people, often from many countries, to meet and socialise.

Warren remembers meeting Gloria when he went to the salon she worked at for a haircut.

“There were many adventures in England, but nothing to equal the amazing thing that happened then. The luckiest haircut ever!” he said.

After his haircut, Warren immediately asked Gloria for a date.

“Being a dancer, I was looking forward to going dancing but much to my surprise, we went to the movies and saw a film called The Unmarried Woman,” she recalled.

Some time later, Warren asked her to marry him. Gloria said yes.

“I found in Warren qualities that I admired, such as respect for my faith as a practising Catholic, honesty, and commitment to a good relationship,” she recalls.

“Fr Baxter of St Thomas suggested that, as my wedding would be illegal in South Africa because of the apartheid laws, we should move to New Zealand. This would enable our parents to be present, and my father would be able to give me away,” Gloria said. “We had a full Nuptial Mass and my father read in church.”

The couple raised three daughters: Lorna, now 38 with two sons in Melbourne; Valerie, 35, who has just had a daughter and lives in Auckland; and Helen, 31, who is engaged and lives and works in London.

“I thank God, my parents, family and friends, and the wider community, for their love and support over the past 40 years,” said Gloria, who still has many contacts in South Africa.

Getting Ready to Take on Marriage

After Divorce, Have Compassion

Bishop Robert Barron: Catholic Church Should Focus on Getting ‘Nones’ Back

Well-known author and speaker Bishop Robert E. Barron of Los Angeles gave a presentation to the U.S. bishops',  on a...