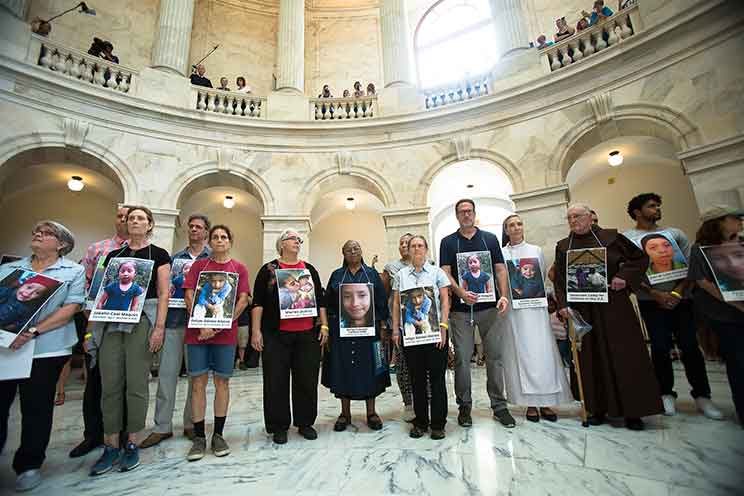 Many of us are not fond of seeing animals in cages. But when desperate human beings – especially children – who have trekked the gruelling, dangerous journey mainly from El Salvador, Guatemala and Honduras fleeing gang drug violence, forced gang recruitment, extortion and crushing poverty finally arrive at the U.S. border pleading for safe asylum find themselves instead crammed into cages, it’s time for people of faith to take a stand and demand an end to this heartless cruelty.

In a recent report by the U.S. Office of Inspector General of the Department of Homeland Security, five Border Patrol facilities in the Texas Rio Grande Valley are in need of immediate attention to address “serious overcrowding and prolonged detention of unaccompanied alien children, families, and single adults” .

The report further cited that children at three of the five Border Patrol facilities had no access to showers, and no laundry facilities. And at two facilities children went days without having a hot meal.

In a separate investigation, a team of lawyers, doctors and advocates warned that children were being held in U.S. Customs and Border Protection facilities in the Rio Grande Valley and El Paso, Texas, “in deplorable conditions, without access to soap, clean water, showers, clean clothing, toilets, toothbrushes, adequate nutrition or adequate sleep. The children, including infants and expectant mothers, are dirty, cold, hungry and sleep-deprived”

And it even gets worse.

Since September 2018, at least seven migrant children – with the youngest being 1 year old – have died in U.S. immigration custody, or soon thereafter. These children simply did not get the care they needed .

All of this cold-hearted lack of compassion should upset and move caring people into action – especially the followers of the one who said, “Let the children come to me and do not prevent them; for the kingdom of God belongs to such as these” (Luke 18:16).

On July 18 over 200 upset, caring Catholic sisters, priests, brothers and lay Catholic advocates, including myself, participated in the “Catholic Day of Action for Immigrant Children” on Capitol Hill in Washington, D.C.

Together we prayed, sang and verbally challenged the U.S. government to stop the immoral and inhumane practise of detaining immigrant children .

Then we peacefully processed into the Russell Senate Office Building stopping under its rotunda, where as a form of nonviolent civil disobedience, five fellow protesters laid on the floor in the form of a cross while 65 others formed a circle around them praying, singing and chanting the names of the dead immigrant children. All 70 were arrested.

Some of the rest of us moved into a connecting hallway and continued praying, that is, until police told us that praying audibly together in the Senate building was forbidden and that we too would be arrested if we continued. Some of us then whispered the rosary  – see  https://bit.ly/2SCd3bZ).

Pope Francis recently warned that when we allow fears and doubts to “condition our way of thinking and acting to the point of making us intolerant, closed and perhaps even – racist” – there is a serious problem.”

Indeed, there is a serious problem!

Humanity May Never Again Get A Chance Like This – Let’s Not Squander It!