Apostleship of the Sea’s Head on His First Year! 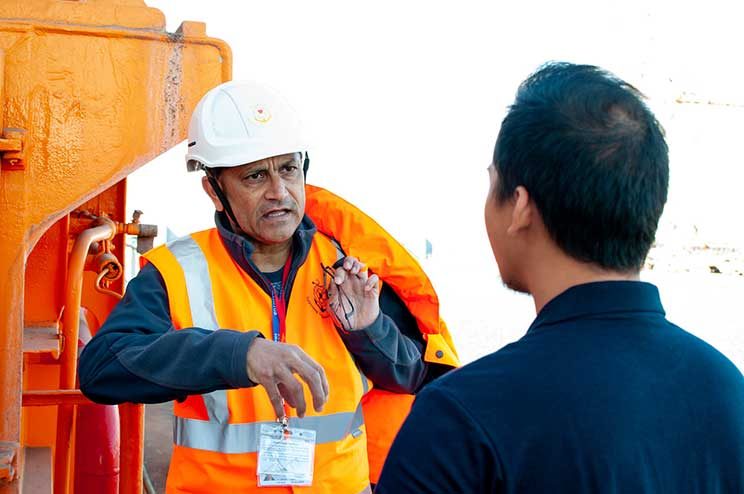 Nicholas Barends, national director of Catholic seafarers’ charity Apostleship of the Sea, in discussion with a sailor on board ship in Cape Town.

A little over a year ago, Nicholas Barends became the national director of Catholic seafarers’ charity Apostleship of the Sea (Stella Maris) South Africa.

The former printer is based in Cape Town, where he goes on board ships to meet sailors who arrive at the port to provide pastoral and practical support when it’s needed.

Before becoming national director, he had been an active volunteer ship visitor for more than ten years.

“One of the best things about working for Stella Maris and our ministry supporting seafarers is to see the gratitude of those we’ve either rescued or helped in some way, and the fact that they trusted us enough to help them,” Mr Barends said.

“Seafarers come from all over the world, and sometimes English isn’t their first language, which can make understanding each other difficult. But we never let that get in the way,” he explained.

To get around the language barrier he uses a translation app on his phone which, Mr Barends said, “comes in handy in such situations”.

Talking of his start as national director, he recalls that the first few months were eventful.

“I was overwhelmed with the difficult cases that were presented to me almost immediately,” he said. “I wasn’t sure if we, the Stella Maris team in Cape Town, were able to help the seafarers who came to us as we had to learn very quickly how to deal with each case, often without the help of the authorities, as time was of the essence before the seafarers and their ships left the port.”

One case that Mr Barends said will always stand out in his mind was that of a 35-year-old seafarer: “He burst out crying in my office as he told me of the abuse he and several of his colleagues had to endure from their senior officers.”

This case had a happy ending, as disciplinary action was taken immediately after intervention. “Within one hour we had the captain on a final written warning with six months’ salary deducted, and the chief mate was fired and lost six months of his salary. The seafarers were ecstatic when they heard the outcome,” Mr Barends said.

“The best part of my job is how my colleagues and I manage to gain the trust of seafarers in a short space of time, as most are very shy and also a bit suspicious of strangers trying to help them and not doing it for any financial gain.”

The main challenge is how to still be able to help seafarers once they leave port. “But we are blessed to have our Stella Maris global network of 227 chaplains in 339 ports across 59 countries who are able to provide follow-on care and support to those seafarers,” Mr Barends said.

Another challenge is to get more people, young and old, in all the major ports of South Africa to volunteer in some way with the ministry to seafarers.

“We need dedicated people, especially in the ports of Durban and Richards Bay,” he said.

The Apostleship of the Sea, the national director explained, “is the only welfare organisation that focuses on the spiritual and practical needs of the seafarers without infringing on any other religions on board the various vessels we visit”.