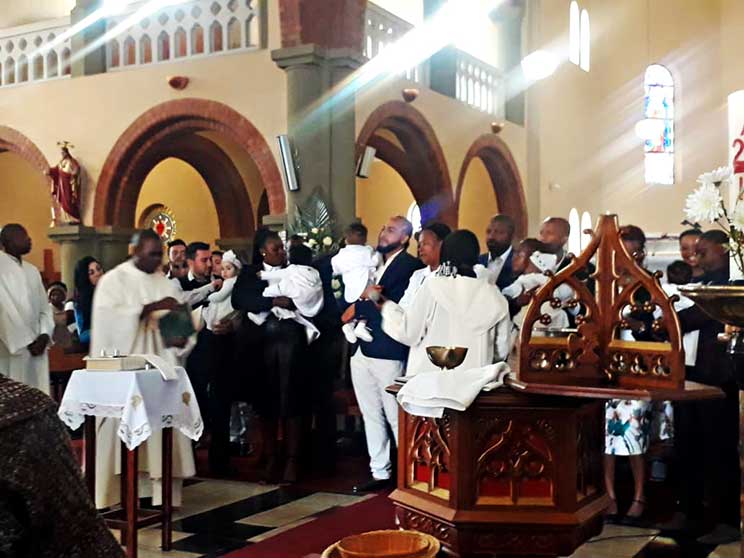 By Selby Makgotho – Celebrating the 87th anniversary of Sacred Heart cathedral in Polokwane diocese, vicar-general Fr Clemens Selemela called on the faithful to never forget the missionaries who contributed immensely to the establishment of churches.

“On this magnificent day, let us pray for the souls of those people who contributed so much to the Catholic faith that we so dearly cherish today. We count ourselves among the blessed to have benefited from their goodwill and the rich legacy that they left us,” Fr Selemela told congregants.

During the Mass, more than ten children were baptised to mark their entry into the Church.

“The children we are baptising today are our torchbearers. They are being baptised on such a significant day and this is a symbol of the good that we expect to come out of them,” Fr Selemela said.

“Go out and defend the Catholic faith. Cherish this moment, for you have been chosen as custodians of our religious beliefs and faith. Yours is a well-destined journey,” said the vicar-general, who is also the parish priest of the cathedral.

Couples who had not had their marriages blessed yet were also called forward.

Fr Selemela said it was a huge challenge that some marriages were not blessed in church and this gave him sleepless nights.

“A marriage that’s not blessed in church is an incomplete one. Let us use this opportunity to invite God to bless our marriages—and the first thing is to come to the altar for blessings,” he said.

About eight couples whose marriages were not yet blessed raised their hands and immediately committed to commence with marriage lessons.