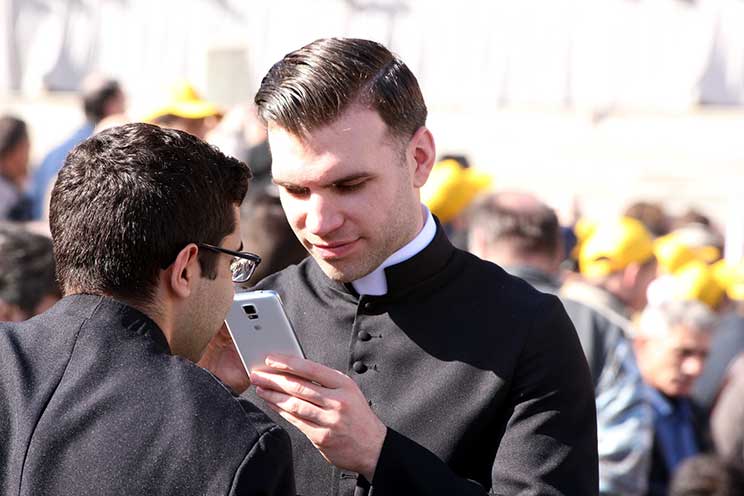 Two young priests. In his article, Chris McDonnell argues that “in the experience of being ‘set aside’ lies the root of clericalism (Photo: Darius Lebok)

By Chris McDonnell – When we come to discuss clericalism, confusion of language can give rise to many problems. Our common sharing, both priests and laity, of baptism is the first calling that unites us all.

How that is ultimately lived out and experienced marks the individual journey that we must take.

Our recognition of clergy as a defined group has become confused with our appreciation of priesthood, that “royal priesthood” we all share, “a priest like Melchizedek of old”.

We need to ask questions relating to our perception of priesthood within community. Trust can only be built on experience of reality — and it is trust that has been severely shaken in recent years, especially by the abuse scandal. How do we repair the damage done to the Church?

I would suggest that it is not about “them” and “us”. Too easily (and understandably) the laity have laid the blame on the ordained clergy when in fact we should recognise that membership of the Church is inclusive.

Those not ordained need to ask a few questions of their own behaviour: How did we let this happen? What brought the abuse scandal into the public domain? When honesty overcame acquiescence, talking began.

Partly it was due to the cult of reverence for the clergy of the ordained. They were trusted without hesitation. Clericalism grew in a protective atmosphere, one priest looking after the other.

Maybe it is in the seminary formation that we should seek out the roots of clericalism; there are certainly questions that we cannot avoid asking. Such questions relate to the detail of selection procedures to enter, the age of entry, and the nature of experience over the years prior to ordination.

Within the seminary more emphasis is now placed on human formation, with an honest attempt to test the suitability of those following a journey of discernment.

Where there are concerns, of whatever nature, then there is a responsibility to voice them for the benefit of all, none more so than the seminary student himself.

After these years of “process”, the young priest emerges to the experience of work in a parish.

The Irish writer Seamus Heaney describes one such priest with these words: “I saw a young priest, glossy as a blackbird, as if he had stepped from his anointing a moment ago; his purple stole and cord or cincture tied loosely, his polished shoes unexpectedly secular beneath a pleated, lace-hemmed alb of linen cloth.”

In the experience of being “set aside” lies the root of the clerical club we label clericalism. People come to believe the expectation that is placed on them and so live up to such expectations. Within this closed cultural circle, protectionism flourishes.

It comes not only with the singular way of life but in the honorifics, forms of address, and the dress code that provides the hiding place for the insecurity of some.

There are those priests who are never seen without their collar and cassock — a line of demarcation is drawn that it is hard to cross.

It is this “otherness” that must be the focus of our examination. How has it come about and what continues to encourage it?

Being an ordained priest should be about service, not status. Arrival in a parish might be new for the priest but he should always remember that he comes to serve an existing community, one that has roots and heritage, a life that goes back many years.

We have been told in no uncertain terms where Pope Francis stands on clericalism. In a homily in December 2016 he said:

It happens “when the cleric doesn’t have time to listen to those who are suffering, the poor, the sick, the imprisoned”, Pope Francis said.

“The evil of clericalism is a really awful thing; it is a new edition of this ancient evil” — of the religious “authorities”lording it over others.

But, the pope said, “the victim is the same: the poor and humble people, who await the Lord.”

His position is clear; he will have none of it. For him it is a prime source of damage within the Christian community.

The Christian Church has a future to look forward to, in spite of our evident failings.

On a journey, when the map has been misread, it is time to pause, look again and re-set the compass.

This is an edited version of a longer article published in the Dominican Journal Spirituality.