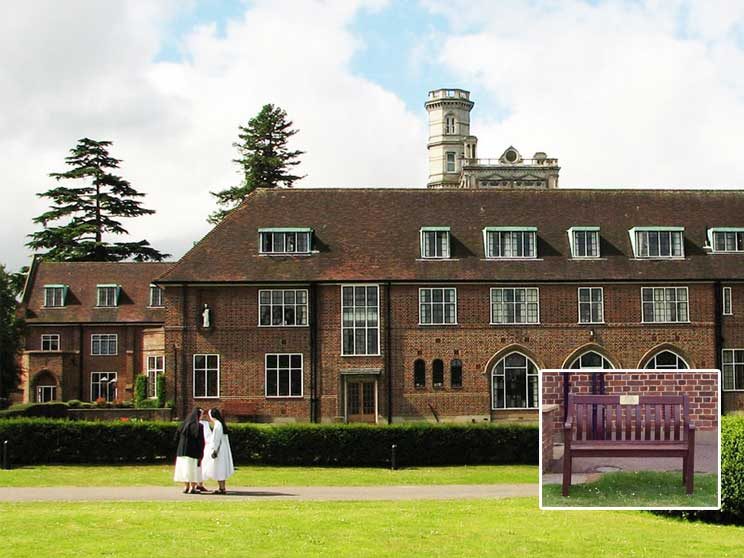 Rosary priory in Bushey Heath, near London. (Inset) The bench dedicated to the late Paddy Kearney before it was moved to stand beneath an oak dedicated to Archbishop Hurley.

Archbishop Denis Hurley and his late friend and biographer Paddy Kearney are united again at a Dominican priory in England.

A new bench was dedicated to Mr Kearney beneath an oak dedicated to the late archbishop at Rosary priory in Bushey Heath, near London.

“After Archbishop Hurley’s funeral I brought back some acorns from South Africa and planted them” at the priory, Dominican Sister Marie-Henry Keane told The Southern Cross.

“They did not take, so I tried again with seedlings from the New Forest in England. I planted two of them in a pot. They took,” she said.

“When Bishop Kevin Dowling of Rustenburg came to visit us, he transferred the young Hurley oak.  It now stands over 9m high.”

The members of the London-based Denis Hurley Association then decided to dedicate a bench to Paddy Kearney and put it under the Hurley oak.

“There they stand in memory to two magnificent, godly men,” Sr Keane said.

The plaque on the bench describes Mr Kearney as a “brave and humble man who opened doors for others; the poor, the disenfranchised, and those discriminated against in South Africa”.