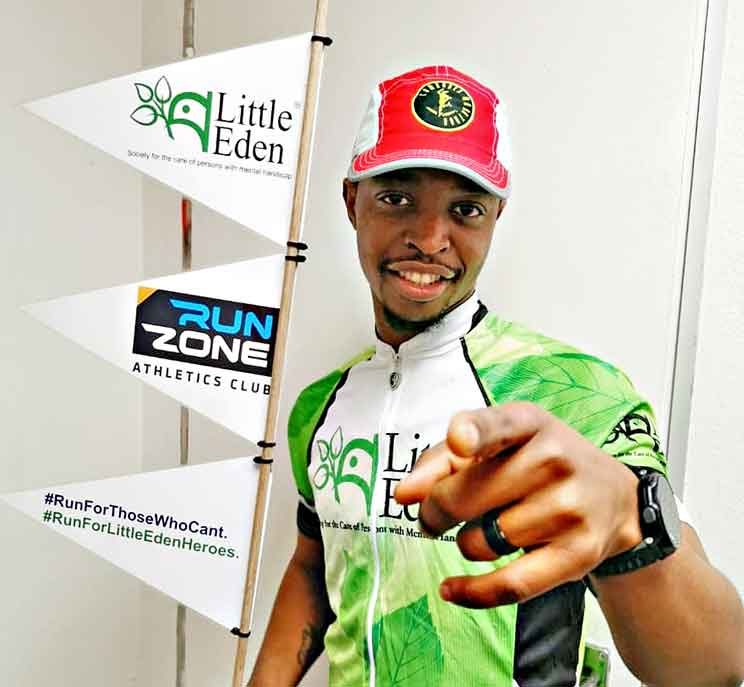 By Daluxolo Moloantoa – In this age of communication via hashtags, two of these came in handy for a runner whose mission is to create awareness and raise much-needed funds for the Little Eden Society, the home for intellectually-challenged children and adults in Edenvale, Johannesburg.

The two hashtags, #I’llRunForThoseWhoCan’t and #67MinuteRun helped Sipho Marima, 28, put his activities in the public eye in aid of the home on Mandela Day.

Mr Marima, branch general manager of EdenGlen Virgin Active gym, first crossed paths with the home when his gym was invited by Little Eden for its annual fête in April.

After the fête he felt this was not the end of the road between him and the home. After running the Comrades Marathon in June, Mr Marima returned to Little Eden with an idea to help in its awareness campaign and fundraising drives through running.

“The running community is big and so loving; runners are supportive towards one another and others, and that’s when I decided to help the home through running and involved other runners,” he explained.

Running started off as a therapeutic process for him after Mr Marima went through an unfortunate experience in his family, and it just never stopped from there.

“When I am running, I am happy. You meet great people through running and it’s amazing how united runners are,” he said.

For Mandela Day, his colleagues at the gym rolled up their sleeves and helped him to prepare for the day. They ran a mock-run with him to mark the route for the run, and even handled the logistics to donate lost property from the gym to the home.

“After the run we spent some time doing arts and craft with the residents,” Mr Marima said.

Some of his staff also “expressed how they would like to come back to visit again and get to know the residents better”, Mr Marima said. “For me, that’s the whole purpose; to create awareness and get more involved in the home.”

Little Eden receives 45% of its monthly income from the government. Funds are needed on a constant basis to keep its 300 residents fully cared for through daily care, food, clothing, nappies and other necessities.

Mr Marima aims to raise R10000 by the end of September for the home in two events. On August 17 he will participate in his first triathlon, and on September 15 he will run in the Sanlam Cape Town Marathon, also for the first time.

He has also initiated a Back-a-Buddy campaign to help him reach his target.

“My initiative is not huge, however, the money raised can go a long way for the home,” Mr Marima said.

“The number of nappies raised can make a huge difference in the lives of the residents. It is not a one-time thing. I will continue doing my best to help the home.

“Creating awareness for Little Eden also helps because when people realise that we all have an extra home that needs us, then they will also come through to be of assistance.”

Mr Marima’s efforts have not gone unheeded, especially by the home’s management. “Sipho has a natural ability to inspire others through his commitment, and through his running. His campaign is really remarkable,” said Little Eden chief executive officer Xelda Rohrbeck.