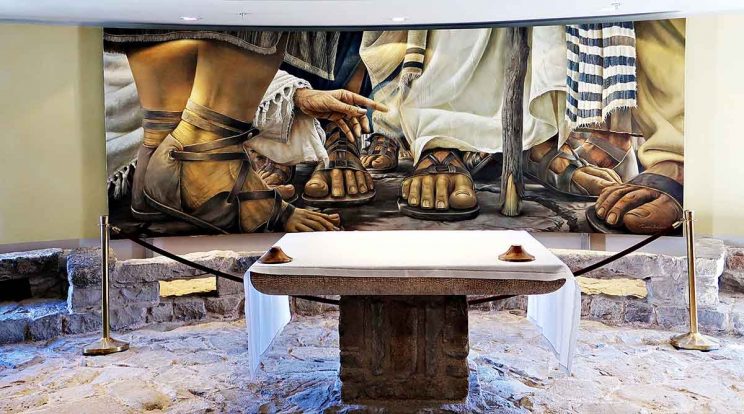 The woman touching the hem of Jesus’ garment is depicted in the Duc in Altum church in Magdala, the home town of Mary Magdalene at the Sea of Galilee. (Photo: Günther Simmermacher)

Fr Ralph de Hahn looks at the women in the Gospel of St Luke, which we follow in the present liturgical year.

Luke the Evangelist tells us that he did much researching among eyewitnesses who personally had known and heard the Master Jesus in his three-year ministry on earth.

Luke is the only gentile evangelist, a physician, an artist, and very human in his easy approach to the subject matter. Indeed, he is also a very good Greek scholar. He offers a popular account of Jesus’ life, parables and miracles.

He is careful to emphasise the Master’s compassion for the unfortunate and downtrodden people; also his dependence on prayer before his mission and his trust in the Holy Spirit.

What is, furthermore, very striking is the attention Luke gives to the women in these years of ministry. He certainly exalts womanhood.

He offers us a beautiful, carefully worded account of the Archangel Gabriel’s visit to the virgin maid of Nazareth, followed by that exciting encounter with Elizabeth, with the “Magnificat” as the hymn of praise and thanksgiving.

The joy of both Mary and Elizabeth is evident at the birth of John the Baptist. Luke expresses his concern and care for the difficult pregnancy of the young virgin mother, and one can feel his joy and relief as the Angel of God informs the shepherds of his silent birth in a cattle shed in Bethlehem.

And when the child is presented before Simeon in the temple, we hear of Anna, the 84-year-old widow who, with Simeon, was longing for the coming of the messiah.

Jesus grew into manhood in Nazareth, and Mary was the mother who, over those 30 years, “stored all these things in her heart”.

With reference to the murder of the Baptiser, Luke mentions the unlawful relationship of King Herod Antipas and his brother’s wife, Herodias, who used her daughter Salome’s allure to demand the head of John.

In Luke we witness Jesus’ visit to Peter’s mother–in-law. She is suffering from a dangerously high fever and Jesus is at her bedside to heal her by his gentle touch.

At the gates of Nain, at the foot of Mount Tabor in Galilee, Jesus stops to witness a funeral procession.

He is moved by compassion, for the dead young man is the only son of his widow mother. Here we must know that without a husband or a son, this widow was facing a life of extreme poverty.

Jesus halts the funeral procession and raises the young man to life. Note how beautifully Luke ends his story: “…and Jesus gave him back to his mother.”

Luke’s account of the woman “with a bad name in the town” is another refreshing story of the power and compassion of the Lord towards the sinful woman who washed Jesus’ feet with her hair and anointed them with oil.

Although the house is filled with only men—none of whom took care of the Lord’s feet—this woman is, in fact, the glittering star.

The Lord rebukes his host, grants total pardon to the woman because of her love and staggering repentance, and whispers: “Go now, your faith has saved you” (Lk 7:48).

In chapter 8, Luke tells of the many women who accompanied the apostles “through towns and villages proclaiming the Good News of the Kingdom”.

He names only a few, such as Mary of Magdala, Joanna the wife of Herod’s steward Chuza, Susanna and several others. Some of them we’ll meet again at the empty tomb on Easter morning.

Another story of divine compassion: Jesus is summoned to the house of Jairus, the head of a synagogue, whose 12-year-old daughter has apparently died. Jesus raises the girl back to life.

Again, the Lord gave her back to her pleading father.

However, on the way to the home of Jairus, excited crowds were pressing against Jesus. Just then, a woman, suffering from a blood issue over 12 years, stretched forward to touch only the hem of his garment, believing in his love and power. Jesus stopped, asking who it was, knowing that power had gone out of him (Lk 8:47). This woman, too, was totally healed.

Again at a public gathering, a woman’s voice cries out in admiration “Blessed is the womb that bore you!” But Jesus replies: “Happier still are those who hear the Word of God, and keep it.”

In the course of his journey Jesus would often nestle in the comforting home of Lazarus, whose sisters were Mary and Martha, in Bethany, a small town on the other side of the Mount of Olives.

On this occasion, Martha complains that while Mary is resting at his feet, she is left alone with many home commitments. Jesus then makes a profound statement: “Only one thing is necessary, and Mary has chosen the better part.”

There is another amazing tale of the woman “the daughter of Abraham” who, over 18 years, was possessed by “a spirit which left her enfeebled and was bent double”.

Now, this took place in the synagogue, and on the Sabbath. Despite the anger and threats of the Pharisees, Jesus again shows his infinite compassion and heals her (Lk 13)

Jesus watches the rich people dropping their offerings into the treasury, but his heart goes out to the poverty-stricken widow who, offering only two small coins “has put in more than any of them”(them” (Lk 21).

Luke speaks of the Lord’s infinite mercy and compassion in his two brilliant stories, namely the Good Samaritan and the father of the Prodigal son. The key here is the attribute of mercy.

But Jesus was condemned and tortured by the Roman authorities without any mercy.

Women in the Passion

On his way of the Cross, it was to the women, the daughters of Jerusalem, that he spoke: “Weep not for me but weep rather for yourselves and for your children” (Lk 23:28).

Finally, at the death scene with the dark clouds hovering above, and mockery and abuse being hurled at the Crucified, the sun was eclipsed, the veil of the temple was torn right down the middle, the crowds dashed off in fear and trembling, as also the apostles.

Remaining at the cross were the fearless women who had accompanied him from Galilee.

The women, says Luke, took note of the burial place: “Meanwhile the women who had come from Galilee with Jesus were following behind. They took note of the tomb and how the body had been laid. Then they returned and prepared spices and ointments. And on the Sabbath day they rested, as the Law required.”

At dawn on the first day of the week, they went to the tomb with special spices which they had prepared.

Luke names two but there were others: “The women were Mary of Magdala, Joanna, and Mary the mother of James. And the other women with them…”

The tomb was empty. He had risen. Surprised and confused the women then carried the unbelievable message to the frightened apostles.

As we know so well, Mary Magdalene had that first recorded encounter with the Risen Lord, but Luke omits that.

We then fast-forward to the Acts of the Apostles, which Luke wrote.

Having witnessed the ascension of the Lord and his command to proclaim the Good News to all the world, we find the disciples—men and women—gathered around Mary, the mother of the Lord, to await the promise of the Holy Spirit.

Yes, around Mary, for Jesus from the Cross had told them to “behold your mother!”

Indeed, Luke has without question exalted womanhood in his beautiful Gospel.