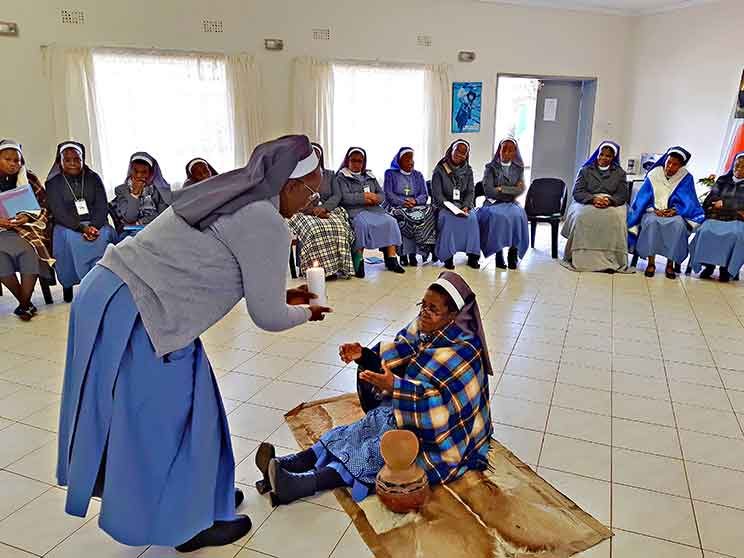 Sr Boitumelo Matlhabe is given a lit candle after her election as the new superior-general of the Sisters of Charity, as a sign of being the light of the congregation

By Sr Phatsimo Veronica Ramokgwebana SC – A  Christian Brother who facilitated the general chapter of the 53-year-old Sisters of Calvary in Botswana said the congregation’s joy was observable in what the Sisters had in common: a love for Jesus and a shared youthfulness.

Br Michael Burke, of Boksburg in the archdiocese of Johannesburg, said it was a privilege for him to facilitate the congregation’s sixth general chapter at St Gaspar Bertoni Retreat Centre in Notwane.

“I find it a privilege to deal with people who are striving to be their best, looking at the way to go and into the future, looking sincerely at themselves as they are,” he said.

He found the Sisters to be a very joyful group. “Clearly that joy does not just come from scenes of having a party together but I think it comes from something much deeper: the attraction to follow Jesus which they have in common, and also a youthfulness — a combination of senior and junior Sisters as well as young ones. It’s lovely to see the mix and the way that they respect and need each other.”

The chapter was attended by 31 of the congregation’s 35 finally-professed Sisters. Their main focus was on studying more profoundly the charism of the institute, to evaluate the congregation’s journey, to deal with general problems, and to set lines of action for the future.

It also elected the superior-general and her councillors.

After a Mass celebrated by Fr Andrew Makgetla CP, vicar general of the diocese of Gaborone, the chapter elected Sr Boitumelo Matlhabe as the new superior-general, and Sr Bernadette Masekamela as vicaress. The council members are Srs Masego Ramaphoi,  Seipato Moumakwa and Otsetswe Musindo.

“There is nothing we can do without your support,” Sr Boitumelo told her fellow Sisters.

“I promise that I will do my best to take the congregation to the highest level, and I can only do that and succeed with your cooperation. I know you, my Sisters, and I know that if you want to do something you will succeed in it,” she said, also invoking “God’s help and guidance”.

“The congregation is only 53 years old and already showing positive signs of having youthful Sisters, and it is the mandate of older sisters who have been in the congregation for a very long time to groom the young Sisters,” she said.

“If they see good things from us, they will also follow suit, they will work hard if they see us working hard, they will live out their commitment to their level best if they see us. Thus the theme of this Chapter has reminded us of who we are what we have been founded for and what is expected of us,” she said.