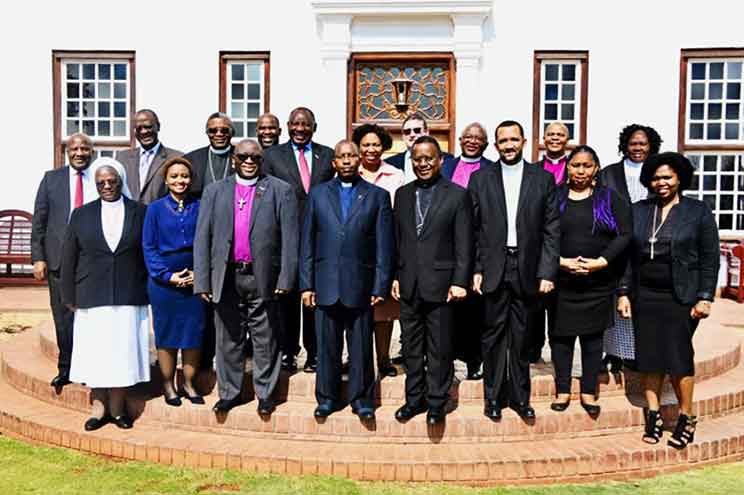 President Cyril Ramaphosa agreed with Church leaders that things need to improve in South Africa, and pledged to meet again with the Christian leaders.

“President Ramaphosa was keen and eager to meet with us and received us very well,” Bishop Sipuka told The Southern Cross.

“He listened with openness to our observations about the state of the country, and also expressed his view.”

Sr Makoro CPS echoed the impression that the president was open and honest when engaging on critical matters, especially the economic situation.

Bishop Sipuka said his overall impression was that the president means well, and wants to take things forward.

“President Ramaphosa agreed with us that things are not good. He acknowledged that there are difficulties, but reassured us that the government is working on it,” Bishop Sipuka said.

Mr Ramaphosa had a big delegation of ministers with him, which gives the impression that he takes our concerns seriously,” he added.

“He is keen to continue to talk with us and said the next time the meeting should be held at the SACC headquarters.”

The SACC delegation was led by its president, Methodist Bishop Ziphozihle Siwa and its general-secretary, Ethiopian Episcopal Bishop Malusi Mpumlwana.

The delegation presented a range of initiatives the SACC will undertake. These can be a collaboration with various levels of government.

While commending the president for the sense of hope that his administration represents, the council also raised issues of concern, including the high level of unemployment, especially among the youth; the rising levels of poverty and inequality; the scourge of substance abuse; and the need for everyone to act in ways that restore hope to the nation.

The council also brought to the president’s attention the outcome of its 18 month-long National Convention of South Africa initiative, a vehicle for public engagement and the mobilising of technical expertise to craft practical solutions to “Reimagine, Reorganise, Rebuild the South Africa we pray for”. It culminated in the launch of a Civil Society Manifesto in March.

The SACC is an interdenominational forum that unites 36 member churches and organisations, including the Catholic Church.