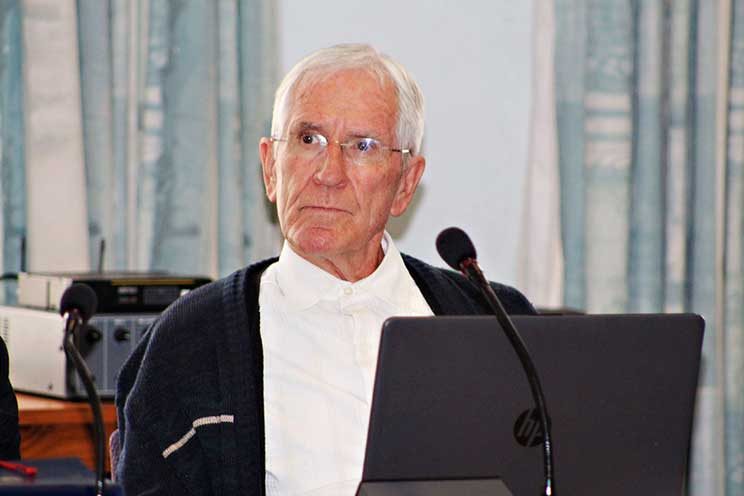 By Dennis Sadowski – Bishop Kevin Dowling of Rustenburg and Marie Dennis of Washington have handed over their co-presidency of Pax Christi International to a French bishop and a Kenyan Sister.

They had led the Catholic peace movement for three terms, a total of nine years.

They see such training as necessary so that eventually dialogue and communication become the prime options to resolve differences rather than the use of hateful words, physical attacks and even warfare.

“Non-violence is very, very important,” Sr Wachira said. “We have to try. It may take a long time and we may be going against the grain, but I believe we must move in the right direction.”

Both peace leaders have promoted non-violence in their ministry roles. Sr Wachira has been a teacher and principal in Loreto-run schools in the East Africa nation, concentrating on training young women for peacemaking and reconciliation work.

She also advises her congregation’s office at the United Nations in New York on the role of peacemaking in the world’s trouble spots.

Bishop Stenger has written on non-violence and the importance of building a culture of peace in local communities for years. His involvement with the Catholic peace organisation dates to 1999, when the French bishops’ conference proposed he become president of that country’s Pax Christi body.

The bishop has also addressed the precarious situation of Christians in Iraq, and after a 2002 visit to Colombia, which then was in the midst of a long-running civil war, he called on all parties to respect human rights in order to achieve peace.

The bishop expressed concern that the world’s nuclear powers are seeking to expand their nuclear weapon arsenals after decades of reductions. Plus, he said, the widening distribution of conventional arms is destabilising societies and increasing injustice in many nations, causing people to flee for safer lands.

Bishop Stenger said the Church’s worldwide presence gives it the opportunity to share new strategies to replace policies that have failed to achieve justice for all people, especially the poor and vulnerable.

“To motivate people to act and advocate, we must show them the challenges of the future in a clear way and make each Catholic discover that the commitment to peace is a missionary responsibility,” he said.—CNS

The president of the Southern African Catholic Bishops’ Conference (SACBC) has called on Church leaders to come out of the...