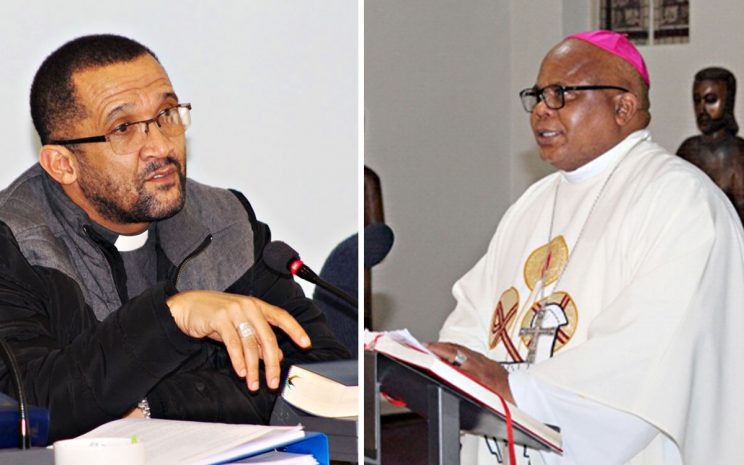 The president of the Southern African Catholic Bishops’ Conference (SACBC) has called on Church leaders to come out of the sacristies and be with the people who are left alone in desperate situations — not leaving it to the Economic Freedom Fighters (EFF) alone to articulate the concerns of the poor.

Addressing the SACBC’s mid-year plenary meeting in Mariannhill, Bishop Sithembele Sipuka of Mthatha, said that Church leaders had “retreated to the sacristies and occasional pastoral statements” instead of being present to people who are left alone in desperate situations.

He noted the prevalence of violent protests throughout South Africa, saying that those who protest often undermine their cause and look unreasonable because they “destroy facilities they have in order to get another facility. If they want a road, they will destroy a clinic, and if they are angry against crime they burn a school”.

“Part of this violence is due, I think, to our absence as Church leaders. When people are left alone in desperate situations, they resort to emotionally desperate and destructive measures,” he said.

Bishop Sipuka said that Church leaders can play a role, as they did during the apartheid years.

As it was in the struggle against apartheid, he said, some protests which are potentially destructive can become constructive if Church leaders accompany the people to “facilitate a more constructive engagement with elected leaders”.

The SACBC president said that South Africa’s economic system “is failing to reduce poverty [and], except for the EFF, we are afraid to robustly deal with it”.

“There is a tendency to accept the system of economy as something about which nothing can be said, as something sacrosanct. This reluctance to deal with the skewed economic system manifested in the recent debates on whether the Reserve Bank should concern itself only with the stability of the rand or to also include provision for it to play a role in development and employment,” Bishop Sipuka said.

“I am not clued up about the merits or demerits of changing the mandate of the Reserve Bank, but one thing that is clear to everyone, is that the present system of economy to which the Reserve Bank is closely linked is benefitting very few people and the majority are left out,” he said.

“Given the enormity of economic inequality in the world, and with our country counted among those with the widest gap between the rich and the poor, there should be no institution that is insulated from dealing with this problem,” he said.

In light of the Catholic Church’s long tradition of social teachings, the Church “must make a contribution on the debates about possibilities of an economy that is inclusive,” Bishop Sipuka said.

“The concerns about the economy cannot be allowed to be the domain of the Economic Freedom Fighters alone.”

Bishop Duncan Tsoke, auxiliary in Johannesburg, called on the Church to give people hope in their experience of economic hardships.

“They are waiting to receive from us a message of hope. We should not disappoint them,” he told his brother bishops.

“They want an assurance from us, as bishops, that, although we are in a state of technical recession and political uncertainties, God has not abandoned us. God is walking with us as a nation, both during the daytime and night time.”

During apartheid and now 25 years after the first democratic election, “God has been patient with us as a nation”, Bishop Tsoke said.

But, Bishop Tsoke noted: “Although we have sometimes made efforts to self-destruct as a nation, God has not destroyed us. To echo the words of Pope Francis, although we are tired of asking for God’s forgiveness, God is not yet tired of forgiving us, cleansing us and healing us as a nation.

“And this should be the message of hope that we as bishops should announce to the nation,” he said.

Bishop: Church Must Work To End Violence Against People With Albinism
Share