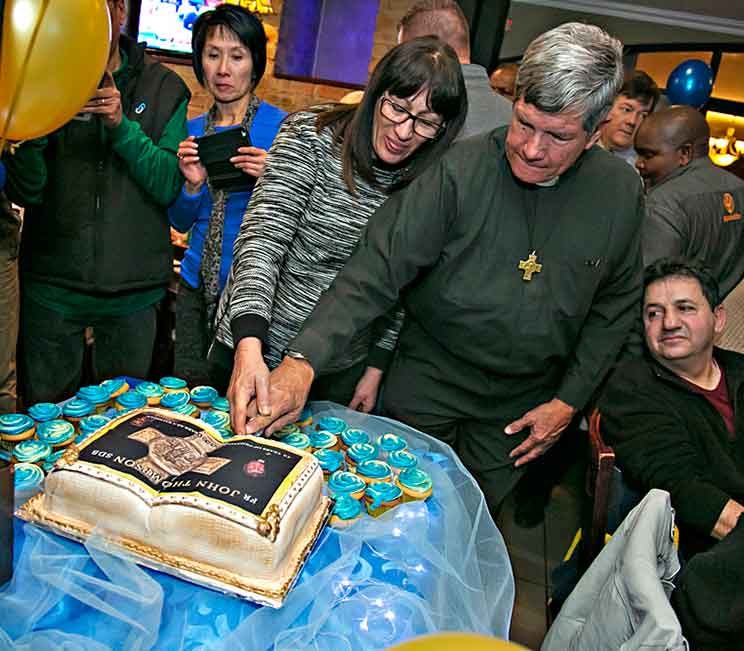 Fr John Thompson SDB cuts a cake to mark his 40th anniversary of ordination, with the help of the baker, at Robertsham parish in Johannesburg. (Photo: Sheldon Reddiar)

By Roy Newton-Barker – Celebrating 40 years of his priesthood, Salesian Father John Thompson recalled his journey from growing up in the United States to becoming a missionary in war-ravaged countries before landing up in Robertsham, Johannesburg, where a jubilee Mass was celebrated.

The celebration also marked his 50 years as a Salesian, having entered the congregation at 18.

The Mass was concelebrated by some of the priests whom Fr Thompson had interacted with in West Africa and in Southern Africa, including Salesian Fathers Vincent Nguyen, Mikal Garmendia, Robert Gore and Michael Connell, as well as Fr Jorge Guerra CS of La Rochelle parish.

Fr Thompson recalled how in his mid-teen years he desired to become a Salesian priest. He joined a secondary school in New York and studied in New Jersey. Her then taught secondary education at two Salesian schools, graduated in theology and was ordained a priest in 1978.

He then started serving God as a missionary priest “in the bush” in war-ravaged Liberia, Sierra Leone and Nigeria, where he built several churches and schools.

Fr Thompson faced several life-threatening situations due to his outspoken issues on human rights violations and was often jailed.

He was then transferred to Swaziland and in 2009 appointed to South Africa. After two months in Cape Town, he eventually came to Robertsham, where life was generally much more “normal” for a priest.

In late 2018, Fr Thompson accepted a new position in Lesotho where he is again facing the challenge of leading an impoverished community and learning the local language.

Many of his old Johannesburg parishioners enthusiastically contributed towards a fund-raising effort for Fr Thompson’s Lesotho parish.

Special guests at the jubilee Mass and dinner were Fr Thompson’s younger brother, Paul and his wife Grace, who had arrived earlier that day from the United States.

Free University! But How?