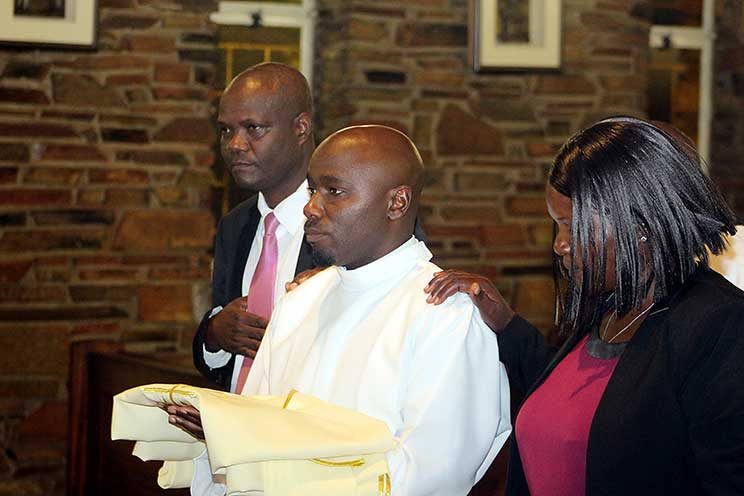 Tanzanian Stigmatine Deacon Herbert Chunga, with his parents, at his ordination in Pretoria North.

When he was a young novice in the Stigmatine congregation in Tanzania, Herbert Chunga had no idea he would be ordained a deacon in distant South Africa.

Deacon Chunga was ordained to the transitory diaconate by Archbishop Dabula Mpako of Pretoria at St John the Baptist church in Pretoria North, one of the parishes built by the Congregation of the Sacred Stigmata, as the Stigmatines are formally known.

He is the first Tanzanian Stigmatine from his village to become a deacon.

“When I joined the Stigmatines as a young person from Msolwa village in Tanzania, nobody believed I would make it to the end, because those who joined before me had failed to do so,” Deacon Chunga said.

He has been assigned to work in the Ten Morgen and Winterveldt Stigmatine pastoral areas, in the north-western deanery of Pretoria archdiocese.

He will stay in the community of Jangwane during his tenure as a transitory deacon.

In Msolwa, in the Kilosa district of Tanzania, Deacon Chunga attended St Gaspar Bertoni Secondary School, built in 1994 by the first Stigmatine missionaries in Tanzania.

St Gaspar has constantly promoted quality education and human formation for the youth of Tanzania, rich and poor alike.

Since its establishment, the Stigmatines have helped the disadvantaged youth of Msolwa through special funds organised to help them pay for school fees.

One of the students who benefited from these bursaries was Herbert Chunga, who completed high school in 2010.

Deacon Chunga said he has witnessed the outstanding contribution of the Stigmatines in transforming the poor village of Msolwa.

Today, he said, it is one of the best-known villages because of their work.

“Many people from the village are working for the Stigmatines, and out of that they are able to provide a better life for their families and quality education for their children,” Deacon Chunga said.

How Deacons are Called to Serve

2 Priests and Deacon for the Archdiocese of Cape Town!