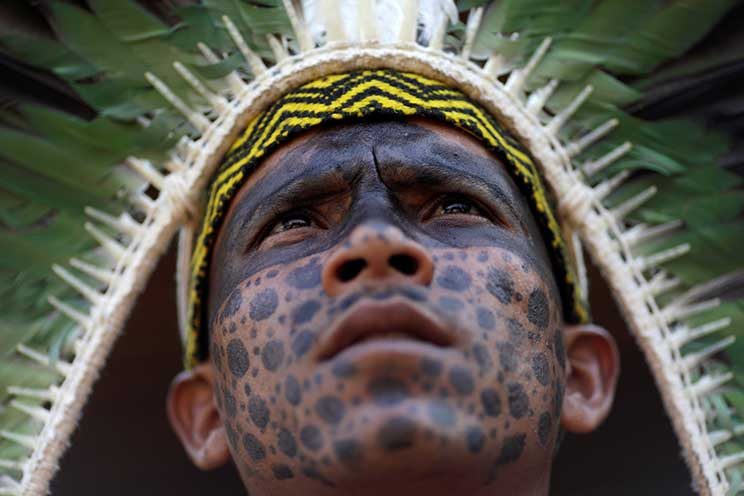 A member of the Shanenawa tribe observes an indigenous dance during a festival to celebrate nature and ask for an end to the burning of the Amazon, in the indigenous village of Morada Nova near Feijo, Brazil. The Brazilian Catholic bishops are pressuring the government to guarantee the safety of several Amazonian indigenous peoples. (CNS photo/Ueslei Marcelino, Reuters)

By Eduardo Campos Lima – After denouncing the record number of wildfires in the Amazon in August and the growing deforestation of the region, the Brazilian Catholic Church is pressuring the government to guarantee the safety of several Amazonian indigenous peoples, alerting the authorities of the imminent risk of genocide in northern Brazil.

“No indigenous people feels safe in Brazil right now. But the situation is particularly serious in the Amazonian state of Rondonia, where the peoples Uru-eu-wau-wau and Karipuna had their lands invaded, and in the state of Para, where the people Xikrin lives,” said Archbishop Roque Paloschi of Porto Velho, president of the Indigenous Missionary Council, or CIMI, a committee of Brazilian bishops’ conference.

On Aug. 27, CIMI released a statement condemning President Jair Bolsonaro’s verbal attacks on the indigenous peoples of the Amazon.

“Amid the environmental destruction caused by deforestation and criminal wildfires, especially in the Amazonian region, he maintains an incendiary attitude, with a repugnant aggressiveness directed to the native peoples and their right to a dignified existence,” said CIMI’s statement.

Since his campaign in 2018, Bolsonaro has criticised environmental legislation and the “excessive number” of indigenous reservations, promising to loosen restrictions on activities that affect the environment and to stop recognising indigenous territories. On Aug.30, he again told journalists that “no new indigenous land” would be granted by the government, only the ones that he is “obliged” to demarcate.

Cleanton Curioso, a lay missionary and CIMI’s coordinator in Altamira, said Bolsonaro’s comments have created a “feeling of impunity” among indigenous land invaders.

“Hundreds of illegal miners, illegal loggers, and land-grabbers invaded the indigenous reservation Trincheira Bacaja in 2016. They destroyed the forests, started wildfires and even built a village, but the authorities didn’t do anything. So now the Xikrin people decided to expel the invaders with their own hands,” Curioso told Catholic News Service.

In late August, dozens of Xikrin men walked several miles in the reservation and reached the invaders’ camp. They told the men to leave the area and took the invaders’ guns and the equipment used to destroy the rainforest.

“Now they’re being threatened by the invaders. There’s a big risk of violent conflict in the area, especially if the authorities fail to act,” said Curioso.

About 1,200 indigenous people live in 16 villages in the reservation, which is shared by the Xikrin and two other nations.

In Rondonia, the reservation of the Karipuna people was invaded in 2015, but invaders have intensified their illegal activities – mining, logging and land-grabbing — since Bolsonaro’s election, said Sister Laura Vicuna Manso, a missionary in the region. “The invaders use the social media to threaten the Karipuna, saying they will set fire to their villages and kill them all. As I was sleeping there, several times I could hear their machines operating and gunshots during the night.”

Sister Manso said at least 30 wildfires inside the Karipuna reservation could be spotted in satellite images.

“The invaders are certainly the perpetrators of the fires. They said on the internet they would do it after Aug. 20. It’s an orchestrated criminal action,” she said. She said more than 27,000 acres of rainforest on the reservation were destroyed in recent years.

On Aug. 25, the Brazilian magazine Globo Rural published a story on the wildfires criminally provoked in the city of Altamira by miners and farmers. According to the article, a group of 70 people organised the biggest wildfire in the history of the state of Para Aug. 10, an event they called “day of fire.”

Environmentalists and religious, like Sister Manso, believe this kind of operation was reproduced in other regions as well.

But Jesus Sergio, a Brazilian congressman and a member of the parliamentary bloc that represents agribusiness, said he did not believe big business was involved.

“I don’t believe that farmers who operate within the law and big mining companies would engage in violence against indigenous peoples,” he said. “I think illegal miners are behind such acts.”

He added that agribusiness also has had losses with the deforestation and the wildfires in the Amazon. “Many times the fires reach their properties.”

Archbishop Paloschi said he believes the interests of large-scale landowners in the Amazon are behind the deforestation and the attacks against the indigenous peoples.

“Many people don’t get their hands dirty, but obtain profits from such acts. The Brazilian history shows us who are the most privileged people throughout the decades of destruction of the Amazon,” he said.