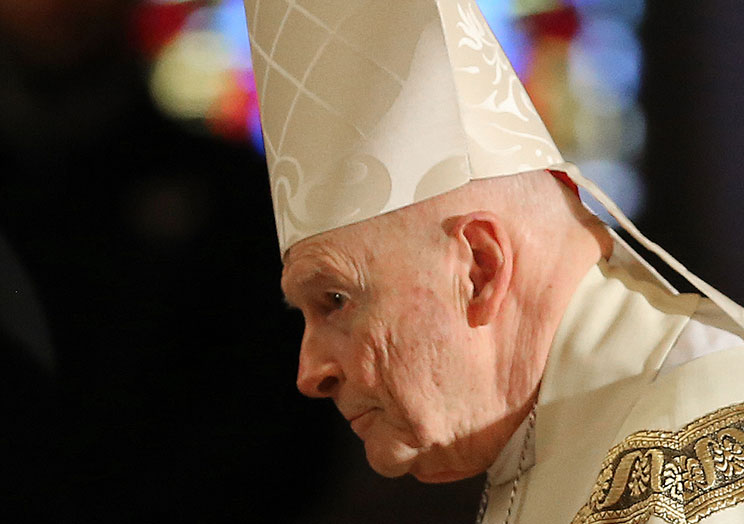 Theodore McCarrick, a former cardinal and archbishop of Washington and Newark, N.J., arrives for the Jan. 1, 2017, installation Mass of Cardinal Joseph W. Tobin at the Cathedral Basilica of the Sacred Heart in Newark. A yearlong investigation by Seton Hall University confirmed that McCarrick, the laicized cardinal who had been archbishop of Newark from 1986 to 2000, had sexually harassed seminarians during his tenure as head of the archdiocese. (CNS photo/Bob Roller)

A yearlong investigation by Seton Hall University confirmed that Theodore McCarrick, the laicised cardinal who had been archbishop of Newark from 1986 to 2000, had sexually harassed seminarians during his tenure as head of the archdiocese.

“McCarrick created a culture of fear and intimidation that supported his personal objectives. McCarrick used his position of power as then-archbishop of Newark to sexually harass seminarians,” said the 700-word “update,” . “No minors or other (Seton Hall) university students were determined to have been affected by McCarrick.”

The review was conducted by the law firm of Latham & Watkins, which may be best known for leading the investigation into the “Deflategate” scandal during a January 2015 NFL playoff game between New England and Indianapolis.

“The review found that the university’s Title IX policies are consistent with state and federal law,” Seton Hall said.

The update made little other mention of McCarrick, except to say: “Individuals, communities and parishes across the country have been affected by former archbishop McCarrick and others who have profoundly and forever negatively altered so many lives.”

McCarrick, as Newark archbishop, was president of the board of trustees at Seton Hall, which is sponsored by the archdiocese. The seminaries are located on the Seton Hall campus.
University officials told NJ.com, the common website for more than a dozen newspapers in New Jersey owned by Advance Media, that it could not disclose more about the findings because of federal privacy laws and Seton Hall policies.

The university’s board of regents approved a five-point program to “strengthen the university’s compliance systems and governance structures” and reported that progress was made on all five fronts, with continued progress yet to come in the near term.

The first point was “commission an independent and thorough Title IX review of the McCarrick allegations.” Title IX is the 1972 follow-up to the 1964 Civil Rights Act that states simply: “No person in the United States shall, on the basis of sex, be excluded from participation in, be denied the benefits of, or be subjected to discrimination under any education program or activity receiving federal financial assistance.”

Other points of the program included improving the structural relationship between Seton Hall, Immaculate Conception Seminary and the Archdiocese of Newark — both of which are affiliated yet separate corporate entities — “to enhance oversight, control and compliance to prevent recurrence,” and to “underscore the importance of Immaculate Conception Seminary and St. Andrew’s Seminary to Seton Hall’s Catholic identity and better integrate the seminaries within the university.”

Seton Hall said it would also hire a chief compliance and ethics officer to ensure university-wide adherence to Title IX laws, policies and practices; require mandatory annual Title IX training for everyone at Seton Hall; and conduct prompt reviews of any allegation of sexual harassment with “assurances of non-retaliation.”

The university added it would share the review’s findings to the school community “to the extent permissible under Title IX laws and university policy.”
McCarrick was laicised – removed from the priestly state – last February following a Vatican trial into charges of abuse levied against him.