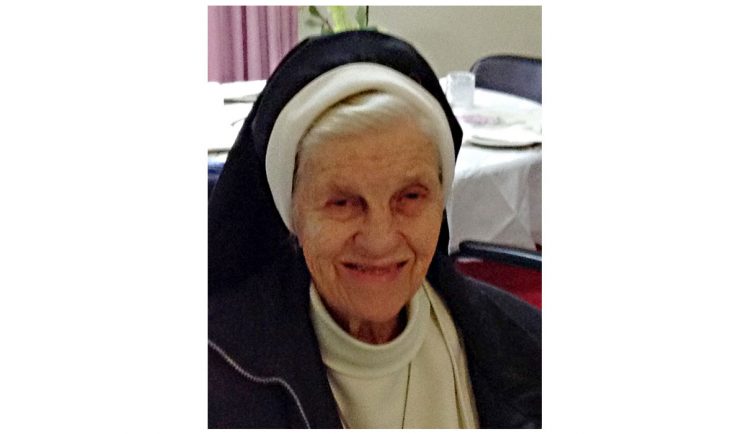 Dominican Sister Mannes Fourie died on July 30 at the age of 91.

Born a twin on March 3, 1928, to Emma and Stephan Fourie, she was named Dorethea Wilhelmina. Emma died when Dorethea was three years old and Stephan took responsibility for the upbringing of the twins and their elder brothers, with the help of a governess whom he later married.

Dorethea was schooled at Sunnyside School in Pretoria and then at Volkskool in Heidelberg. Having completed her commercial junior certificate in 1945, she spent two years at Johannesburg Business College.

During their working years — seven years as typists at the Child Welfare Office in Johannesburg — the twins lived at Mazenod (now Koinonia), the Dominican hostel in Judith’s Paarl.

Having been brought up in the Dutch Reformed Church they were suspicious of the “nuns” but were surprised by the nuns’ kindness and warm welcome, and soon joined the Sisters for prayers and Mass.

They became Catholics while at Mazenod, much to the fury of their father and their Dutch Reformed minister. As time passed, their father realised how happy they were, and eventually became a Catholic himself.

Both later joined the convent, were professed on July 14, 1955, at Oakford, KwaZulu-Natal, and made their final professions on July 16, 1958. Dorethea was given the name Sr Mannes; her twin became Sr Dominic Mary.

They were first assigned to teach at St Mary’s at Oakford, but then sent for training in nursing at Glen Gray Mission Hospital in Queenstown. They also spent time training in midwifery at St Augustine’s in Durban and at the Queen Victoria in Johannesburg.

They were assigned to Marymount where they nursed and worked in the office, then to Marifont Maternity Hospital in Pretoria, and finally to Oakford Infirmary.

For people who could not tell the twins apart, especially hospital staff and doctors, there were many confused encounters. One would speak to Sr Mannes in the ward and then immediately meet “her” in another ward downstairs!

For those who lived with them, it became easy to distinguish who was who: Sr Dominic Mary was timid and gentle, while Sr Mannes was louder, and always seemed to protect her sister.

They were sometimes transferred to different communities and this was very difficult for them as they missed each other greatly — in those days contact was not as easy as it is today.

The twin nuns were very happy looking after their patients and spent much time caring for Eileen, the sister of Archbishop Denis Hurley, who was paralysed.

They also had a heart for the poor and would save a portion of their allowances to share with  beggars on the street.

Many thought that Sr Mannes would not live long after her sister died, but she lived a long, healthy life, serving God in her Sisters and sharing God’s love with the residents of Villa Assumpta.

She picked out those who were lonely and visited them regularly while she was mobile.

Sr Mannes had a short period of illness after a fall and could no longer walk. She longed to join her sister whom she knew was preparing a place for her with the Lord. There surely was great rejoicing in heaven on July 30 when Sr Mannes found herself in God’s embrace surrounded by the many people she loved and served.