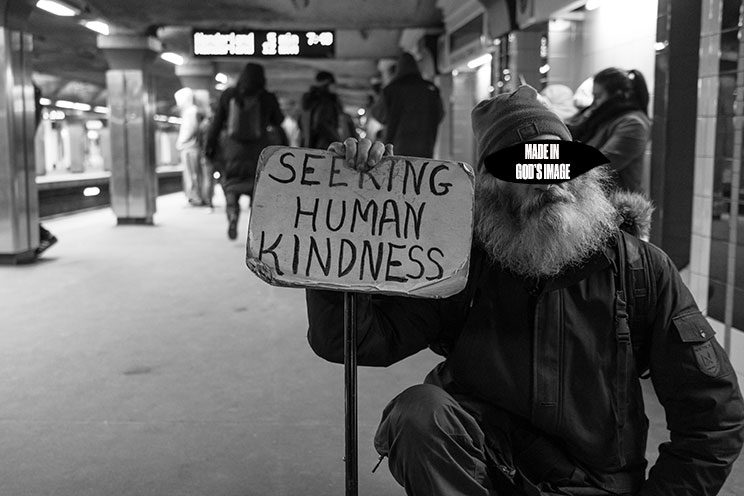 On a Facebook group where citizens of Cape Town are able to dialogue on living in the city, someone posted a picture of rubbish lying in the street after rubbish collection day, calling for action as homeless people are leaving the suburbs littered in filth.

One comment, by a man named Patrick, really stood out for me: “We need to pepper spray and beat up these homeless people. We shot them with paintball guns in the previous area I stayed in.”

Patrick continued: “They have no business scratching in our bins, they are destroying our suburbs. Maybe the SANDF should deal with them as they are dealing with the gangsters and drug addicts.”

I was shocked. How could someone want to inflict hurt on someone else? Someone looking for something to eat or something of value which they could recycle and so earn a living for their families!

I do understand Patrick’s frustration. I often find my rubbish lying in the street because the homeless people didn’t care to put it back after scratching in my black wheelie bin. But to propose violence on someone who has lost everything, living it rough? I don’t think that is the unconditional love Jesus is talking about when he says: “Love one another as I have loved you.”

It seems to me that we remain divided among ourselves, 25 years after the dawn of democracy. Racism has stuck its head into society again, and it has surfaced within the Church as well.

Divided Into the Have’s and Have Not’s

This is an issue which we, as the newly-elected PPC of our parish, need to tackle as the first project of our term.

But we also remain divided as Church communities between “haves and have nots”.

Often when we think about “the poor”, “the lonely”, “the homeless”, we think of people “out there”. But often they are the people right here.

Often we hear it preached from the pulpits that we should get to know the people within our Church community, that we shouldn’t just be liturgical Catholics, but Catholics who take the time out to get to know one another as well.

Get to know the highs, the lows, the suffering, the pain, the happiness and joy of one another. Not just shake the hand of our sisters and brothers at the sign of peace, but honestly, genuinely and lovingly empathise with one another fully.

To move on, we need to dialogue with one another. We need to speak and understand one another,  holistically.

I Can’t Ignore My Hunger

We need to walk with him and minister, not to the least amongst us, but to Him who lives within them.

The Eucharistic prayers, after the consecration, gives thanks “that you have held us worthy to be in your presence and minister to you”.

Recently I met a homeless man named Tyrone at one of the traffic intersections in the Cape Town CBD.

Tyrone had grabbed my attention by what he had written on his piece of cardboard: “I can’t ignore my hunger the way people are ignoring me.”

I found it so profound, so honest and so very true. How often do we roll up our windows, not answer when our doors are knocked on and selfishly keep what we have been blessed with in the cupboards for moths to feast on?

It reminds me of a few years ago when I travelled to Addis Ababa in Ethiopia. On one particular day I was walking towards the big Ethiopian Orthodox cathedral.

Thank you For Acknowledging that I am a Human

As I stood on the pavement, I looked like a lost tourist. Then a homeless man asked if he could help me with directions. I accepted and we walked together to the cathedral.

During our conversation he thanked me for acknowledging the human within him. He then told me that his father had never been present in his life, and that his mother had died a month before we had met. He and his sister had then decided to leave their village and go to the city to look for work, but they couldn’t find anything and ended up living on the streets for the previous three weeks.

He told me that during that time, as he lived on the streets and ate other peoples scraps, people didn’t take notice of him. They looked right through him. People lifted their noses at the stench he gave off and he would often be chased away like a dog.

Finally, he found out that I was a Catholic and he wanted to “pack his bags” and leave the Ethiopian Orthodox faith and become a Catholic then and there—because of the compassion I had showed him. I encouraged him to remain faithful to the Ethiopian Orthodox Church and to continue to seek the face of God there and to serve him and his people there.

He was happy as an Ethiopian Orthodox faithful, but wanted to follow me because of the love I had showed him. But it shouldn’t be about me, it should be about following Jesus, loving him and serving him through his people.

We need to break down Church teaching sometimes and allow Jesus’ words in the Gospels to reign in our lives. He calls us to follow him, to give up our wealth, to love one another unconditionally, sacrificially, as he did. And by doing this, he says, “people will know you are my disciples”.

We need to love them, and bring them to know love and serve God in the compassion we shine into their lives by allowing Christ to live in us and us in him.

For past articles by Keenan Williams, go to www.scross.co.za/category/perspectives/keenan-williams/