Indigenous Priest : Celibacy Is A Gift, Not An Obstacle 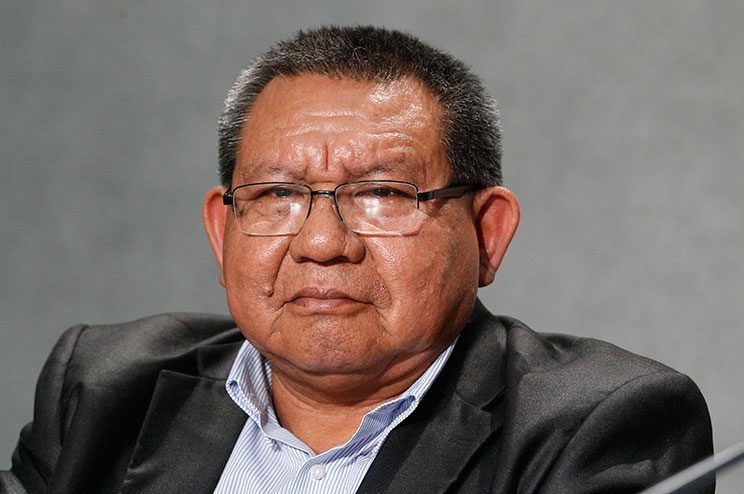 Father Justino Sarmento Rezende, an expert in indigenous spirituality from Brazil, attends a news conference to discuss the Synod of Bishops for the Amazon at the Vatican. (CNS photo/Paul Haring)

By Junno Arocho Esteves – While indigenous cultures may have difficulty accepting the concept of celibacy, indigenous candidates for the priesthood are more than capable of understanding that it is a gift from God, said an indigenous priest from Brazil.

“Celibacy is not something that is born in a human person; it is something that is established some time during one’s life,” Salesian Father Justino Sarmento Rezende told journalists  during a press briefing on the Synod of Bishops for the Amazon.

“People from any culture that exists in the world can live celibate lives from the moment that he or she freely – not forcibly – says, ‘I want to live that lifestyle,'” he said.

Father Rezende was responding to a question regarding comments made in the synod’s first week by retired Bishop Erwin Krautler of Xingu, Brazil, who said that when it comes to ordaining married “viri probati,” or men of proven virtue, “there is no other option.”

“The indigenous people don’t understand celibacy; they say that very openly and I see it,” Bishop Krautler said Oct. 8. “When I go to an indigenous village, the first thing they ask is, ‘Where is your wife?’ And I tell them, ‘I don’t have one.’ Then they look at me with pity.”

Father Rezende told journalists that in his own vocational calling, he faced pushback from his mother and members of his indigenous community, the Tuyuca people in Brazil’s Amazonian region.

“‘To become a priest is not something for us Tuyuca,'” the Brazilian priest recalled one Tuyucan member telling him.

“Where did this idea come from? It was because at the time for us, especially me, the only ones who were able to become priests were white or black people,” he said.

He also said that indigenous priests often face questions or doubts about their ability to respect their vow of celibacy.

Some say that “‘indigenous people have many difficulties of living celibate lives.’ Yes, I do, because I am a normal person,” and celibacy is a challenge for all people, Father Rezende said.

“If one day I thought that living a celibate life wasn’t for me, I would leave it,” he said, adding that if he was suffering because of it and no longer a witness of life for his community or church, then “it wouldn’t make sense for me to continue.”

“That is why I say that celibacy is a virtue and it can be lived by any human being,” Father Rezende said.