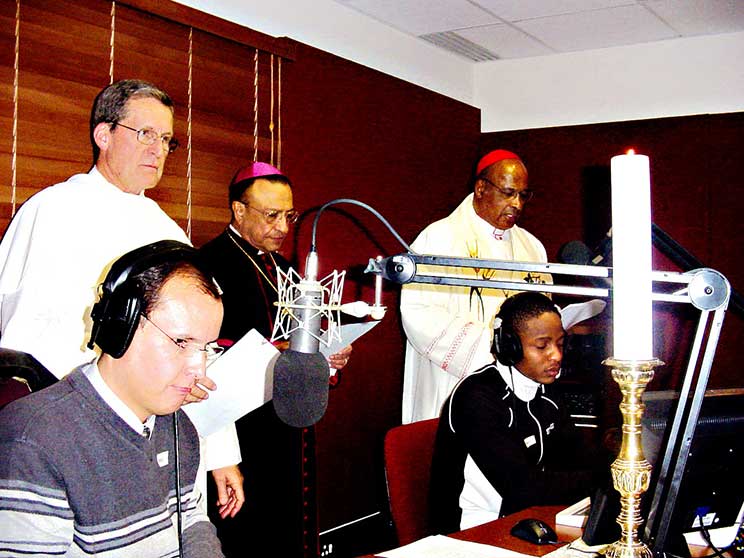 Left: Cardinal Wilfrid Napier (right), Archbishop Blasco Collaço, and Fr Emil Blaser OP, celebrate Mass live on air to bless the new studios in Edenvale in 2006. In front are Karoly Kramli and Thomas Manamela. Right: The building which houses Radio Veritas and the Knights of Da Gama, in 2012.

As Radio Veritas prepares to mark its 20th anniversary with a Mass and celebration on October 26, Fr Emil Blaser OP looks back at the broadcaster’s years of struggles and joys

Over the last 50 years tremendous strides have been made in many areas of life.

I remember being glued to the radio for the first-ever moon landing in July 1969. It was quite incredible.

Since then there has been an explosion of scientific advances never dreamt of before. The simple calculator is one such instance.

But even more astounding has been the advancement in the area of telecommunications.

I can recall using a wind-up telephone and calling the operator who would answer: “Number please”. Young people today would have no idea what I am talking about.

In 1895 the Italian electrical engineer Guglielmo Marconi invented radio. In 1931 Marconi himself set up Vatican Radio.

Ever since then, the Church has encouraged the use of modern communication, and throughout the world Catholic radio came into being.

Many inspiring documents have emerged from the Vatican, with lots of encouragement from popes and especially from the documents of Vatican II.

Unfortunately, the Catholic Church in South Africa had little or no presence on the airwaves until 1999 when Radio Veritas came into being.  This came after a long struggle, and one can recall the great contribution made by people like the late Fr Bonaventure Hinwood OFM, who himself was a regular on national radio.

The Southern African Catholic Bishops’ Conference (SACBC) established the Radio Veritas Trust in 1998 when the bishops asked me to investigate setting up a Catholic radio station.

This was my life’s dream and I immediately started consulting people and putting together initial structures which were presented to the bishops.

In 1998, Radio Veritas applied to the Independent Communications Authority of South Africa (ICASA) for an FM community radio licence.  It marked the beginning of a long and often frustrating road to get Radio Veritas permanently on air.

In 1999 the SACBC decided to hand the project over to the Dominican Order, which felt only a production house would be feasible at that stage. Office space and a studio were hired while applying to funding agencies for assistance.

Our studio: My bedroom

After six months the operation was moved to the Dominican property in Troyeville. My old bedroom became our first radio studio.

Programmes were produced and sent to Christian community radio stations around the country and were also made available to Catholics through bookshops and parishes.

We encountered reservations from non-Catholic radio stations in broadcasting material that came from a Catholic production house. Not wanting to compromise the purity of our Catholic faith and voice, we decided not to supply these stations with programmes.

Early in 2000 we started broadcasting for two hours each evening on a medium-wave frequency, Radio Cidade, a Portuguese community station on a frequency based in Swaziland. Unfortunately, towards the end of that year the owner sold the station and we no longer had access to the frequency.

In 2001 we started broadcasting very successfully three to four times a year on 92.7 FM in Johannesburg, on one-month special events licences. These were very popular with Catholics and we broadcast our final one over the Easter period in 2006, after which 92.7 FM was awarded to Radio 702. This left no FM frequencies available for special events licences.

In the meantime, while waiting for a reply to our application from ICASA, we decided to go the shortwave route, and on May 1, 2002, we took to the air as Radio Veritas on shortwave. We also started broadcasting on the SABC Vivid satellite service.

Both of these broadcasts ended in 2004, because the reception on shortwave was not good due to acute sunflares and we realised the subscriber base to Vivid did not warrant the expense.

We didn’t give up, however, and in a big breakthrough we started broadcasting on DStv’s audio bouquet, 24 hours a day.

In May 2005 we began live streaming Radio Veritas on our website. A month later we received NPO status in June 2005.

In 2005 a generous donor had given us R700000 to buy our own premises. It so happened that at the time the Knights of Da Gama were also looking for premises, and so together we obtained a loan and bought the building in Edenvale, which we are still broadcasting from.

This is a tremendous asset. We have also equipped the building with an appropriate generator.

We celebrated the opening of our new studios live on air on July 11, 2006, with Cardinal Wilfrid Napier and the apostolic nuncio participating in the candle-lighting ceremony and the blessing of the building.

A renewed exploration of alternative opportunities to broadcast regionally and nationally began.

Together with our media lawyer, Justine Limpitlaw, and in collaboration with Radio Pulpit and Sentech, we lobbied vigorously with ICASA for the 540 and old 702 frequencies on medium wave to be declared open rather than commercial, as no commercial stations wanted them. 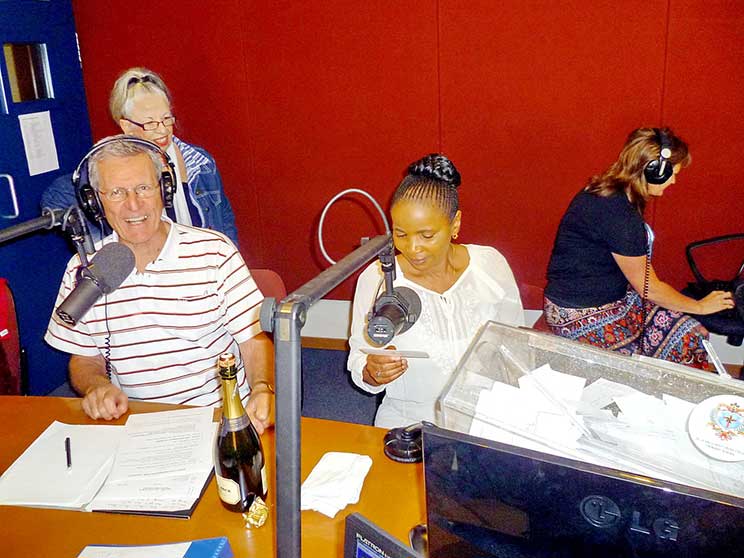 Daphne Matloa draws the raffle winner of a pilgrimage to the canonisation of Popes John Paul II and John XXIII as Fr Emil Blaser is on air and producer and deputy station director Olinda Orlando looks on and competition organiser Lydia Orsmond works in the background. Over the years Radio Veritas has staged many pilgrimages, often in association with The Southern Cross. In September 2020, Bishop Duncan Tsoke will lead a Radio Veritas pilgrimage to the Holy Land.

On air at last!

Finally, after years of meetings, hearings, applications and more applications, and campaigns in collaboration with The Southern Cross and others, our dream finally come true: we received the letter from ICASA granting us the medium-wave licence on the frequency 576.

Now we could move into top gear. We needed a transmitter, so I contacted the Italian bishops’ conference for support. They gave us €250000! Without this generous donation we could not have started Radio Veritas on medium wave.

Vaughan Taylor, one of our trustees, was instrumental in investigating and acquiring the transmitter.

During this time I was greatly assisted by Pat Rogers (whom we sadly lost last year) and deputy director Olinda Orlando, and staff members such as Khanya Litabe, Genni Rogers, Sheila Pires and Mike Carroll, not forgetting Stephen Paradza who now holds a senior position at the SABC.

Over the years several staff migrated to radio stations such as the SABC, Radio 702 and Kaya fm. Perhaps if we’d had greater financial resources this would not have happened.

We opened our broadcasts on Radio Veritas 576 AM officially and with great joy with a Mass on Easter Sunday, April 8, 2012.

Throughout the 20 years of the station’s existence, we’ve been very anxious to secure sustainability. Almost every Sunday I would go to a different parish to inform people about Radio Veritas and to ask them to make a pledge. There are now about 2000 donors who support Radio Veritas monthly.

The cost of running the radio station amounts to R500 000 per month and much of this is covered by our monthly donors.

But we still need to find the balance of approximately R200 000 per month.

Throughout these past 20 years we have literally lived from hand to mouth, and on many occasions we were close to the rocks and had to make special appeals to some of our donors. We are very grateful to them.

Apart from these contributions we have made annual fundraising efforts and have not received any funds from overseas.

Each year the bishops’ Lenten Appeal donates approximately R500 000. We are very grateful for this annual injection of funds, but it is a drop in the ocean of our annual budget. We need much greater resources if we are to produce the excellent and professional programming we aspire to.

The economic climate is a great challenge to us. Every month there are a few donors who drop out. People continue to be good to us but we do not have a sufficient number of donors to cover all our costs. This is not unique to us, but it is a big concern.

We wish to thank all those who have contributed to the success of Radio Veritas over the past 20 years. You are too many to mention individually, but you know who you are.

We also thank all our loyal listeners and donors—without you we would not exist. May God bless you all for your commitment and generosity.

With the goodwill of our fellow Catholics throughout the country we hope to continue for many more years and thank God especially  for these 20 fruitful and inspiring years of broadcasting “The Good News for a Change!”