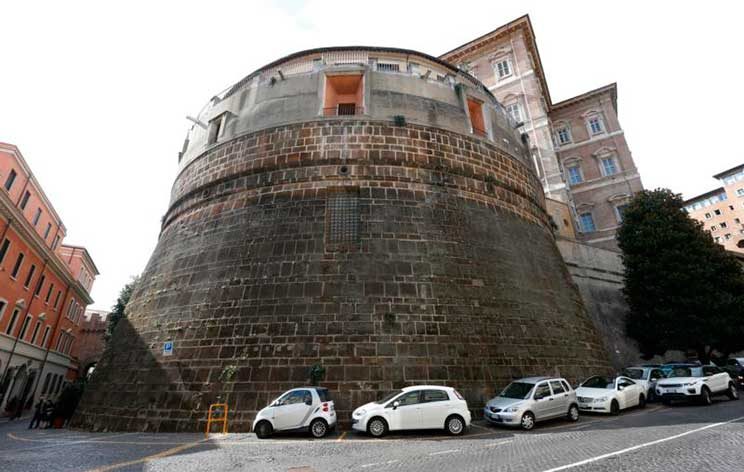 The tower of the Institute for Works of Religion, often referred to as the Vatican bank. The Vatican said complaints from the Vatican bank and the Office of the Auditor General led Vatican prosecutors to authorise a raid on the offices of the general affairs section of the Vatican’s Secretariat of State as well as the Financial Information Authority. The statement said the raid was to collect “documents and electronic devices” as part of an investigation into financial transactions. (CNS photo/Paul Haring)

Giuseppe Pignatone, 70, was named to be president of the tribunal of Vatican City State, which handles civil and criminal matters connected with the 108-acre city state and its employees. The growing number of financial reforms as well as new and beefed-up regulations, including sexual abuse, have expanded the number and kind of cases the court handles.

Pignatone retired this past spring as chief prosecutor in Rome; he had led different investigations into political corruption and organized crime. He had also been a prosecutor in Palermo, Sicily, and Reggio Calabria, where he dealt with key anti-Mafia investigations.

Pignatone replaces Giuseppe Dalla Torre, who served as president of the Vatican court since 1997.

The Vatican made the announcement just two days after five Vatican employees were suspended after raids on Vatican offices.

Vatican police conducted a raid on offices in the Secretariat of State and its financial oversight office following complaints of financial mismanagement, the Vatican press office said.

The following day, Italian magazine L’Espresso published an alleged internal notice from the Vatican informing of the “cautionary suspension” of five individuals.

The press office issued no statement on L’Espresso’s report nor any clarification regarding the nature of the financial transactions or people being investigated.

In a statement the Vatican said the operation, which was authorised by Vatican chief prosecutor Gian Piero Milano and his deputy, Alessandro Diddi, led to the confiscation “of documents and electronic devices.”

The raid, the statement said, “is related to complaints presented at the beginning of the summer by the Institute for the Works of Religion (Vatican bank) and the Office of the Auditor General, concerning financial transactions carried out over time.”

The suspension order published by L’Espresso features photos of one woman and four men, including Msgr. Mauro Carlino, head of information and documentation at the Vatican Secretariat of State, and Tomasso Di Ruzza, director of the Financial Intelligence Authority.

While the alleged order bars them from entering Vatican City State except to access health services or “if authorised by the Vatican magistrate,” it also states that Msgr. Carlino will continue to reside at the Domus Sanctae Marthae, the Vatican residence where Pope Francis and members of the Roman Curia live.

In August, Pope Francis approved new statutes for the Vatican bank, including structural changes and a mandatory external audit.

Among the primary changes to the statutes is the inclusion of an external auditor which, according to the document, can be either an individual or a company proposed by the institute’s supervisory board and appointed by the Commission of Cardinals overseeing the bank’s work.

The external auditor, the statutes state, will “express opinions on the institute’s financial statements in a special report” and “examine all the books and accounting documents.” The auditor may also “request any information useful for auditing activities.”

Vatican: Catechesis Is About A Relationship, Not Just Information
Share