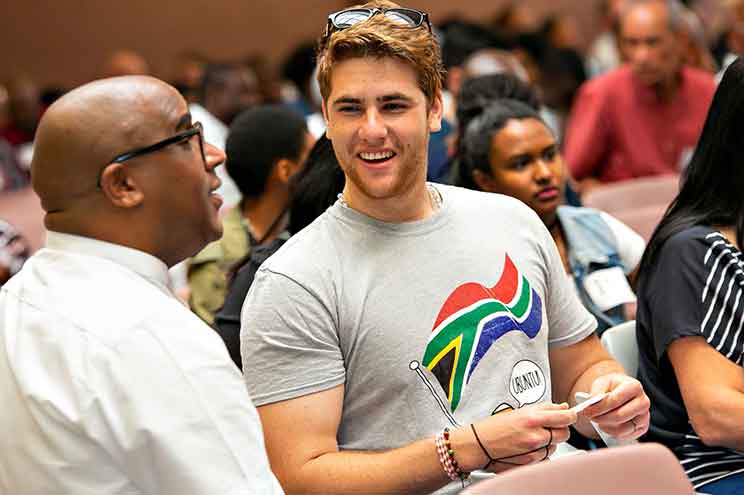 Fr Andrew Knott OMI (left) in conversation with a parishioner at Malvern, during the recent archdiocesan synod in Johannesburg. In his reflection on mission, Archbishop Stephen Brislin of Cape Town writes that the primary agents of evangelisation are the laity, and especially young lay people. (Photo: Sheldon Reddiar)

For the Extraordinary Month of Mission and Mission Sunday, ARCHBISHOP STEPHEN BRISLIN reflects on how the People of God can bring Christ to the world.

Christ entrusted the Church to continue his mission shortly before his Ascension to heaven.

He spoke the words well-known to us: “All authority in heaven and earth has been given to me. Go, therefore, make disciples of all nations; baptise them in the name of the Father and of the Son and of the Holy Spirit, and teach them to observe all the commands I gave you” (Mt 28:18-20).

This is the Divine mission given to the Church: to go, to make disciples, to baptise, and to teach.

Similarly, Jesus said: “You are the salt for the earth….You are light for the world….your light must shine in people’s sight, so that seeing your good works, they may give praise to their Father in heaven” (Mt 5:13, 14, 16).

Every baptised person shares in the mission of the Church (Catechism of the Catholic Church, 1213). Indeed, the mission has its roots in the Old Testament: “And now YHWH has spoken, who formed me in the womb to be his servant, to bring Jacob back to him and to re-unite Israel to him… He said, ‘It is not enough for you to be my servant, to restore the tribes of Jacob and bring back the survivors of Israel; I shall make you a light to the nations so that my salvation may reach the remotest parts of earth’” (Is 49:5-6).

These are the roots of the missio ad gentes, “the first proclamation to people, places and nations not yet transfigured by the Passover of Jesus”.

It is the evangelisation of the Church guided by the Holy Spirit  in its inalienable task of penetrating, converting and transfiguring the world to the ends of the world, so that it may be saved.

The Church proclaims Jesus Christ, crucified and risen, with the unshakeable belief that he is the Saviour of the world, that his love can overcome all barriers and obstacles, that conversion is possible, and that, in fact, the world is hungry and thirsting for his Word, his love, his acceptance, his forgiveness, and his truth.

Mission is not a salespitch

The missio ad gentes is not the sale of some commodity, but bringing others into an encounter with Christ who is risen and alive, who transforms hearts and minds, who forgives and heals, who makes whole and redeems.

Nor is it simply the kerygma (the initial and essential proclamation of Christ as Saviour) but the comprehensive Christianisation of people and society.

The Church has always been concerned about mission and—through the power of Christ and the Holy Spirit—has spread the Gospel “to the ends of the earth”.

What began with the selection of the 12 apostles has now spread to a faith lived by about 2,4 billion Christians, of which about half are Catholic.

Recent popes have called for a renewed evangelisation. The rise in numbers of Catholics, particularly in the 18th and 19th centuries, has meant that the Church has had to ensure pastoral care for greater numbers, and this has led us to become too comfortable and too “inward looking”—we have become a Church of maintenance at the expense of evangelisation. 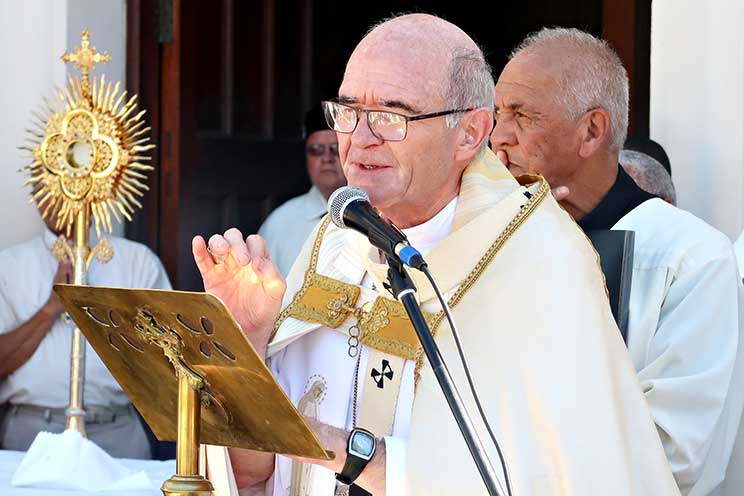 Archbishop Stephen Brislin, the author of this article on our missionary mandate. (Photo: Günther Simmermacher)

Furthermore, society has changed rapidly and radically over the past years. The advances in science and technology, as well as globalisation, have been accompanied by growing secularism, atheism and most especially indifference to the reality of God.

There are extremely ominous signs on the horizon as “the world”, which has made so many advances in the promotion of the dignity of the human person, now seems to be slipping into a frightening period of modern-day slavery (human trafficking), a massive assault on life (abortion, euthanasia), polarisation of people (ideologies, nationalism, populism), the depersonalisation of individuals, increased conflicts and threats of conflict, and the alarming threat to the environment on which all earthly life depends.

Add to this the disillusionment experienced by many people, resulting from a number of different causes, but not least because of the human failure of the Church in recent years and the apparent hypocrisy of a number of Church leaders who have not addressed these failures with Christian honesty.

It is no wonder that there is a deep longing for meaning, hope and redemption.

The Church—always in need of reform—must bring the light of Christ and, indeed, bring Christ to those who are desolate, searching, isolated and “on the margins of society”.

It is an urgent task—we have delayed,  become too comfortable, too parochial and too concerned about matters “within” the Church (as important as they are) that we neglect the cry of the “blind and the lame”.

A Church built by laity

Take, for example, the Church in Southern Africa, which recently celebrated its bicentenary. While we recognise the role played by religious (especially women religious) and priests, the Church would never have been established and grown as it has without the sacrifice, goodwill and commitment of the laity.

Their names and actions may be forgotten, but we live with the fruits of their labours today.

What has been achieved in Southern Africa—as with everywhere else—has been done together. In the modern world it is the laity who must be the primary evangelisers.

Priests and religious are needed, and, again, together we fulfil the mission of the Church. But it is ordinary men and women—especially young people—who must take the lead because they have unique opportunities to “have their answer ready for the people who ask them the reason for the hope that they have” (cf 1 Peter 3:15).

The mission that the faithful are called to is not to take the Gospel to foreign lands (although some might), and it is not confined to the proclamation to those who have not heard of Christ.

It includes the strengthening of those who are fervent in their faith, but more especially it is urgently needed for those who have abandoned a Christian way of life.

And so it is to bring Christ himself, and the “mentality” of Christ, into all sectors of human life (rather than to bring the “mentality of the world” into the Church).

Successive popes have named some of those sectors—the prevailing culture, civil and political life, the economic sector as well as the scientific and technological sector.

Perhaps most pressing is social media, considering the viciousness, the lies, the bullying, the destructiveness and negativity that can occur.

Social media clearly reaches “the ends of the earth” and it is incumbent upon us not only to use social media wisely and responsibly, but indeed to Christianise it and to share on it “the reason for the hope which we have”.

The mission of the Church is never an individual affair. It is a mission given to the Church and not merely to individuals. Strengthened by the Body and Blood of Christ, and recognising the Eucharist as the source and summit of all Christian life, we do not preach ourselves but Christ.

Being part of the mission of the Church, means to be always faithful to the Gospel, to the teaching of the Church and to be in communion with the Holy Father.

We are not “tossed one way and another, and carried hither and thither by every new gust of teaching, at the mercy of the tricks people play and their unscrupulousness in deliberate deception”(Eph 4:14). It is to “proclaim the message, welcome or unwelcome” (2 Tim 4:2).

While many are hungry to receive the message of hope and encouragement, there will be those who will reject it, whether it is because of personal reasons, inability to accept the social teachings, or those of sexual morality, or because it is considered archaic.

We are missionary not through “preachiness”, condemnation of people or ecclesial elitism. We primarily proclaim Christ through our own fidelity in leading a life of discipleship, of always striving to deepen our desire and commitment to follow Christ and to live an authentic Christian life, with no contradiction between what we profess and what we do.

We endeavour always to show the same openness that Christ had to people and not to despise them because of their sinfulness. We try to live according to the “constitution” of the Gospel: the Beatitudes.

How we give witness

We give witness by our willingness to volunteer to make ourselves available to give time for Christ.

Young people especially can contribute by volunteering perhaps for a year or two to make themselves available to the Church.

We do this through our charity, our willingness to be involved and to participate in the corporal and spiritual works of the Church, to reach out to those who suffer and to make a contribution in bringing relief to those who are victims of the degradation and depersonalisation they may endure.

Most importantly, we give witness to Christ through our families and the promotion of family life.

So many of society’s ills can be traced back to the pain and brokenness of family life. It is an urgent aspect of mission to strengthen and promote the good of family.

This is a time for boldness, a time for us to bravely bring the person of Jesus Christ to people. It is not a time to shrink back.

The boldness we need is beautifully captured in a prayer of blessing that may be given at the end of a Confirmation Mass:

what you have brought about in us,

and preserve in the hearts

the gifts of the Holy Spirit:

May they never be ashamed

to confess Christ crucified before the world and by devoted charity

may they ever fulfil his commands.