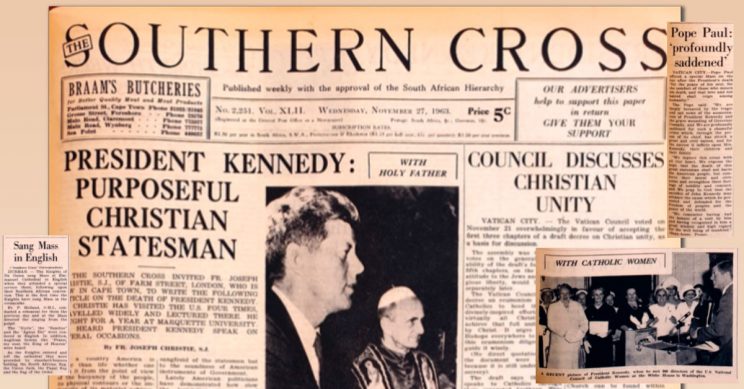 Pope Paul VI has expressed his profound sadness at the assassination of US president John F Kennedy. “We deplore this event with all our heart,” the pope said at a special Mass the day after the president’s killing in Dallas. “We remember having had the honour of a visit by him and having recognised in him a great wisdom and higher regard for the wellbeing of mankind.” Requiem Masses were said in dioceses throughout Southern Africa. In Durban, the Knights of da Gama sang the Requiem in English — the first time the Knights had sung a Mass in the vernacular.

The Second Vatican Council has voted final approval of its first completed schema, that on liturgy, with a historic reform of Catholic worship allowing the wide use of modern languages in the Mass and sacraments.

How Kennedy will be remembered

Southern Cross editor Fr Louis Stubbs writes in his editorial that President Kennedy’s death was not in vain but will have strengthened support for his ideals. “An unpopular regime may end with the death of a dictator, but in a democracy, the death of the popular leader may win even wider support for his ideals,” Fr Stubbs writes. “We think history will link his name with that of another murdered president, Lincoln.”