Getting Close To The Sacred Heart 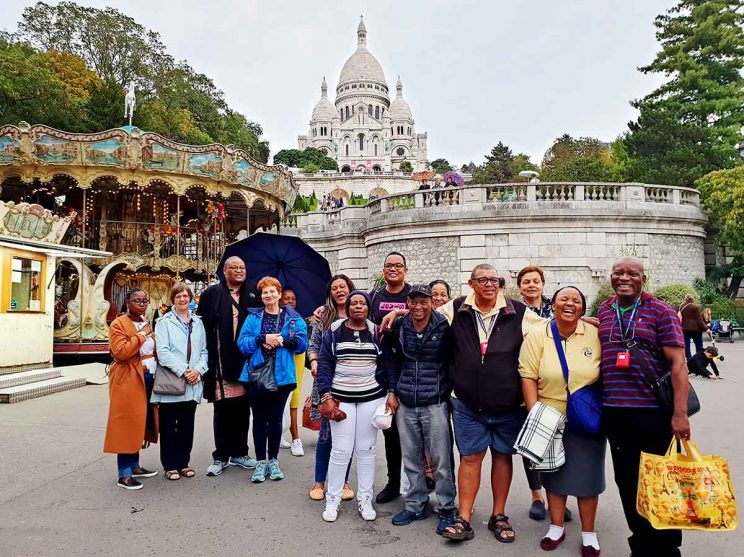 Southern Cross pilgrims in Paris with the Sacré-Cœur basilica in the background.  (All photos: Günther Simmermacher)

In October a group of Southern Cross pilgrims travelled through Catholic France, and visited the great places of the devotion to the Sacred Heart of Jesus, writes Günther Simmermacher.

From a village in France’s Burgundy region, the devotion to the Sacred Heart of Jesus spread into the whole world.

In the chapel of the Visitation Sisters in Paray-le-Monial — today a small town of 9600 — young Sr Margaret-Mary Alacoque experienced apparitions of Christ between 1673-75, giving rise to the modern devotion to the Sacred Heart.

Sr Margaret-Mary didn’t originate anything new. The devotion to the Sacred Heart of Jesus was already established in her times.

The idea of the heart of the risen Lord Jesus Christ, pierced on the cross, representing his passionate and infinite love for mankind, goes back at the latest to St Bernard of Clairvaux in the 12th century and St Bonaventure in the 13th.

In 1353 Pope Innocent VI instituted a Mass for the Sacred Heart. Over the centuries it was championed by different orders, and it was a widespread devotion by the 17th century.

But the messages of St Margaret-Mary’s apparitions defined the devotion in a new way, in large part due to the propagation of it by the Jesuits.

From left: Fr Lawrence Mduduzi Ndlovu preaches at Mass in the chapel of the Apparitions in Paray-le-Monial • The 12th-century basilica of Paray-le-Monial, seen from the group’s hotel

By 1693, the Holy See approved the devotions based on St Margaret-Mary’s account of her visions.

In the 18th century many European cities were consecrated to the Sacred Heart (including Marseilles, which our group had visited a couple of days earlier), often in response to some calamity involving public health.

The solemnity of the Sacred Heart is celebrated on the Friday 19 days after Pentecost (next year on June 19).

Mass at the tomb

Our group had Mass in the chapel of the apparitions, where the Lord appeared to St Margaret-Mary and which holds her tomb, directly opposite our delightfully old-school hotel.

The Catholic faith seems alive in Paray-le-Monial. On a Saturday evening, Mass in the Jesuit church of St Claude de la Colombière, which holds the tomb of St Margaret-Mary’s spiritual director and mentor, was packed.

The town is dominated by the huge 12th-century basilica, an imposing structure modelled on the historic cathedral of Cluny.

Next to the basilica is a large convent; to the back the lovely Park of the Chaplains with an open chapel. Of course, the park is dedicated to the Sacred Heart.

Generally, the devotion to the Sacred Heart of Jesus is a defining characteristic of French Catholicism. And it finds its most prominent expression in the grand basilica on Montmartre, the highest point of Paris, which overlooks the city.

The history of Sacré-Cœur basilica is politically sensitive. It was built as a reactionary expression of the authority of the French establishment against the revolt of the Communards.

Construction for the Sacré-Cœur began in 1875, in the aftermath of France’s defeat in the war against the Prussians. It was completed in 1914, and consecrated on October 16, 1919 — after another devastating war.

Today, it is the second-most visited monument in Paris, with the faithful mingling with selfie-obsessed tourists. Some of these tourists have no idea what they are visiting. One of our group overheard a young American speculating that the imposing edifice might possibly be a church.

That it very much is, of course. Inside, the Blessed Sacrament has been exposed non-stop since 1875.  So utmost reverence is asked for, which guards are ready to enforce with alert admonishments.

We had Mass in the basilica one day before the centenary of the consecration. Although our group was relatively small, our singing resounded through the structure, attracting a small audience.

The Sacré-Cœur was not yet completed when St Thérèse of Lisieux came there with her father and sister in 1887 and devoted herself to the Sacred Heart of Jesus.

In this way, the Little Flower is another saintly beneficiary of the visions of St Margaret-Mary Alacoque.

• The Lazarist church in Paris with the tomb of St Vincent de Paul above the sanctuary • The tomb of St Catherine Labouré in the Miraculous Medal chapel in Paris’ rue de Bac.

The congregation — which took in women rejected by other orders and sought to go into the world, rather than separating itself from it — grew rapidly under St Jane, who in turn was guided by St Vincent de Paul.

St Vincent de Paul played a central role in the spread of two hugely popular devotions that spread from France throughout the world: the devotion to the Sacred Heart and to the Immaculate Heart of Mary through the Miraculous Medal.

Aside from advising St Jane Chantal, St Vincent also co-founded an order, with the widow St Louise de Marillac. Like the Visitation Sisters in Burgundy, the Sisters of Charity in Paris were tasked to go out into the street, especially to serve the poor.

Almost 200 years after the Sisters of Charity were founded, 24-year-old novice Sr Catherine Labouré reported three apparitions of Our Lady, following earlier visions of Christ and the heart of St Vincent de Paul.

All that took place between July and December 1830 in the chapel at 140 rue de Bac in central Paris.

In her apparitions, Our Lady instructed Sr Catherine to have medals struck featuring the image in which the Blessed Virgin appears inside an oval frame, standing upon a globe, with her hands coming out as rays of light — and the invocation: “O Mary, conceived without sin, pray for us who have recourse to thee.”

On the reverse is an image of the Sacred of Heart of Jesus; thus the hearts — the infinite love for humanity — of Jesus and Mary are brought together, two sides of the same coin.

After some investigation by the archdiocese into Sr Catherine’s claim, this was done. Shortly after, in February 1832, Paris suffered a cholera epidemic which killed 20000 people.

The Daughters of Charity distributed the medals at that time and many survivors attributed their cure to the protection received through it. And so it became known as the Miraculous Medal.

It remains a much-loved devotion in the Catholic Church worldwide, and rue de Bac is a hugely popular place of pilgrimage, also among young people.

Our pilgrimage had its concluding Mass in the chapel, whose sanctuary is flanked by the glass tombs of St Catherine Labouré and the foundress, St Louise de Marillac.

After Mass, and before the obligatory tour of Paris’ great sights, we visited the tomb of St Vincent de Paul, just around the corner from rue de Bac.

A staircase leads to the tomb of the saint, high above the altar. His bones are encased in a wax figure of the saint, inside a silver and glass vault made in 1830.

It was fitting to end our pilgrimage to Catholic France at the tomb of the most universal of French saints, thanks to the charitable organisation named after him in the 19th century which is active in parishes around the world.