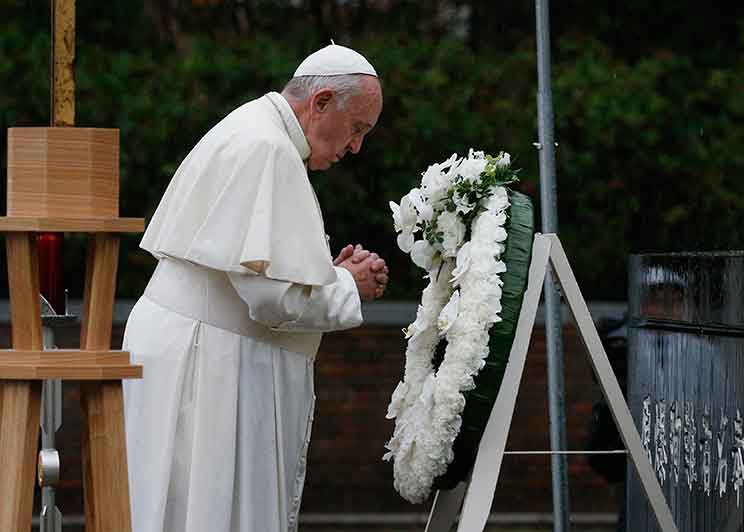 By Cindy Wooden – Saying it is “perverse” to think the threat of nuclear weapons makes the world safer, Pope Francis urged a renewed commitment to disarmament and to the international treaties designed to limit or eliminate nuclear weapons.

Pope Francis began his first full day in Japan Nov. 24 with a sombre visit in the pouring rain to Nagasaki’s Atomic Bomb Hypocentre Park, a memorial to the tens of thousands who died when the United States dropped a bomb on the city in 1945. Later in the day, he was to visit a similar site in Hiroshima.

After laying a wreath of flowers at a memorial to the 27,000 people killed instantly in Nagasaki and the tens of thousands who died over the next five months from burns and radiation sickness, the pope prayed silently. Then he lighted a peace candle.

The park is near the ruins of the city’s Catholic cathedral, which was the largest church in east Asia until the atom bomb destroyed it. The ruins, including a damaged wooden statue of Mary, are reminders, the pope said, of “the unspeakable horror suffered in the flesh by the victims of the bombing and their families.”

Thinking that developing, stockpiling and modernising nuclear weapons is a deterrent to war provides only a “false sense of security,” the pope said. What is more, it feeds fear and mistrust, which hinder dialogue.

“Convinced as I am that a world without nuclear weapons is possible and necessary,” the pope said, “I ask political leaders not to forget that these weapons cannot protect us from current threats to national and international security.”

Pope Francis warned of the risk that the international arms control framework is being dismantled. The Vatican has expressed increasing concern about U.S. President Donald Trump’s continuing delay in beginning talks with Russia on extending or renewing the Strategic Arms Reduction Treaty and for allowing the U.S.-Russian treaty on intermediate-range weapons to expire.

“A world of peace, free from nuclear weapons, is the aspiration of millions of men and women everywhere,” the pope said in Nagasaki.

The use of nuclear weapons is not the only threat the arms pose, he said, pointing to the billions of dollars spent each year on maintaining nuclear stockpiles and developing new weapons when millions of people are starving and dying in poverty.

“No one can be indifferent to the pain of millions of men and women whose sufferings trouble our consciences today,” he said. “No one can turn a deaf ear to the plea of our brothers and sisters in need. No one can turn a blind eye to the ruin caused by a culture incapable of dialogue.”

While acknowledging that many of the people who joined him at the hypocentre were not Catholics, he still asked them to join him in echoing the prayer of St. Francis and asking God “to teach us to be effective instruments of peace and to make every effort not to repeat the mistakes of the past.”

A famous photo stood on an easel next to the small covered platform where the pope spoke. The picture, taken by U.S. Marine photographer Joseph Roger O’Donnell, shows a small boy carrying on his back his dead little brother, taking him to the crematorium in Nagasaki.

In late 2017 and early 2018, Pope Francis had prayer cards printed with the image on it and distributed widely, including in Japan. On the back of the card, the pope wrote, “The fruit of war.”