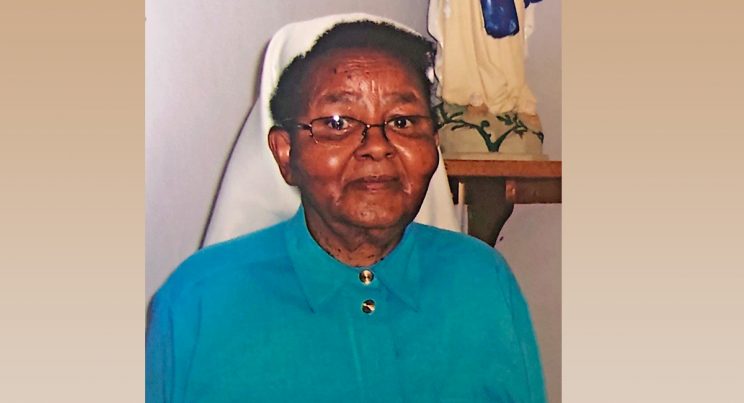 Born on August 14, 1929, and named Elizabeth, she was the second-last of the eight children of Pearce and Wilhelmina Giwu at Elugangeni in Mount Frere, Eastern Cape.

She was educated at Elugangeni and later at Mariazell in Matatiele, where she obtained her primary teacher’s certificate in 1948, and converted to Catholicism.

Sr Regina started her teaching career at Bedford, Eastern Cape. In 1955 she entered the Dominican Congregation of King William’s Town and made her first vows in 1957.

From 1957 she taught at St Theresa’s in Izeli, King William’s Town. There she got to know Fr Donal Cashman and they became lifelong friends.

Sr Regina also taught at Sacred Heart Convent in New Brighton, Port Elizabeth, and at Maria Hilf in Woodlands, King William’s Town, where she was principal till 1991.

Her passions were reading, education and travelling. She studied part-time to improve her qualifications, while continuing to teach. She completed her bachelor of arts degree in 1983.

Sr Regina took a keen interest in the education of her family, especially her nephews and nieces.

Fr Cashman was instrumental in her change in 1991 from teaching to catechism, taking responsibility for training the catechists of four parishes in Mdantsane and of Peter Claver, Duncan Village.

She also managed the finances of these parishes.

Sr Regina accompanied Fr Cashman, who died in 2011, on his home leave to Ireland on several occasions and became a family friend.

Soon after her return from Ireland in 2010, she suffered a stroke, but recovered sufficiently to go to her family for Christmas 2012. It was then that she had a second stroke and was admitted to her congregation’s frail care at Emmaus.

During her retirement she translated the catechism from English into Xhosa.

After Sr Regina suffered a third stroke, she was unable to speak and had difficulty in swallowing. Her suffering was long and silent until she was called home on September 19.

Her funeral was attended by priests, Sisters, family members and many parishioners.