Fr Stan Muyebe OP: Amazon Synod And Extractivism – The Lessons For The Church In Africa 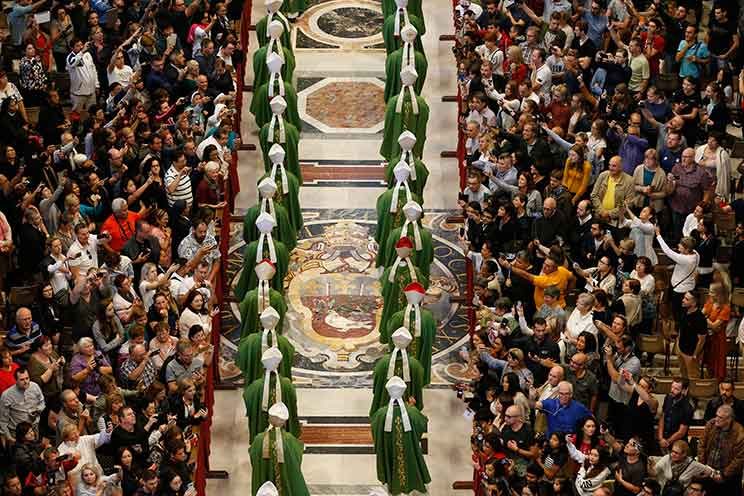 Bishops walk in procession as they arrive for the concluding Mass of the Synod of Bishops for the Amazon celebrated by Pope Francis at the Vatican. (CNS photo/Paul Haring)

The bulk of the assessment of Amazon synod has rightly focused on its doctrinal pronouncements.  This should however not blind us to its contribution to Catholic social thought.  One of the lessons that Africa’s social mission can derive from the Amazon synod is its pastoral response to extractivism as a model of development. Extractivism is one of the most pressing moral issues of our time.

During the closing Mass of the synod, Pope Francis referred to extractivism as “a predatory model of development.”Extractivism is a short-sighted model of development through which countries build their direct foreign investment and economic growth at the back of large scale extraction and exportation of natural resources with little regard for the respect of human rights and the care of the environment.

There is a lot that the Church in Africa can learn from the way the Amazon synod has responded to extractivism.

Prophetically Denouncing The Darker Side Of Extractivism

A number of countries both in South America and Africa have adopted progressive extractivism as a model of development.  Extractivism creates enormous economic benefits for a few elite in the short term (Final Document, 72, hereafter referred to as FD).  It however produces human rights crisis and environmental crisis which is borne disproportionately by the communities and countries in resource-rich areas.  Resource-rich countries fail to benefit optimally from extractivism because of illicit financial flows and unfair trade agreements.  This darker side of extractivism constituted one of the pastoral realities that the synod sought to respond.  The Synod denounces this darker side as “predatory extractivism which responds only to the logic of greed (FD 67).

The synod’s final document catalogues a list of adverse effects of extractive economy, with a particular reference to the destruction of Amazon forest. (FD, 10-13). Some of the issues cited in the Synod document are an echo of the concerns raised by United Nations and human rights organisations, especially land dispossession and killings of anti-mining activists (FD 45-50, 69).

The synod recognised the darker side of extractivism as opening up new opportunities for the Church “to present Christ with all His power to liberate and humanize.” (FD 15).

Openly Declaring That The Church Has Taken A Side

The synod decided that the Church should not remain neutral in the face of the darker side of extractivism which is adversely experienced by the poor and the wounded earth.  “We may not be able to modify immediately the destructive model of extractivist development, but we do need.to make clear where we stand, and whose side we are on” (FD 70).

Taking sides requires that the Church distances itself from the new colonising power in the world so that she can listen to the poor (FD 15).

Taking sides also entails becoming a Church which is as an ally of local communities “who know how to take care of the Amazon, how to live and protect it.”

The Synod has recommended several practical commitments through which the Church would manifest its solidarity with victims of extractivism. This includes divestment campaign against extractive industries (FD 70), campaign for a global fund for settlement of ecological debt to Amazonia communities (FD 83), establishment of a monitoring system against human rights violations in Amazon, and establishment of an Amazon office in the Dicastery for Promoting Integral Human Development (FD 85).

Demanding A Just Transition To Post-Extractivism

Other human rights organisations have called for a total ban in resource extraction in Africa and South America.   The synod was reluctant to make similar pronouncement.   The synod however insisted that extractivism in South America should be substituted by an alternative model of development “in which commercial criteria are not above the human rights criteria and environmental criteria” (FD 73).  The philosophy of life of the indigenous people, called good living, should be considered as a useful asset in the development of such an alternative. (FD,9, 14, 68).

I hope the answer of the Church will equally be yes.  I pray that such a positive reply translates into a prophetic Church which is not afraid to denounce the darker side of extractivism, to challenge those at the demand side of extractivism to adopt ecological conversion, and to demand a binding treaty to hold multinational companies to accountability when they are involved in human rights violations in African countries.

Look Past ‘Confusion’ on Amoris Laetitia

Connected Threads in the Tapestry of Life

Jesus' love for each person is a concrete love, a love that is addressed to each person "with their first...