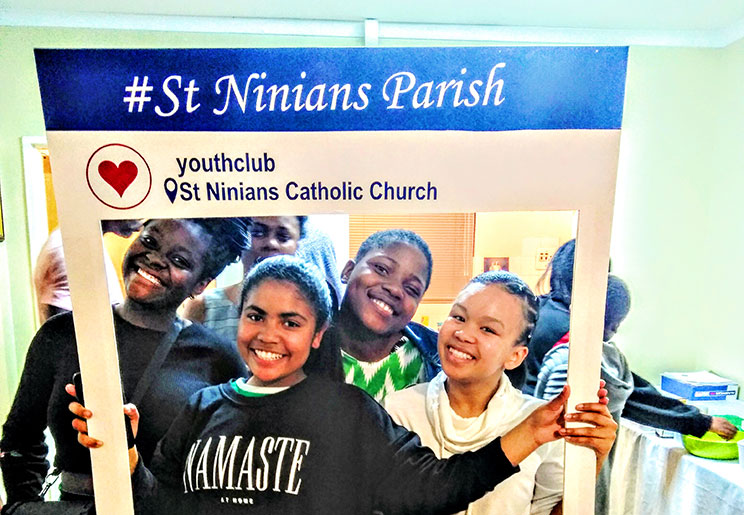 The youth ministry of St Ninian’s parish in Kuils River, Cape Town, got new life when young people were put in charge of it.

For the Extraordinary Mission Month our parish decided to focus much of its attention on evangelisation and getting more “bench-warmers” to become game-changers in a ministry of their choice.

As the coordinator of my parish youth group, I had the daunting job of running, with the youth group, the final Mass for Mission Month. Our task was also to communicate with youth groups from across the archdiocese and to invite them to our youth Mass.

We had a vision to make it the biggest youth Mass our parish and possibly the archdiocese of Cape Town had seen in a long time.

Our only problem was that we had only four active and committed teens eager to meet for fellowship on a bi-weekly basis. So how were we going to pull this off?

As I was discerning on the matter, I stumbled across an article of Pope Francis’ message to the youth at the closing Mass of this year’s World Youth Day. The pontiff said: “You, dear young people, are not the future but the now of God.”

It was the dreaded start of October and we planned on relaunching our youth group.

We had lots of work to do, we needed to change strategy and get everybody on board. We liaised with catechists and confirmation teachers and pushed for as many youths to join us that Friday. We had something exciting to share with them.

As I drove through the parish gates that Friday night, a sense of anxiety entered my very being. It was already 18:20 and I was still alone. Our youth session was to begin in ten minutes.

Some of the regulars began walking in along with facilitators who had been stuck in the Friday peak traffic.

As I stood there in fear, I watched as more and more youth entered the venue. The four regulars were now lost among a crowd of about 15 young people. We started the session ten minutes late after our secretary returned with the digital register on his laptop.

Adding to my stress was the fact that both our parish priest and deacon along with all members of the PPC were there to observe our relaunch. You can imagine my anxiety levels when Father walked in with his “crew”.

Fast forward to the end of the night: it went quite well actually. We counted a total of 32 youth who had attended the session—compared to our four regulars, that was a healthy increase.

The following week came, and the following week ended; a total number of 38 youth had now attended. We were on an upward climb and it seemed like God had sent his angels to help us to the top of the mountain.

So, what had we been doing differently? Well, we applied what Pope Francis was speaking about: we allowed the youth to be the NOW of the Church.

We also gave them points for bringing a friend along with them (which tied into our evangelisation mission).

As we planned our youth Mass and communicated with various role players from different ministries, we quickly realised how anti-youth some people in the Church are. Either anti-youth or stuck in their old ways of doing things.

I know that the youth group would have stagnated at our four or fewer youth members if we had kept doing what we were doing without allowing the Holy Spirit to redirect us.

It gets me to think back to our family trip to Germany in late August. There I attended the local Catholic church for Mass. The two “youth” in the church for Mass were the priest—who seemed to be in his mid-forties—and myself, in my late twenties.

The rest of the congregants were elderly. There was no sign of youth in that parish.

We could argue that this parish might not appeal to the youth. But when are we going to give the youth a chance to do things their way, reverently?

When do we “older youth” and those who have held positions within ministry past our sell-by date decide that now is the time to hang up our boots? Or should we die in our positions, or have our positions taken from us as we kick and scream, “It’s unfair! It’s unfair!”?

We need to quickly realise that Pope Francis’ words resound ever more clearly for us as a Church community.

The youth are not the future of the Church, they are the here and now.

We may feel uncomfortable, we may not like it, but we need to understand that it’s not about us. It’s about the future of the Church, living here and now, creating that intimate personal relationship with God, in a way that appeals to young people.

Fundamentally, it is about the establishment of the kingdom of God.

Maybe it’s time to be radical. If the Spirit wills it, let’s be radical through him, with him and in him.

Support for the Journeys of Loss We Have to Take