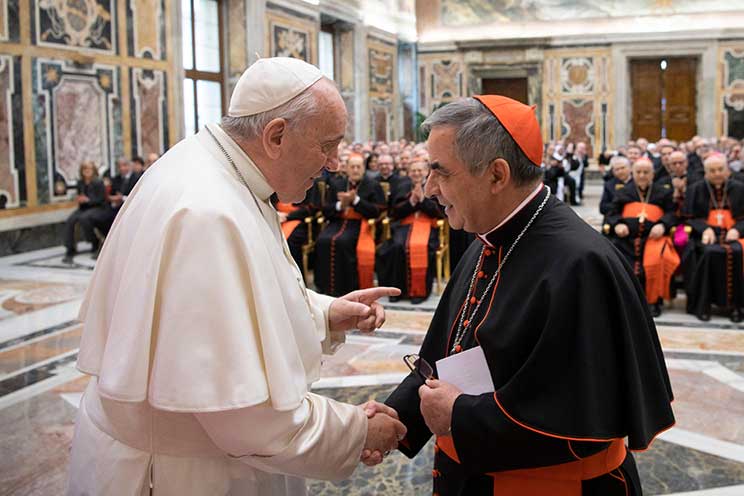 Pope Francis greets Cardinal Angelo Becciu, prefect of the Congregation for Saints’ Causes, during an audience at the Vatican mark the 50th anniversary of the congregation’s existence as an office focused solely on saints and the sainthood process. (CNS photo/Vatican Media)

The saints are “the true light of the church,” so before they are proposed to all Catholics for imitation and veneration, a scrupulous investigation is required, Pope Francis said.

Celebrating the 50th anniversary of having an office, the Congregation for Saints’ Causes, totally dedicated to identifying and promoting models of holiness, Pope Francis met with the congregation’s staff, members and consultants – including physicians, historians and theologians – and with postulators, the people who shepherd and promote the causes of saints.

“The very many beatifications and canonisations that have been celebrated in the past few decades demonstrate how the saints are not unreachable human beings but are close to us and can support us in our life’s journeys,” the pope said.

Cardinal Angelo Becciu, prefect of the congregation, told the pope that in the past 50 years, 2,203 people have been beatified and 1,479 have been canonised. In addition, the congregation handled the processes for the papal declarations of six new “doctors of the church,” namely: Sts. Teresa of Avila, Catherine of Siena, Therese of Lisieux, Hildegard of Bingen, John of Avila and Gregory of Narek.

Before any of those processes, the cardinal said, the congregation “carries out a meticulous and scrupulous work of scrutinizing and verifying their holiness.”

Focusing on the congregation’s work for the universal church, neither Pope Francis nor Cardinal Becciu mentioned the Vatican’s recent decision to put on hold the beatification of U.S. Archbishop Fulton J. Sheen, apparently awaiting clarification about how he handled cases of clerical sexual abuse.

Before declaring that a person lived a holy life and is with God in heaven, the pope said, intense investigation is necessary, a work that must be carried out with “seriousness and expertise in studying the procedural sources and documentation with objectivity and rigour in the examination and at every stage of judgment.”

Such rigour, he said, is the only way for the church to “clear the field of any ambiguity and doubt, obtaining full certainty in the proclamation of sainthood.”

Pope Francis insisted postulators, who do not work for the Vatican but for religious orders, bishops’ conferences or organisations promoting a sainthood candidate, must have “an attitude of serving the truth” and not be motivated by a desire for success or financial gain.

Departing from his prepared text, Pope Francis also spoke about the church’s requirement that, except in the case of a martyr, one miracle attributed to the candidate’s intercession is needed for beatification and another miracle for canonisation.

“A miracle is required, because it’s the finger of God there,” he said. “Without the clear intervention of the Lord, we cannot move forward with a sainthood cause.”

— He recognised the miracle needed for the beatification of Italian Sister Maria Velotti, founder of the Franciscan Sisters, Adorers of the Holy Cross.

— In three separate decrees, he recognised the martyrdom of 25 Dominican friars, a layman belonging to a Dominican third order and a Dominican nun killed during the Spanish Civil War in 1936-37. The 27 can now be beatified.

— In five separate decrees, he recognised that an Italian bishop and four Italian priests lived the Christian virtues in a heroic way.

— He recognised the heroic virtues of Sister Dinah Amorim, a Brazilian member of the Daughters of Mary who was born in 1917 and died in 1988.