Günther Simmermacher: 25 Years in One Place 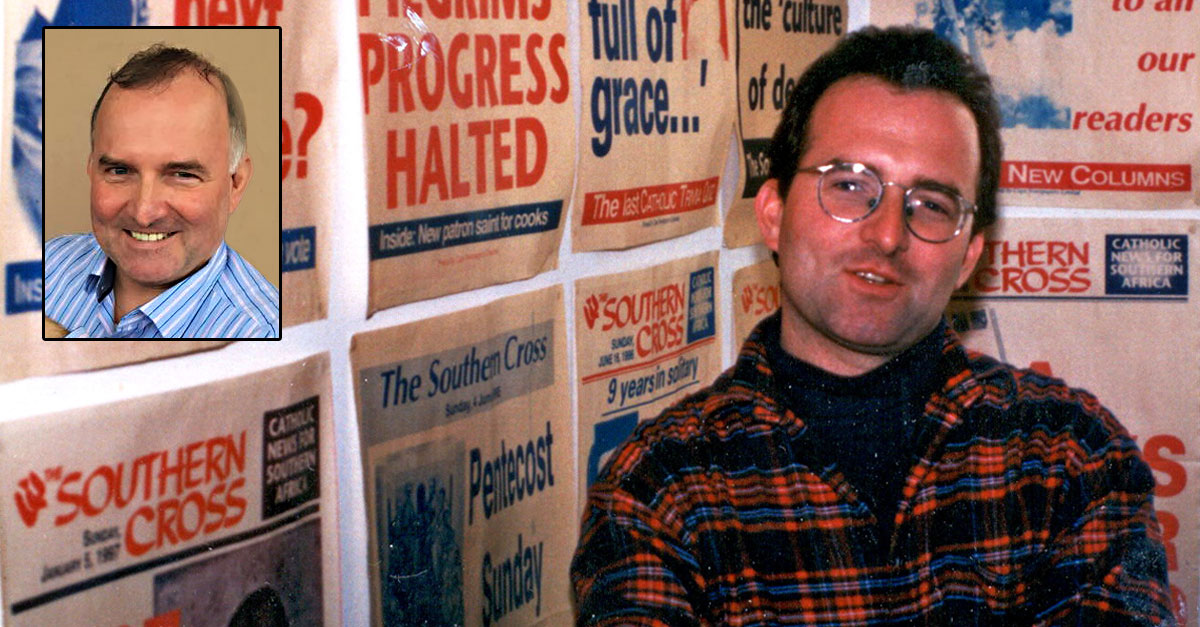 Once upon a time, The Southern Cross didn’t want me. In September 1994, I responded to an advertisement in this newspaper for the vacant position of journalist. I was duly invited for an interview — and didn’t get the job.

Perhaps it wasn’t my wisest move to tell the editor, Fr Bernard Connor OP, that I wanted to jazz up what I called a “staid” newspaper. Apparently honesty isn’t always the best policy.

Soon after my failed application, our son was born. I was still unemployed since the publication I had worked for folded. I remember vividly praying one day that I might find employment.

A few days after that prayer, I received a call from Noel Bruyns, the business manager of The Southern Cross at the time. The young woman who had been employed in my stead hadn’t worked out (she went on to have an accomplished career in journalism), would I still be interested? I was.

And so it happened that 25 years ago, on January 3, 1995, I stepped into the editorial newsroom of The Southern Cross. As the alert reader will have deduced, I’m yet to leave.

Eugene Donnelly, the long-serving managing editor (and father of now Vatican-based Fr Simon), tasked me with laying out the children’s and photo pages.

Fr Connor seemed to have forgiven me for calling his newspaper “staid”, but he soon left and was replaced as editor by Michael Shackleton, an exceptional man of immense erudition, kindness, humour and faith.

Mike turned out to be a great mentor to me, especially in all areas of Catholicism. He recognised in me a journalist of some talent, and was open to my ideas of jazzing up the newspaper.

I’ve been trying to keep it jazzy ever since.

Of course, there were times when I felt ready to move on. Circumstances always intervened: an unexpected pay rise, a promotion to managing editor in 1998, and then my entirely unexpected appointment to serve as the editor of this estimable newspaper.

By the turn of the millennium it seemed obvious that even a Catholic newspaper should be edited by a professional journalist. That was the view taken by Michael Shackleton, who was plotting his retirement, and the board of directors, led by chairman John Robertson and Bernard Pothier, that great champion of the laity.

They decided that this journalist should be me.

It was an unexpected vote of confidence — signed off by the bishops’ conference — and an intimidating challenge. I hope that over the past 19 years (as it will be in February), I have met the confidence invested in me. And I do hope that in the course of my editorship, I have gained in wisdom what I have lost in hair.

Despite all the challenges The Southern Cross has faced, the frustrations these have created and sacrifices they have demanded, I am incalculably grateful for the past 25 years with the newspaper.

There is, of course, the joy of working for the Lord and serving the People of God. Being a Catholic journalist is a vocation.

It’s not one I had sought. When I applied for the job in 1994, I wanted employment; serving God was a welcome bonus. But the Holy Spirit has a hand in such things. The job is still a job, but it’s also a vocation.

And in this grace-filled vocation, I have been blessed in many ways.

Unlike many of my colleagues in the field (or, indeed, my father, who also was a newspaper editor), I have been able to work normal working hours. That meant that I was always present for my family. You can’t put a value on that.

Unlike many of my colleagues, I haven’t had to look out for controversy and bad news to boost circulation.

To be sure, The Southern Cross must forthrightly face controversy and bad news as they occur, and we mustn’t engage in sunshine journalism. I’m a journalist, not a cheerleader.

But the nature of our field encourages so many good news stories. The extent of goodness, kindness, service and sacrifice I witnessed over the past 25 years have given me great hope.

I have got to know so many outstanding people who continue to inspire me. Some are well-known, some are not. How do you fail to be in awe, for example, of a young Benedictine who offers his kidney to a complete stranger about whom he read in The Southern Cross?

I could try and mention all the people I have encountered through The Southern Cross who in some ways have made an impression on me. I will not yield to that temptation, for the very practical reason that invariably I would commit unpardonable omissions.

I shall, however, mention my compadre in the trenches of running this newspaper for more than two decades: business manager Pamela Davids. She is the engineer who keeps this train running.

And I must mention our loyal readers and friends, whose kindness, generosity and support sustain me.

In October The Southern Cross will turn 100 years old. I pray that the newspaper will run for many, many years yet.

Perhaps in the future, somebody will write a history about The Southern Cross, and include a paragraph about the editor who once was this newspaper’s afterthought.