Event of the Decade: The Day a Pope Broke 800-Year Tradition 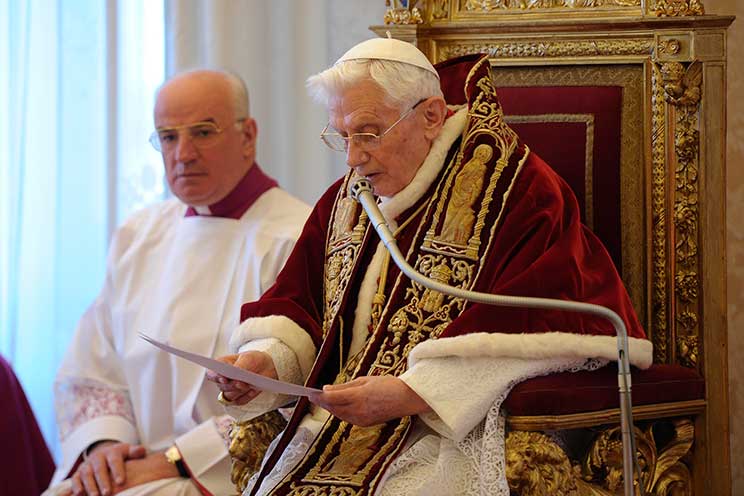 Pope Benedict XVI reads his resignation in Latin during a meeting of cardinals at the Vatican in this Feb. 11, 2013, file photo. (CNS photo/L’Osservatore Romano)

From a Catholic perspective, few if any dates were more significant during the soon-to-close decade than Feb. 11, 2013.
On that day Pope Benedict XVI, citing his age and declining health, broke an 800-year tradition of popes holding onto office until death with the stunning announcement of his retirement. It has our vote as the defining church moment of the past 10 years.

A consistent theme throughout Pope Benedict’s eight-year papacy was the connection between faith and courage. An essential component of faith, he taught, is courage. Christians need courage to uphold truth and defend Catholic values in a secular age, to be heard in the public square and, ultimately, courage to trust in God’s will.
And in Pope Benedict’s case that meant the courage to stand aside and let a man with more vigor assume the crucial work of leading the church in difficult times. The papacy, he said, is not about the person who wears the ring of St. Peter but about the greater mission to make disciples of all nations.

So, if it takes a strong spine to accept the mantle of pope, perhaps it takes an even a stronger one to announce to the world, after much prayerful reflection, you are no longer up to the job.
It’s unlikely, however, that even Pope Benedict foresaw the degree of fortitude required from all Catholics to endure what became a decade so consistently darkened by scandal. Faith and courage, as Pope Benedict taught, are indeed inextricably linked and each faced a stern test over the past 10 years.

The person most immediately affected by Pope Benedict’s bold resignation was Pope Francis.
As Pope Benedict made history by leaving, Pope Francis made it by arriving as the first non-European pope in modern times, the first from the Americas, the first called Pope Francis and the first Jesuit.
Unlike every other pope over the previous century, Pope Francis had never even studied or worked in Rome. A true outsider and reformer, Pope Francis was passed over in the 2005 papal conclave and only got a second chance because Pope Benedict decided the pope could indeed retire.

In personality and style, the gregarious Argentinian arrived as a stark contrast to his German predecessor. But although different in many ways, Pope Francis has mirrored Pope Benedict’s high regard for courage or, as Pope Francis succinctly puts it: “a cowardly Catholic doesn’t make much sense.”

Pope Benedict’s resignation, as he neared his 86th birthday, gave us a new way to regard the papacy. He once said that should a pope become physically, psychologically or spiritually unable to perform his duties, he had a moral duty to retire rather than cling to the title and rewards of office. To step down was a bold decision and, years from now, will form a central component of Pope Benedict’s legacy.
Church history may well record it as the most significant single event of the decade, and maybe the most courageous.

“Event of the decade” which appeared online on the website of the Catholic Register, the Toronto-based national Catholic Canadian newspaper.