Pope: Preaching One Thing, Doing Another Is ‘Pastoral Schizophrenia’ 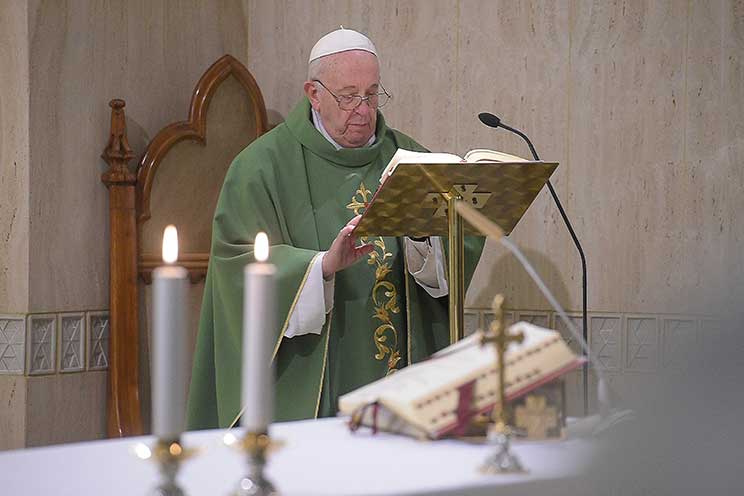 Pope Francis celebrates Mass in the chapel of the Domus Sanctae Marthae at the Vatican. In his homily, the pope said the crowds who followed Jesus knew he taught with “authority” because he lived what he preached. Too many other religious leaders, he said, suffer from “pastoral schizophrenia,” which is saying one thing and doing another. (CNS photo/Vatican Media)

By Cindy Wooden  – The crowds following Jesus during his lifetime said he taught with “authority” because he lived what he preached, Pope Francis said.

“Authority is seen in this: coherence and witness,” the pope said Jan. 14 during his early morning Mass in the chapel of the Domus Sanctae Marthae.

In the day’s Gospel reading, Mark 1:21-28, people in the crowd remark on the authority of Jesus and how “he commands even the unclean spirits and they obey him.”

Jesus’ exercise of authority, the pope said, is authentic because it can be seen. “What is seen? Coherence. Jesus had authority because there was coherence between what he taught and what he did, how he lived,” he said.

The scribes in the Gospel, on the other hand, act in such a way that Jesus tells the people, “Do what they say, but not what they do.”

The scribes suffered from “pastoral schizophrenia” – saying one thing and doing another, the pope said. They were prime examples of what Jesus often called “hypocrites.”

“Hypocrisy is the way of acting of those who have responsibility – in this case pastoral responsibility – but are not coherent,” Pope Francis said. “And the people of God are meek and tolerant; they tolerate so many hypocritical pastors, so many schizophrenic pastors who say but don’t do.”

A hypocritical, inconsistent, schizophrenic pastor can do so much damage, the pope said. But people know. They seek out those who have the same kind of authority Jesus did, the authority that comes from living what they preach.

Authority, the pope said, “does not consist in commanding and making oneself heard, but in being coherent, being a witness and, in that way, being a companion on the path of the way of the Lord.”

70 Years for Sister Veronica of the Cross!