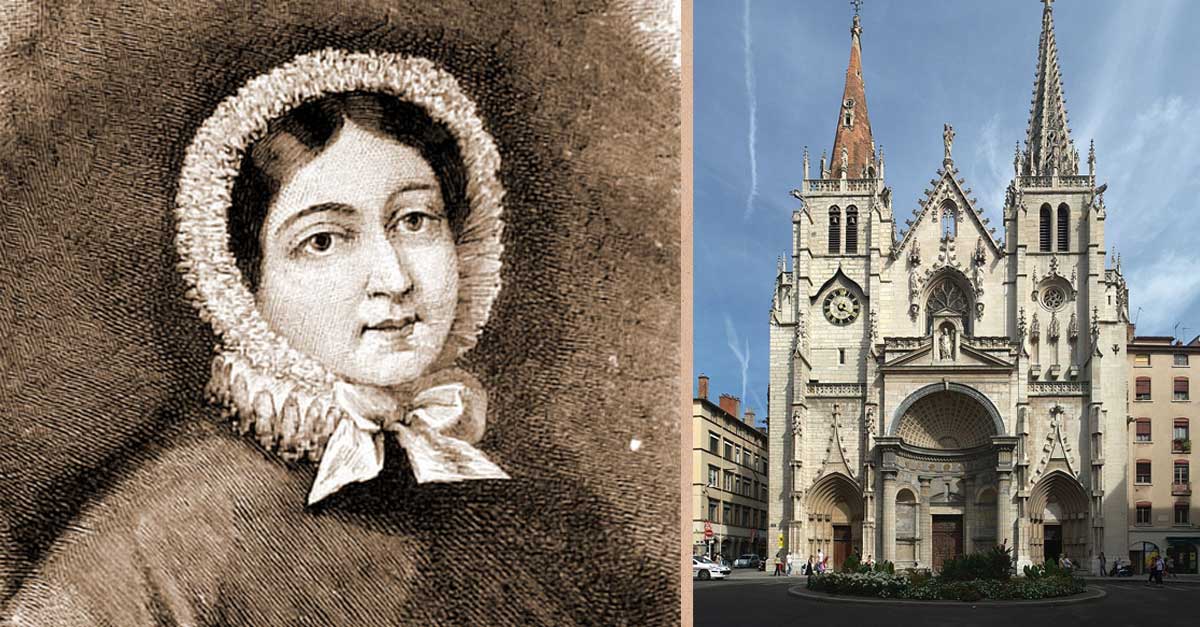 In part 2 of the Pauline Jaricot story, Colleen Constable explains how Pauline was miraculously cured, how she handled betrayal and poverty, and what lessons her life holds for us today.

The founder of the Society of the Propagation of the Faith and the Living Rosary Association told her companions: “I recommend to you among all virtues: child simplicity, spirit simplicity, heart simplicity towards God, towards fellow-creature; simplicity in action, simplicity in humility spirit, such as to appear always inferior to the poor which we must serve.”

The key was humility.

Pauline’s reputation as a pious woman earned her the respect of clergy, including the Holy Father—many sought her advice.

Born into wealth, Pauline might have been a socialite but gave her life to evangelisation.

After 1845 Pauline experienced the hardships of ministry. When she reached out to the Society of the Propagation of the Faith and the Association of the Living Rosary for financial assistance, she encountered rejection and abandonment from both institutions which she had founded and built up.

She was denied recognition and financial assistance at a time when she became, as her lawyers put it, “an innocent victim of fraud”.

In 1845 Pauline undertook a new project: the evangelisation of the working class, an indication of her interest in social reform. She spent two years in spiritual reflection, prayer and seeking advice to ensure that the inspiration was not based on personal interest.

Her project was a model Christian town: she purchased a factory with a building adjacent to accommodate families, and a school and chapel close by. Aligned to this business model was the concept of a “Bank of Heaven”.

The management of the business was assigned to people who turned out to be dishonest. The funds raised for the project were handed to a man who was tasked with finalising the transaction. He stole the money.

A French bishop who served in the United States also embezzled funds, intended for the struggling diocese of New Orleans.

The Bank of Heaven was Pauline’s idea of financing the needs of the working class, to establish a community of workers where men and women would be paid a living wage, children educated, the sick and aged cared for.

After the theft of donations for the bank, Pauline committed to repay the generous investors and ended up begging in order to raise funds.

Her attempts to absorb the burden of her debts were fruitless. As a last resort she turned to both the Society of the Propagation of the Faith and the Association of the Living Rosary for financial assistance, but without success. Not even the intervention of Pope Pius IX, through a written note asking that they should help her, was heeded.

Instead the Association of the Living Rosary refused to give her recognition as its founder, relieving themselves from any moral obligation to assist her.

Pauline became severely indebted and fell into a state of poverty. She joined the list of the poor in Lyon to receive food.

In all of this her love for God, Our Lady and the missions never ceased.

The thought of dying in debt was Pauline’s greatest cross. In her sorrow she turned to her spiritual director, the saintly Curé of Ars, John Vianney.

He told her: “Through the hands of the Blessed Virgin, the Good God frequently grants one of the greatest gifts in heaven’s treasury—an understanding of the Way of the Cross; love of trials and sufferings.”

He advised her about the Way of the Cross: “My sister, to try to get from under the cross is to be crushed by its weight, but to suffer it lovingly is to suffer no longer.”

Fr Magallon, a family friend of the Jaricots, gave Pauline a relic of Philemona as a gesture of appreciation for the generosity he received from her family. Pauline responded by saying: “Let us pray for Philomena’s canonisation. If we do, I am sure she will bless our work in many ways.”

Philomena, who was said to be a Greek princess, was martyred at 13 in Rome in 304 AD. Her remains were found in 1802 in the Roman catacombs of St Priscilla, along with a small glass phial containing remnants of blood.

Pauline had suffered from advanced heart disease since age 36. She decided to travel to Rome to get Pope Gregory XVI’s blessing en route to the shrine in Mugnano to seek a cure through the intercession of Philomena.

The pope did not believe that Pauline could be cured of her serious illness. He told the superior of the Sacred Heart Sisters: “How ill our daughter is! She seems to me as if she had come forth from the grave. We shall never see her again. She will never return.”

Pauline was miraculously healed the next morning, on the August 10 feast of St Philomena, at the shrine of Philomena in Mugnano, while receiving Holy Communion near the relics of the martyr.

When she returned to Rome, Pope Gregory was amazed to see her in perfect health.

He asked her to remain in Rome for a year to investigate the validity of the healing. He granted her request to build a chapel in honour of Philomena, and named Philomena patroness of the Living Rosary.

In January 1837, as a direct result of Pauline’s cure, the pope authorised liturgical celebration of St Philomena.

Pauline lived a healthy life after her miraculous healing and her heart condition returned only in 1861, a year before her death.

During this period, she experienced loneliness and feelings of abandonment. She described herself as “a poor woman who has only God for friend, only God for support…but God only is enough”.

Pauline died in on January 9, 1862 at her home, Lorette House, having lived in poverty brought on by financial misfortune caused by others.

In her last days she surrendered herself to Mary. Her last words were: “Mary, O my Mother, I am thine.”

In the 21st century we should celebrate Pauline Jaricot’s missionary achievements with an open mind to understand the challenges she faced in the 19th century.

She had to overcome resistance from within the system. In 1826, when Pauline’s missionary work flourished, some men from the Propagation of the Faith tried to suppress the Living Rosary out of fear that its success would decrease their financial collections.

Through dialogue and interaction, Pauline eventually won their wholehearted support.

When her creative fundraising strategy produced the first fruits for the Society of the Propagation of the Faith, it triggered resistance at parish level. She was accused by the parish priest of beginning “non-authorised work” in Lyon, and this attitude against her was also adopted by other parishes.

Pauline, being a savvy, innovative and assertive 19-year-old missionary at the time, ensured that common sense prevailed. Instead of disbanding her organisation, as demanded, she expanded it.

It was love of God and loyalty to her mission that enabled her to stand firm, eventually giving the Church great works of charity. She said: “I lit the match that lit the fire.”

The spiritual journey of Pauline Jaricot challenges our concepts of evangelisation, parish ministry, our notions to respond to the call of becoming disciples wherever we are, and the issue of women’s spirituality, in particular the spirituality of laywomen.

Today in the 21st century, many women in the Church still experience much resistance at parish level and sometimes even at diocesan level when responding to the call of mission.

The parish politics of the 19th century is replaced with 21st century resistance, embodied in a parish culture that points towards scepticism, lack of creativity and alienation of those with progressive or innovative ideas.

Today Pauline Jaricot is best understood as a strong woman, a missionary and contemplative who took a different approach to evangelisation.

She was an enlightened businesswoman and property owner; an agent of change and transformation; a social entrepreneur; a fundraising genius; a spiritual writer; a spiritual mother who broke new ground; a philanthropist; a recruitment agent; a woman of great faith; a woman of action; a woman of love and devotion.

She encompasses many roles: her spirituality integrates many different aspects of devotion.

After she was defrauded, Pauline did not succumb to a victim-mentality. She fought back by trying to reclaim lost territory, although without success.

She is a woman whose role in the Church, though recognised in 1962 when she was declared venerable, still remains hidden. She was a “soul of fire”, a true disciple whose actions sprang from contemplation.

Pauline’s concept of practising Christianity is an extraordinary example for our own time. She was smart: an intelligent woman who used her skills, talents and spiritual gifts and her financial security to serve the poor, the Church and the mission of Christ.

In prayer she conceptualised great works of charity and implemented them with prudence.

Her life illustrates that selfless action, love, humility and suffering forms an integral part of the spiritual journey and women’s spirituality.

Venerable Pauline Jaricot is a saint for the modern world.