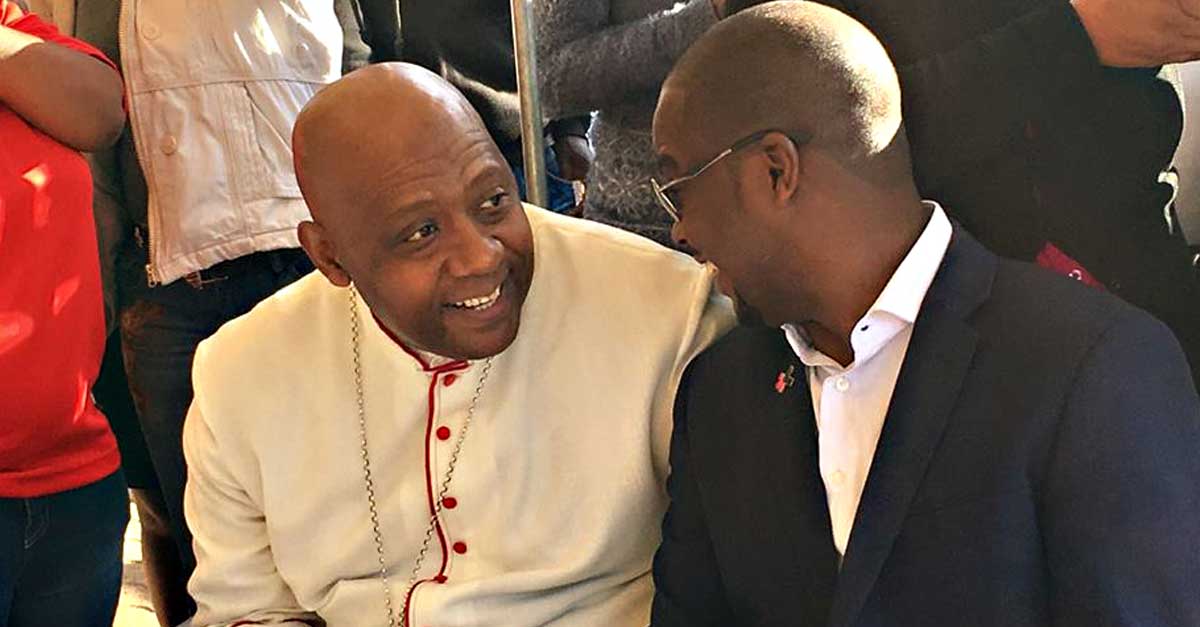 Bishop Victor Phalana of Klerksdorp chats at a 2017 event organised by Justice & Peace which brought out 600 people, including local tavern owners, to condemn violence against women.

The Justice & Peace ministry has become inactive in many dioceses. In the face of many social crises, now is the time to revive it, argues Kalie Senyane.

It is so encouraging to see the Catholic bishops coming forward to support women and girls by saying, “No to Abuse of Women and Children”, and affirming their support for the victims of domestic violence and abuse.

Reading their recent pastoral letter, written so beautifully, makes me, as a man, want to do more in my own private space to challenge the mentality of my peers, and to fight for the victims of domestic violence and abuse.

However, I wonder how it is, when our bishops show so much care and support, that in many dioceses Justice & Peace has no voice or even has died.

There are models of functioning J&P structures in Southern Africa, and the J&P Commission of the Southern African Catholic Bishops’ Conference is very active nationally.

The diocese of Klerksdorp runs the Tavern Project to change the patriarchal culture that leads to violence against women and children.

The J&P Commission of the archdiocese of Durban, which I serve, conducts community dialogues with men and boys, women and girls, towards the same goal.

Justice & Peace has been a driving force over the years within the SACBC region; it even used to be recognised even by government agencies.

Once J&P was recognisable everywhere throughout the region. Today, I am not sure whether it has a profile outside the archdioceses of Johannesburg, Durban and Klerksdorp.

Does this mean that in most other dioceses, the J&P ministry is not seen as important anymore?

Can our bishops see a need to rekindle this important ministry of the Church which over the years has done wonders to break barriers, and during apartheid advocated for black people?

Today there is the great challenge of abuse of women and children, and J&P can help to advocate for the victims of abuse, and for a modification of values and behaviour to prevent such abuse.

When the COP 17 conference on climate change was held in Durban in 2011, then-national coordinator Fr Mike Deeb OP brought almost all 29 dioceses to participate in it. Catholic cyclists rode from Musina to Durban, in scorching heat, to advocate for environmental justice.

We need a revival of that broad commitment on diocesan levels.

There are many pressing issues of injustice which we are facing within our societies: poverty, inequality, unemployment, racism, lack of clean water and sanitation, xenophobia, discrimination against migrants and refugees, abuse of women and children…

Isn’t it the function of Justice & Peace work within respective dioceses to challenge these social issues? Isn’t it our job, as advocates of the poor, to address, challenge and act on these social injustices?

How, as the Church, are we going to fight against injustice if we allow the important ministry of Justice & Peace to die out?

Willing and able to help

My dream is to see the bishops in their respective dioceses revive this important ministry of the Church. I, for one, am willing to resuscitate it within the metropolitan region of Durban, which covers all the dioceses of Kwa-Zulu Natal as well as that of Mthatha. If need be, I’ll help to do so diocese by diocese.

There are so many trained J&P advocates who surely would return, if given the platform to do so.

I humbly ask our beloved bishops to sit down and look at this issue as matter of urgency.

Having said that, I must doff my hat to Bishop Victor Phalana for the great work that has been done in his diocese by J&P agents (helped by the SACBC’s J&P).

As the national chair for J&P, he shows that he doesn’t just occupy that position but lets his diocese speak by action.

That is what I would like to see my beloved bishops do in their respective dioceses. Only they can revive this ministry, and then it will become a driving force again in challenging the injustices of this era on the local level.

Speaking personally (as I have throughout this article), and not as J&P coordinator of the archdiocese of Durban, I am sure my fellow J&P comrades will support me in this matter, and that they would avail themselves if bishops asked them to help to re-establish this ministry in their dioceses.

I know comrades from the diocese of Klerksdorp who, like me, are willing to help other dioceses revive their J&P ministry.

A few weeks ago I spoke about these concerns with Archbishop Abel Gabuza, the coadjutor archbishop of Durban and previous chair of the SACBC’s J&P Commission.

He said that it is important to have committed individuals who can take the J&P ministry to new heights. If parish priests and parish pastoral councils display an interest in J&P, that ministry will flourish through their support.

Archbishop Gabuza noted that due to conditions set by overseas funders, especially at national level, things such as conferences cannot be hosted anymore. That means that the impetus must increasingly come on the diocesan level.

He suggested that dioceses should do more to fundraise to revive J&P or keep it functioning.

He emphasised that each diocese need to have two or three most important issues or projects to focus on, and work closely with government entities towards a common goal.

We have the experience, structure and ideas to make Justice & Peace flourish again. Now we need the engagement.

Kalie Senyane is the J&P coordinator of the archdiocese of Durban. This article is written in his personal capacity and reflects his own views.