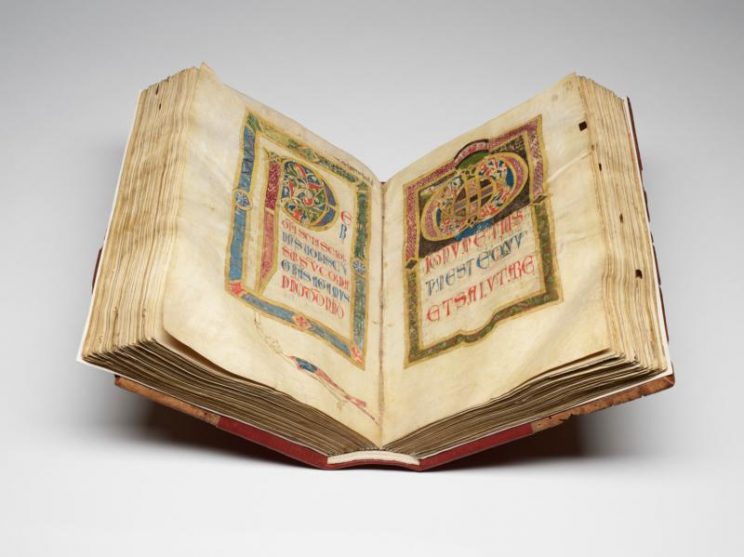 An illumination is shown from the St. Francis Missal, which dates to the 12th century. The missal will be on display at the Walters Art Museum in Baltimore Feb. 1 to May 31. (CNS photo/courtesy Walters Art Museum)

By George P. Matysek – More than eight centuries ago, St. Francis of Assisi and two companions randomly opened a prayer book three times inside their parish church of St. Nicolo in Italy.

Hoping God would send them a message, the wealthy young men prayerfully consulted the manuscript once for each person of the Holy Trinity.

Remarkably, each of the three Gospel passages they landed on contained the exact same command: Give up worldly possessions and follow Christ.

Taking the words to heart, St. Francis established a rule of life governing what would become his Order of Friars Minor. The Franciscans embraced radical poverty to draw closer to Christ while also evangelising others.

The same book that inspired St. Francis in 1208 is expected to inspire thousands of others as the Walters Art Museum in Baltimore places it on public display for the first time in 40 years Feb. 1 through May 31.

The Latin missal, which contains Gospel readings and prayers used at Mass, underwent a painstaking two-year conservation effort aimed at repairing centuries of wear and tear.

The missal, especially beloved by Catholics, isn’t just a historic artifact. Because it was touched by a saint, it is also considered by many to be a religious relic.

“This is our most-requested manuscript,” said Lynley Herbert, curator of rare books and manuscripts at the Walters.

Herbert noted that Franciscans from around the world have visited the Walters over the decades to catch a glimpse of the richly illuminated book. Because of its significance to the Franciscan community, the Walters has let them view it even when the manuscript’s fragile condition kept it from public display.

“We’ve become a site of pilgrimage,” Herbert explained. “I’m contacted probably monthly, if not weekly, with requests to see this book.”

Herbert said the missal was commissioned for the Church of St. Nicolo in Assisi. An inscription inside the manuscript notes that the book’s donor lived in Assisi in the 1180s and 1190s.

“The manuscript was probably made just before 1200,” she told the Catholic Review, the media outlet of the Baltimore Archdiocese. “In the 15th century, it had to be rebound because the binding probably started falling apart after so many centuries of use.”

The St. Francis Missal is believed to have been housed at St. Nicolo until an earthquake damaged the church in the 19th century. The church’s artifacts were then dispersed and the church was torn down. All that remains today is the church’s crypt.

Henry Walters, whose art collection became the basis for the Walters Art Museum, purchased the St. Francis Missal from an art dealer in 1924, according to Herbert.

Abigail Quandt, head of book and paper conservation at the Walters, supervised a meticulous conservation effort undertaken by Cathie Magee, who worked on the project as an Andrew W. Mellon Fellow in Book Conservation.

Quandt said the major challenge was repairing 15th-century wooden beech boards that helped hold the book together. The boards and some of the parchment pages had been attacked long ago by insects and were left with many holes, she said.

Quandt and Magee removed the boards and took the book apart page by page. They filled holes with a special adhesive to strengthen the wood, mended pages and replaced the leather spine with new leather. The entire manuscript was stabilised and stitched back together.

In working on the project, the conservators discovered that unlike what might be expected in such an elaborate manuscript, gold leaf was not used in the St. Francis Missal. The scribes who illuminated the parchment pages instead used silver leaf that was glazed with a type of varnish that made it look like gold.

Using ultraviolet and infrared lights, the Walters’ team also noticed some mistakes scribes had made in producing the prayer book — missing a word, sentence or even whole paragraphs as they copied sacred texts.

“Typically, the scribe would just take their pen knife and very, very carefully scratch the surface (of the parchment) in order to remove the incorrect letter or word,” Quandt said. “And then they would write over it.”

As conservators worked on preserving the manuscript, each page was digitized so anyone with internet access around the world can view and study the book. It will be available through the Walters’ Ex-Libris webpage, https://manuscripts.thewalters.org, by searching on “The St. Francis Missal.”

The exhibition also will feature several other objects, including paintings, ivories and ceramics of different time periods, highlighting “different aspects of the ripple effect of this manuscript across time and how it impacts different people,” Herbert said.

In addition to items related to St. Francis’ contribution to the Franciscan movement, there will be objects connected with St. Clare, the first woman to follow St. Francis, and St. Anthony of Padua, who was focused on preaching and spreading the Franciscan message, Herbert said.

“There’s also a case that will focus on private devotion and secular Franciscans,” she said.

Herbert noted that the missal itself has three full pages of colourful illuminations, including an elaborate depiction of the Crucifixion that shows Christ on the cross with two angels overhead. Mary and St. John the Beloved stand by his side.

“When the manuscript has been shown in the past, it has always been open to one of the illuminations — which are really actually quite lovely,” Herbert said. “But we thought about it long and hard and we decided that it would be more meaningful for people coming to see it for this exhibition if we showed the openings that St. Francis actually may have interacted with.”

The Importance of Family Prayer