Pope: People Need ‘Prophets’ To Warn Them Of Their Sins 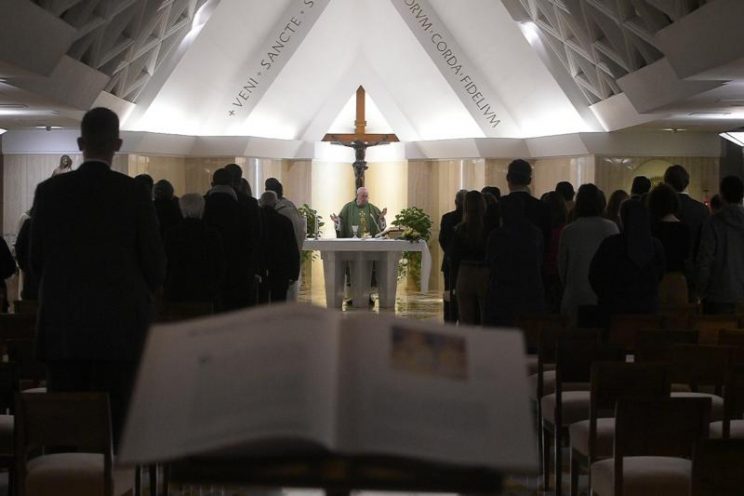 Pope Francis celebrates Mass in the chapel of his residence, the Domus Sanctae Marthae, at the Vatican. In his homily, the pope said the Gospel makes clear that God will judge people the same way they judge others. (CNS photo/Vatican Media) See POPE-MASS-JUDGMENT Jan. 30, 2020.

By Carol Glatz – If a saint like King David could have been capable of so much sin, what are regular people doing to make sure they can always be attentive and aware of where they are going wrong? Pope Francis asked.

“Am I alert? Do I always need someone who tells me the truth, or not? Do I think I don’t?” he said in his homily at morning Mass in the Domus Sanctae Marthae.

The pope focused his homily on the day’s first reading (2 Samuel 11:1-17) about David’s sin, which included committing adultery and giving orders to arrange for the death of the woman’s husband.

How could David, who had done so many good things and loved God, be capable of this and feel no remorse? the pope asked.

Everyone is vulnerable to spur-of-the-moment sins, like anger, but usually that is followed by a sense of guilt or regret, he said.

Instead, what happened to David was a slow “slide” into a condition that completely lacked any awareness of sin, he said.

Pope Pius XII warned of such a situation years ago, when he described the evil of the modern era as being the loss of the sense of sin and the assumption that people can do anything.

Many people today are like David, Pope Francis said.

They seem like good people, “go to Mass every Sunday, call themselves Christian,” but they are oblivious to their own sins or behave as if those sins were normal. One example, he said, is pretending it is normal to not pay maids or workers their due.

Many times, it takes something in life to deliver a hard “slap” to make the person stop and get off that long slippery slope of sin, he said.

Or, just as God sent Nathan to set David straight, people need a similar “prophet” who makes them see the error of their ways, he added.

“Do I listen to the reproach of a friend, a confessor, a husband, a wife or children, which helps me a little?” he asked.

If a saint like David could fall into such evil, “are we being careful, brothers and sisters, that it won’t happen to us, too?”

He asked people pray that God always would “send us a prophet — it can be a neighbor, a son or daughter, a mother or father — who slaps us a little when we are slipping into this world where it seems everything is licit.”