Pope: Humility, Not Showing Off, is the Christian Way of Life 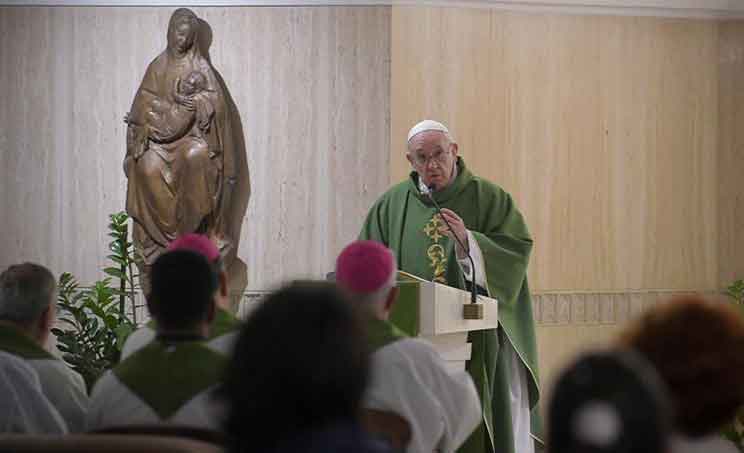 Pope Francis delivers the homily during morning Mass  in the chapel of his residence, the Domus Sanctae Marthae, at the Vatican. Christians are called to follow the same path of humiliation Jesus followed to the cross, and they should not flaunt their piety or position in the church, Pope Francis said. (CNS photo/Vatican Media)

By Junno Arocho Esteves – Christians are called to follow the same path of humiliation Jesus followed to the cross, and they should not flaunt their piety or position in the church, Pope Francis said.

Everyone, including members of the clergy, can be tempted to take the “way of the world” and try to avoid humiliation by climbing up the proverbial ladder of success, the pope said in his homily during morning Mass at the Domus Sanctae Marthae.

“This temptation to climb can also happen to shepherds,” he said. “But if a shepherd does not follow this path of humility, he is not a disciple of Jesus: he is a climber in a cassock. There is no humility without humiliation.”

The pope reflected on the day’s Gospel reading from St. Mark, which recounted the imprisonment and death of St. John the Baptist.

St. John’s mission wasn’t only to announce the coming of the Messiah, but also “to give witness to Jesus Christ and give it with his life,” he said.

“It is to bear witness to the path chosen by God for our salvation: the path of humiliation,” the pope said. Jesus’ “death on the cross, this way of annihilation, of humiliation, is also our way, the way that God shows Christians to go forward.”

Both Jesus and John the Baptist faced temptations of vanity and pride: Christ faced them in the desert while John humbled himself in front of the scribes when asked if he was the Messiah, the pope explained.

Pope Francis said that although they both died “in the most humiliating way,” Jesus and John the Baptist emphasised through their example that the true “path is that of humility.”

“The prophet, the great prophet, the greatest man born of woman — this is how Jesus describes him — and the Son of God have chosen the path of humiliation,” the pope said. “It is the path that they show us and that we Christians must follow.”