Pope Shares His ‘Dreams’ For Amazon Region, Its Catholic Community 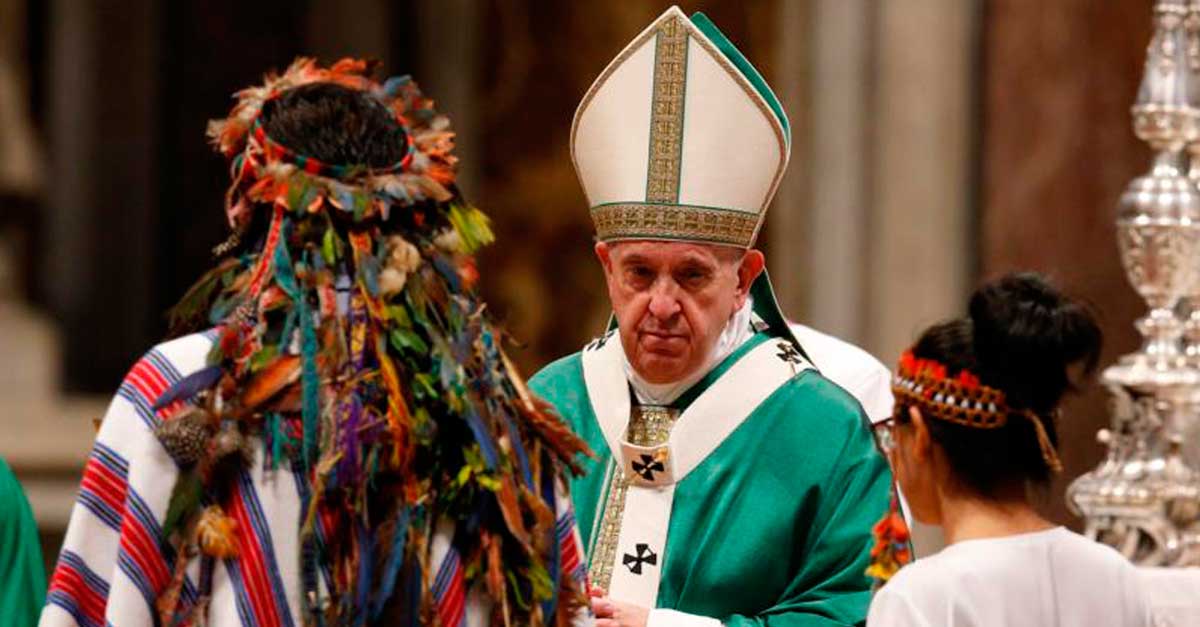 Pope Francis accepts offertory gifts from indigenous people as he celebrates the concluding Mass of the Synod of Bishops for the Amazon at the Vatican. The Vatican released the pope’s apostolic exhortation, “Querida Amazonia” (Beloved Amazonia), which offers his conclusions from the synod. (CNS photo/Paul Haring)

By Cindy Wooden – Pope Francis said he dreams of an Amazon region where the rights of the poor and indigenous are respected, local cultures are preserved, nature is protected, and the Catholic Church is present and active with “Amazonian features.”

In his apostolic exhortation “Querida Amazonia” (Beloved Amazonia), Pope Francis made no mention of the idea of ordaining married men to the priesthood so that far-flung Catholic communities would have regular access to the Eucharist.

Instead, he said “every effort should be made to ensure that the Amazonian people do not lack this food of new life and the sacrament of forgiveness.”

“A specific and courageous response is required of the church” to meet the needs of Catholics, he said, without dictating what that response would be.

However, Pope Francis opened the document saying he wanted “to officially present the final document” of October’s Synod of Bishops for the Amazon. The final document asked for criteria to be drawn up “to ordain as priests suitable and respected men of the community with a legitimately constituted and stable family, who have had a fruitful permanent diaconate and receive an adequate formation for the priesthood, in order to sustain the life of the Christian community through the preaching of the word and the celebration of the sacraments in the most remote areas of the Amazon region.”

Speaking about the final document, Pope Francis wrote that the synod “profited from the participation of many people who know better than myself or the Roman Curia the problems and issues of the Amazon region.”

Having a church with “Amazonian features,” he said, also will require greater efforts to evangelise, official recognition of the role women have and continue to play in the region’s Catholic communities, a respect for popular forms of piety and greater efforts to inculturate the Catholic faith in Amazonian cultures.

In the document, Pope Francis did not mention the theft during the synod of wooden statues of a pregnant woman, usually referred to by the media as “pachamama” or described as a symbol of life and fertility by synod participants.

But he insisted, “Let us not be quick to describe as superstition or paganism certain religious practices that arise spontaneously from the life of peoples.”

The pope devoted several long passages to the theme of “inculturation,” the process by which the faith becomes “incarnate” in a local culture, taking on local characteristics that are in harmony with the faith and giving the local culture values and traits that come from the universal church.

“There is a risk,” he said, “that evangelisers who come to a particular area may think that they must not only communicate the Gospel but also the culture in which they grew up.”

Instead, he said, “what is needed is courageous openness to the novelty of the Spirit, who is always able to create something new with the inexhaustible riches of Jesus Christ.”

One of the characteristics of many Catholic communities in the Amazon, he wrote, is that, in the absence of priests, they are led and sustained by “strong and generous women, who, undoubtedly called and prompted by the Holy Spirit, baptised, catechised, prayed and acted as missionaries.”

While the idea of ordaining women deacons was mentioned at the synod, it was not included in the bishops’ final document.

In his exhortation, Pope Francis said the idea that women’s status and participation in the church could come only with ordination “would lead us to clericalise women, diminish the great value of what they have already accomplished and subtly make their indispensable contribution less effective.”

Instead, he called for including women in roles “that do not entail holy orders,” but that are stably established, publicly recognised and include “a commission from the bishop” and a voice in decision making.

Peppered with poetry praising the region’s beauty or lamenting its destruction, much of the document looks at the exploitation of the Amazon region’s indigenous communities and poor inhabitants and the destruction of its natural resources.

“The Amazon region has been presented as an enormous empty space to be filled, a source of raw materials to be developed (and) a wild expanse to be domesticated,” the pope wrote. “None of this recognises the rights of the original peoples; it simply ignores them as if they did not exist or acts as if the lands on which they live do not belong to them.”

The destruction of the forest, the polluting of the Amazon River and its tributaries and the disruption and contamination of the land by mining industries, he said, further impoverish the region’s poor, increase the chances that they will become victims of trafficking and destroy their communities and cultures, which are based on a close and care-filled relationship with nature.

“The inescapable truth is that, as things stand, this way of treating the Amazon territory spells the end for so much life, for so much beauty, even though people would like to keep thinking that nothing is happening,” Pope Francis wrote.

Yet, he said, “from the original peoples, we can learn to contemplate the Amazon region and not simply analyse it, and thus appreciate this precious mystery that transcends us. We can love it, not simply use it, with the result that love can awaken a deep and sincere interest. Even more, we can feel intimately a part of it and not only defend it.”