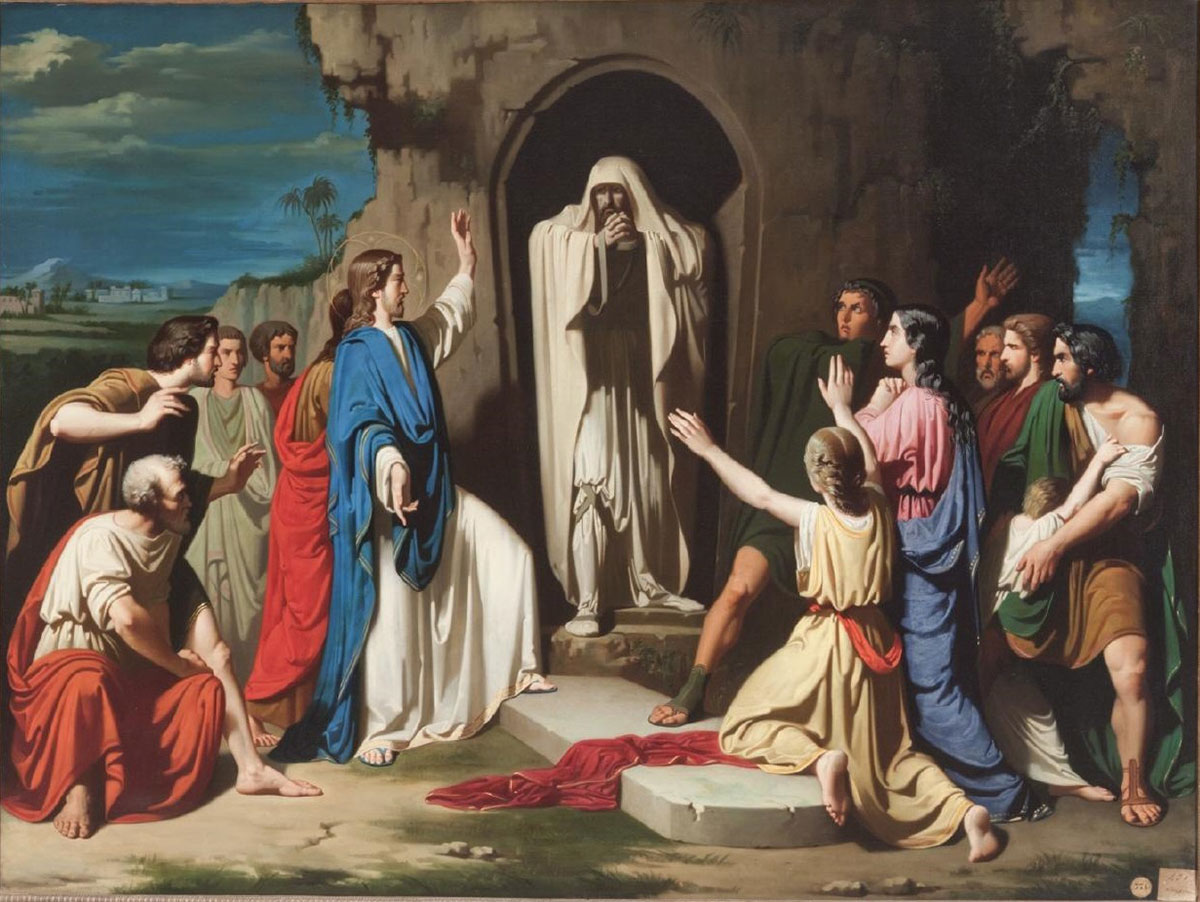 Who am I? To be called by my name, to be known, this is the act of love, an intimate caress that carries us beyond and through death into resurrection. This truly is the beginning of Holy Week that will usher us through the desert and into and beyond the passion of Jesus. The most intimate touch between lover and beloved, the espousal image of anointing and hair loose, flowing over the feet of Jesus. The deep sigh of Jesus moved in the spirit, sighing at the grief of Mary at the death of her brother.

But now with Gerard Manley Hopkins we also cry: Enough! The Resurrection, A heart’s-clarion! Away grief’s gasping, joyless days, dejection. Across my foundering deck shone a beacon, an eternal beam. Flesh fade, and mortal trash fall to the residuary worm; world’s wildfire, leave but ash: In a flash, at a trumpet crash, I am all at once what Christ is since he was what I am, and this Jack, joke, poor potsherd, patch, matchwood, immortal diamond, Is immortal diamond.

This beautifully echoes the words of Thomas Merton: At the centre of our being is a point or nothingness which is untouched by sin and illusion, a point of pure truth which belongs entirely to God, which is never at our disposal, from which God disposes of our lives, which is inaccessible to the fantasies of our own mind or the brutalities of our own will. This little point of nothingness and of absolute poverty is the pure glory of God in us. It is, so to speak, Gods’ name written in us, as our poverty, as our indigence and as our dependence. It is like a pure diamond, blazing with the invisible light of heaven.

“Roll away the stone.

Unbind him, and let him go”.

But what about Lazarus? He had been dead, and now he was alive! Yes, he was alive for now, but he would have to face the death process all over again. What were his thoughts and emotions at being given back his life? So many thousands, the witnesses we have today; coming back to a life completely changed, redirected with all fear evaporated.

In so many ways we also experience the gift of being given back our lives that are every bit as traumatic as the Lazarus effect or any near-death experience. We come out of periods of mourning and grief to a new recognition of the pulsing life and purpose within us. We come out of periods of dread disease and illness; slowly and pensive at first, but with ever-growing confidence and a will towards a new life and a new way to return love for love. We go through spiritual awakening; the rich and complex experience of dissolution of one’s illusion of identity as a separate self. We are called out of periods of desolation and despair. Our lives are given back to us!

Lazarus gropes his way out of the dark tomb with his hands and feet tied up in bandages, and his face all wrapped up; a faceless man without any identity, a man rotting away in the tomb. It is the call of Jesus who gives back to Lazarus his identity just as the father gives identity to Adam and Eve when he stitches them new clothes in the Garden of Eden. How very easy to lose our identity, to fall into our own illusions, our grandstanding and our pretences. The rotting face from the tomb has no illusions. It is the call of Jesus that gives it beauty, gives it life and gives it an identity.

“Unbind him, and let him go”. Lazarus stumbles out of the tomb, but there was no way he could unbind himself just as there is no way for us to free ourselves. He needs the community to do that for him. By unbinding Lazarus and setting him free from the death shroud, the community is accepting Lazarus back as one of them. Each of us is called to walk back from death into the community.

Often we would prefer to remain unconscious of our own future death. There’s a thing about death; it takes us prisoner, into the darkness, and locks us away forever until every trace of our human selves has disappeared. In our gospel today, the curtain of death is pulled back. The painful journey to that day still lies before Jesus but, in a way, he is standing before his own tomb, with us, gazing at his and our own future.

This miracle was the final one before Jesus’ own death; it was the miracle that the Pharisees would use against Jesus to justify the killing. And Jesus knew it. Didn’t he say to his disciples a few days ago: This sickness will not end in death but … through it, the Son of God will be glorified? He knew his turn was coming, that he would soon be “glorified’ on the Cross. This is our model and our pathway also!

How can we co-operate with God to experience God’s resurrection power in our lives and in our world; in the here and now? How do we react when we are given back our lives? There is no one in the story, not even Mary or Martha, who believed that Jesus would bring Lazarus back to life after four days in the tomb. No one expected him to do it; the emphasis in the story is on how we cooperate with a miracle-working God in each of our lives; on practical obedience and doing God’s will.

Each one of us is called to help create a culture of life and resurrection; to unbind each other from our fears and doubts about this last enemy, death. We must see that the world is bathed in the light and through our lived witness allow others to come to this same seeing. Death in the darkness of the tomb does not have the final word. Let us become witnesses to the call of Jesus; let us call others!

Imagine your own name being called and recognising Jesus, just as Mary recognised the beloved in that intimate speaking of her name; our name on the breath of the beloved who brings us life. This is love and resurrection intimately entwined.