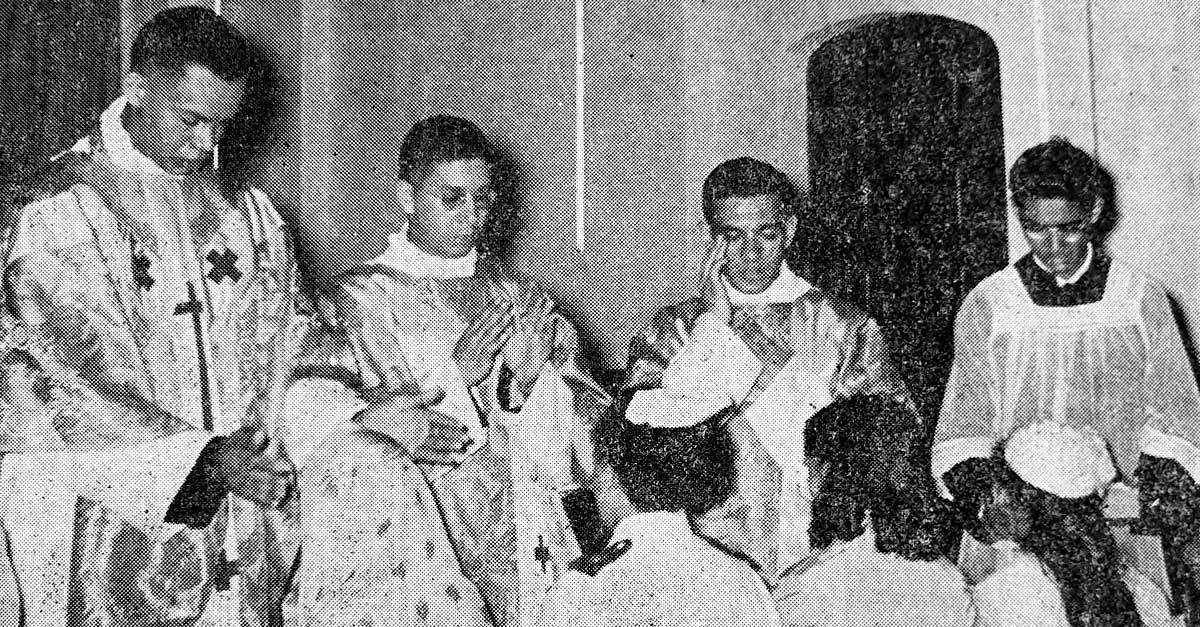 Fr Albert Danker (right) and his fellow Oblate ordinands Frs Charles Langlois and Cyril Carey give a blessing at St Anthony’s church in Greyville, Durban, shortly after their ordination in December 1955. All three priests are now dead.

Recently The Southern Cross published warm tributes to the late Fr Albert Danker OMI—the priest who built bridges over barriers and inspired others to do the same through conscientious service to society through the Young Christian Workers’ movement and its compelling mantra: See, Judge, Act.

Fr Danker was admired for the powerful outreach of his ministry—in pastoral work, as well as an explorer of faith and creator of new actions for justice.

I had known him from when I was an altar server at his first Mass at the old St Joseph’s in Stamford Hill Road, Durban, on December 11 1955, and then through his various assignments.

I knew him best as a priest who valued the laity and their friendship. Some friendships were enduring in life and death.

Roy Lailvaux was 16 and an altar server at St Michael’s church in Red Hill, Durban, when the recently ordained Fr Danker arrived at the parish, having completed training in Belgium as a Young Christian Workers chaplain.

He approached Roy and about ten young men to join a group he was forming to focus on youth. Little did they know that their first meeting was to be the beginning of a lifelong vocation.

Among them was the youngster who was to become Fr Allan Moss OMI and, like Fr Danker, a provincial superior of the Oblates of Mary Immaculate.

The first meeting was about work, about what goes on in a young man’s life, and preparation for the YCW methodology of See, Judge, Act and its impact on values.

“It was not just a talk shop,” Roy recalls. “We discussed real-life issues. Perhaps the most powerful input was to hear the facts and then ask yourself: What would Jesus do?”

The group experienced new insights through sessions on leadership formation and study weekends where youths of all races shared overnight bungalows contrary to apartheid legislation under Group Areas, says Roy. “This was where Fr Danker showed himself to be a great listener.”

A few years later Roy introduced Fr Danker to his new girlfriend, Letitia, which led to his forming a YCW group for girls and new work for the movement.

Roy was just 20 and living in the Durban cathedral parish when he and Letitia decided to marry. They wanted Fr Danker to officiate in their nuptial ceremony in Emmanuel cathedral.

To their chagrin they discovered that Fr Danker could not marry them as his licence as a marriage officer restricted him to only other persons of colour—despite  his having influenced Roy and Trish during their courtship and having mentored her in becoming a Catholic.

With their friendship deepening, Fr Danker persuaded the Lailvaux to run the first YCW house in Durban’s Overport area where they also joined a support group for married couples.

“Fr Danker baptised our children as our family grew and developed under his guidance. He was always full of ideas, such as using Trish’s skill on the piano to put the Ten Commandments to music in a special song,” Roy says.

“He was there for us and walked with us when our teenage daughter Sharon was killed in a car crash, even though we were now living in Johannesburg.”

It was Fr Danker who encouraged Roy, now retired, to look beyond his lack of formal training to join a large IT company where he rose to become HR manager.

Fr Danker deepened his great devotion to Our Lady by leading pilgrimages to sites dedicated to her which Roy and Trish joined when they could. They journeyed together to Lourdes, to Medjugorje and to Guadeloupe. They accompanied Fr Danker to conferences in different parts of the world. They took him to Russia as their guest.

This is how Roy recalls the more personal qualities of Fr Danker during their 65-year friendship:

“Every one of our children and grandchildren know and love Fr Danker. He loved his dogs.”

One of them was a little aggressive. When asked if the dog had bitten anyone, Fr Danker replied with a smile: “No. He has only bitten two priests and a nun.”

Fr Danker guided many young men into the priesthood. He also guided several young couples into successful marriages, always prompting them to ask: “What would Jesus do?”

Fr Albert Danker’s life has ended, but his influence continues as a spiritual voice for our times—torchbearer for family and society.