Fr Pat Naughton SDB: Tribute to a Builder of Faith and Skills

This article by SYDNEY DUVAL appeared in our January 2022 issue. We are re-publishing it here to mark the passing of Salesian Father Pat Naughton on March 23, 2022. 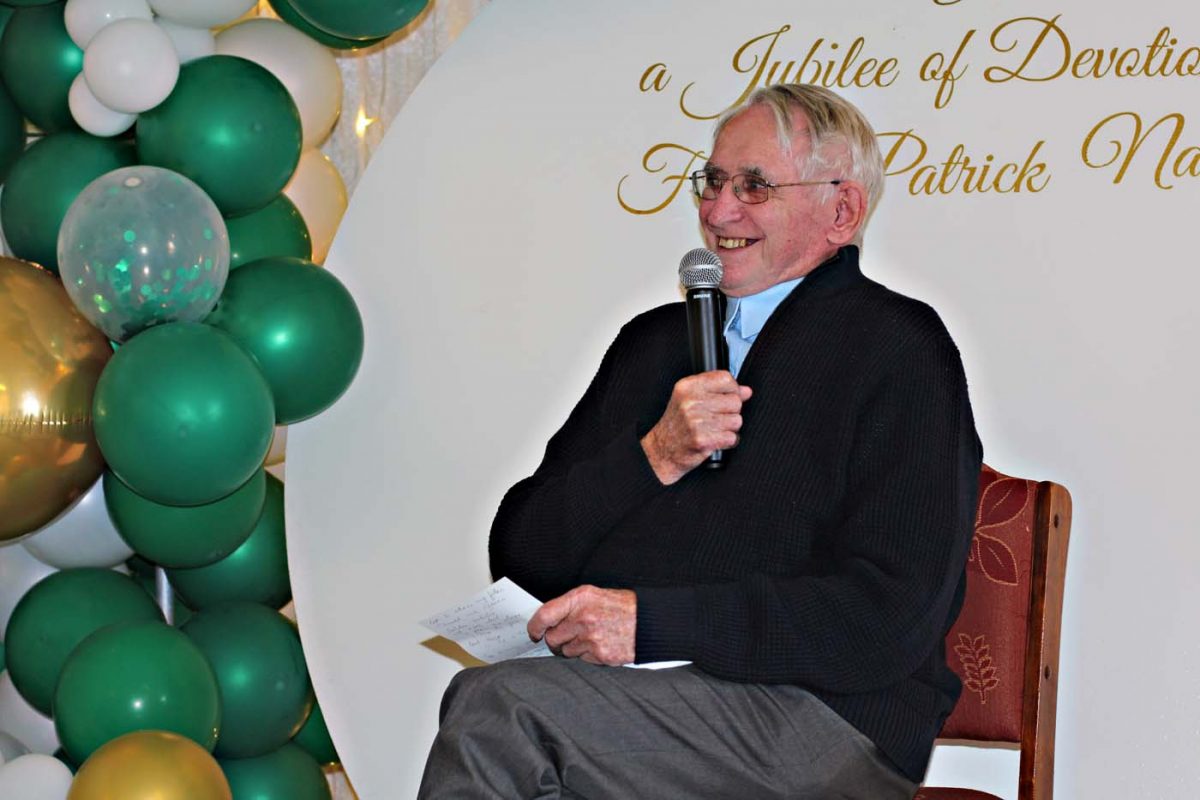 Fe Pat Naughton SDB at the celebration for his golden jubilee of priesthood in June 2021. (Photo: Sydney Duval)

The fountainhead formed by St Francis de Sales flowed from Savoy into Turin in 1841 to be embraced by Don John Bosco, who devoted his ministry to creating practical and holistic support for young people affected by the Industrial Revolution — abandoned, lost, ill-educated and unskilled.

Don Bosco himself became a new fountainhead that flowed onward into night schools and trade schools, adding a new dimension to religious life and ministry that spread as a river of life from country to country — a source of hope and renewal for the young people on street corners crying out to the world for help: teach me to write and read; show me how to make things or how to use a sewing machine; show me how to repair what’s broken; show me how to be a printer or carpenter; show me how to use a computer to connect to the new world forming around me; give me a football that I may learn to pass and dribble; show me how to serve other young people vulnerable to drugs and crime; make me a servant of those afflicted by TB and HIV/Aids. From street corners across the world there rose a common cry: Show us how to rise above adversity to celebrate life through training, service, work and compassion.

The river of Salesian ministry flowed into Cape Town in 1896, first to Buitengracht Street, then in 1910 to the Salesian Institute in Somerset Road, a cherished landmark and lighthouse of compassionate ministry that pulses to this day with an empowering and inspiring message of hope for those who are lost and, through Salesian skills training, find themselves.

Steering a barge on that river has been Fr Padraig “Pat” Naughton, who in 2021 celebrated his golden jubilee of priesthood. Salesian vice-provincial Fr Alberto Villalba SDB noted that in these 50 years of priesthood, Fr Pat had brought “the presence of God into the midst of the people [he[ met along the way: the mercy of God through Reconciliation, Jesus himself through the Eucharist, healing through Anointing of the Sick, the covenant of God among us through the sacrament of Marriage…”

Fr Pat began his priestly life on his own terms. His sister-in-law, Maureen Naughton, recalled her wedding in Rome to Padraig’s brother Joe. It was then that they first heard that Padraig wanted to be ordained at home in Galway, Ireland — and in his native Gaelic tongue. This had never been done before, but it was very much in keeping with the Gaelic cultural traditions the family had honoured all their lives. 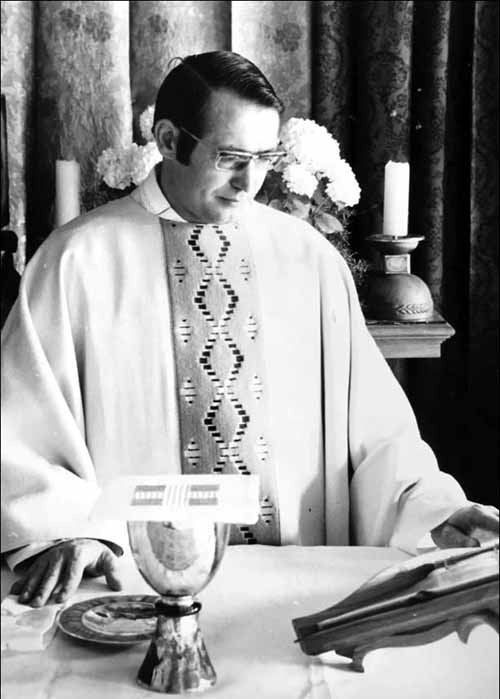 Preparations included Maureen’s brother translating the Rite of Ordination into Gaelic, which required the approval of the dean of Maynooth College at that time. The dean was a Gaelic scholar and delighted with this creative innovation. One neighbour recalled how as a young lad he collected peat-turf for lighting bonfires which lined the roads with flags to the local church and the hotel where the festivities would take place — all in honour of the first-ever ordination in Gaelic.

Maureen said: “It was a grand occasion with celebrations lasting all summer — a testament to the person who Padraig is. Through the years, Padraig has used the Gaelic traditions of spirituality and community, whatever the occasion or activity, whether it was fishing for mackerel and sharing the abundant catch with all, or working hard alongside us when he was home.

“Padraig celebrated countless Gaelic Masses around the kitchen table to ensure that these traditions were embedded in all our kids, whether through lighting the candles or ringing the bell at Mass. He has brought so much joy to us — especially to his brother Joe.”

Priestly formation and practical training had taken the seminarian Padraig to St John Bosco College at Walkerville, south of Johannesburg, where he was already showing signs of his warmth, mentorship and an irrepressible sense of humour, always strongly but fairly challenging the students to grow and better themselves, Patrick Boucher recalled.

Later, after returning to South Africa as a priest, Fr Pat served as rector of the Bosco community and school, then as provincial of the Salesian Southern African Province — much to his dismay. An introvert by nature, he did not relish the public profile. But here he honed his skills in leadership and participation. This was also at the height of apartheid when Fr Pat gave extraordinary witness to the Gospel, by exposing apartheid for the lie it was. One daring way was to give critical interviews on Radio NaGaeltacht (in Irish, of course), and telling the apartheid government to “téigh go hilfreann!” (“Go to hell!”).

No matter where he found himself, Fr Pat was the same — deeply reflective and spiritual in his priesthood and humanity. “His priesthood has impacted profoundly on thousands of people —students, parishioners, colleagues and friends. The man is simply amazing,” Patrick Boucher said.

Fr Jeff Johnson SDB, former rector of the Salesian Institute, recalled working with Fr Pat in the mid-1990s. He was a newly-ordained priest and Fr Pat was the second provincial of the newly-formed Southern Africa Vice-Province comprising South Africa, Lesotho and Swaziland. Fr Johnson recalled Fr Pat’s pioneering work in shaping the new vice-province: “He was all about paradigm shifts. Nobody knew what he was talking about, but that did not stop him from forging ahead with his vision of our Salesian mission to youth.”

Fr Jeff described his six years as the institute’s rector, starting in 2013, as the most challenging and fulfilling of his Salesian life. He felt privileged to join Fr Pat as the driving force behind the Salesian Institute Youth Projects in response to the needs of Cape Town’s poor and disadvantaged youth. He has images of Fr Pat working late at night, early in the morning and long daytime hours, planning and scheming, improving projects or developing new ones, in meeting after meeting, consulting, appealing and cajoling, seeking options, shifting paradigms.

Old friend Dermot Mullins from Scotland first met Fr Pat 40 years ago at the Salesian Institute. He was immediately struck by Fr Pat’s aura and spirit which exuded warmth, humility and love to all. People naturally sought his company and were only too willing to support Fr Pat’s work. “I often found myself asking myself, how did I get roped into that?”

Salesian Father Jonathan Daniels has known Fr Pat for 31 years. “I don’t think I’ve ever heard him raise his voice in anger. He is quiet and soft-spoken yet firm; gentle and kind; stubborn and pig-headed; he has a great passion for the upliftment of young people. He works best behind the scenes — and, yes, he’s stubborn.”

Stubbornness seems to be a quality that goes hand in hand with all great men and women. “The prophets of old were stubborn: Moses told God that he was going nowhere, for he had a speech impediment. Jeremiah said, ‘Leave me alone, I’m too young.’ Elijah said: ‘I’ve had enough,’” Fr Jonathan noted.

“It would seem that Fr Pat is in good company. He is stubborn because he is passionate. He is passionate for the work of Jesus as set out for us by Don Bosco. In 50 years of priesthood, Fr Pat has raised many a person from spiritual death and restored them to life again,” Fr Jonathan said.