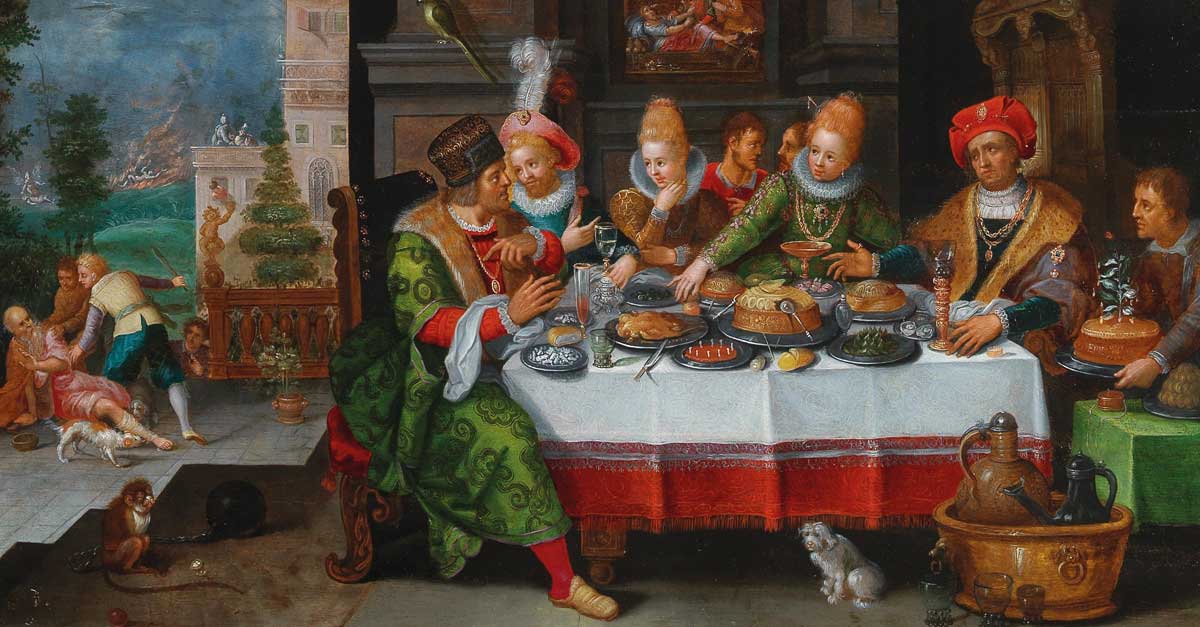 Lazarus and the rich man painted by Frans Francken

Our mission surely is to put Jesus into the economy. Mission is not just braving jungles and deserts; it is also braving the complex world of economics, challenging where necessary the unjust power structures in the world of commerce, searching for answers, having compassion, and overcoming the scandal of poverty.

Pope Francis has talked frequently about a social economy, one which provides a dignified living for all people, and lifts those who are on the margins of society.

His encyclical Laudato Si’ bluntly refers to the world economy as an economy that kills people and ecological systems.

I last referred to tobacco companies which market death (8 million deaths a year), and I now refer to a 2018 article by a university research office which states that Africa has become a prime target for tobacco companies, because of rising income, population growth, and—wait for it—”improved life expectancy”. Surely these products will lower life expectancy!

The increase in the volume of cigarette consumption in Africa between 1990 and 2012 was 44%.

The claim that a capitalist system outdoes the socialist system is not helpful. We may be better off on the whole, but the lives of so many people with no food security, inadequate housing, inferior education, no provision for retirement, sporadic employment, entrenched in cycles of poverty, cries out for justice.

We are not envious of those with the best of everything. The contrast in realities of the jetset and the mass of poverty-stricken communities, however, is indicative of a world which can provide for all but is radically constrained by self-seeking practices that hardly help the poor.

Economist Adam Smith’s invisible hand is not working as it should. The 18th-century Scottish economist, often called “the Father of Capitalism”, argued that when people are free to pursue their economic interests, the overall effect is a gain in economic advantage for all members of that society.

As for expectations of adverse ecological consequences for the world from profit-dominated business, they are here—the damage has been done.

There are programmes cropping up globally to repair or mitigate damage. The UK plans to end the production of petrol, diesel and hybrid motor vehicles by 2035. A noble gesture.

There are many other signs of a new awakening, a new awareness. Even people who travel to work by car who organise lift clubs not only save money but reduce pollution. We need more champions, big and small—and prayer.

Jesus’ assertion that the poor will always be with us (Mt 26:11) is not an excuse for capitulation, but rather is a damning indictment of humanity.

As long as someone is poor, the social sin of poverty is in evidence; there is an injustice.

Structures of sin derive from personal sins, and there is guilt where we fail to curtail injustice, effectively cooperating in social sin.

We may be accomplices in situations and institutions that are contrary to divine goodness (Catholic Catechism 1868/9).

Let us multiply the number of small and big initiatives.

We must not forget the spiritual powers that derive from prayer and the sacraments. The Eucharist transforms the bread into the Body of the Risen Lord. May it also transform the processes which produce that bread.