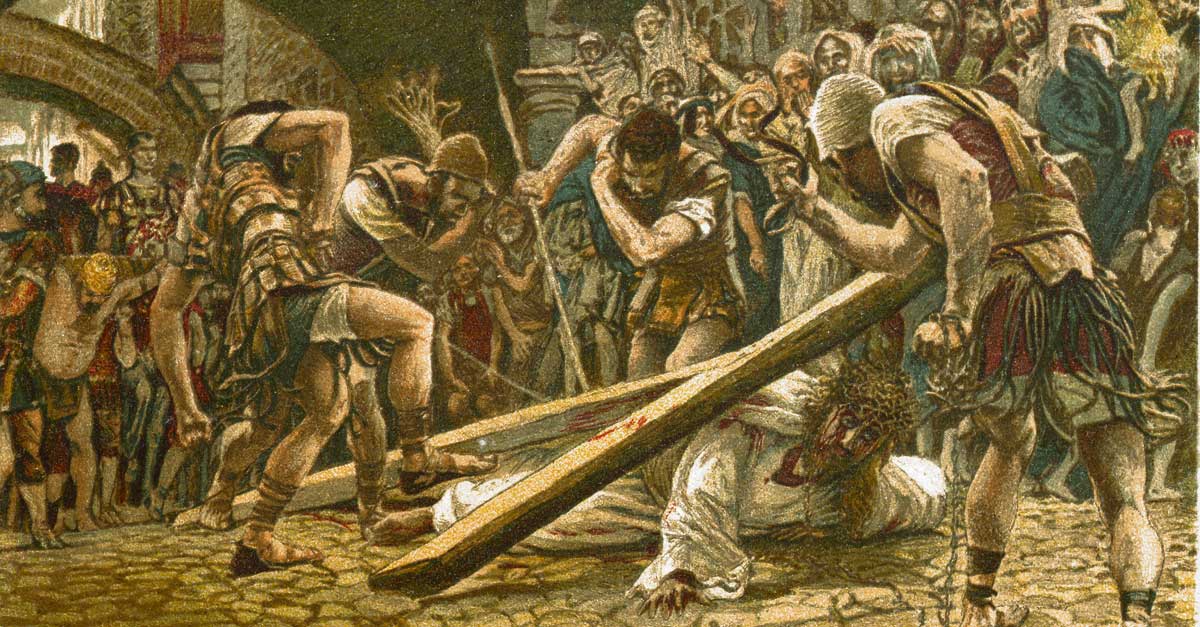 Jesus falls under the Cross painted by James Tissot

Lent is a time when we seek to deepen our relationship with Jesus who died on the Cross to redeem us.

It is an uncomfortable exercise. We live in a world that rejects suffering, choosing rather to glorify pleasure and promote a picture-postcard existence.

Of course, we all want to avoid suffering, but our generation has gone a step further. For us suffering has no purpose. We hide it or we look for ways to escape it.

We hide mental suffering behind the mask of fake happiness. We contemplate euthanasia as a valid end-of-life option. We choose to ignore the suffering of those who live at the edges of our society.

For this reason, contemplating the Crucified Christ is probably harder than we might believe. It is easy to picture Jesus in the romanticised scenes of the nativity, but it is far harder to see his disfigurement on the way to Calvary.

I recently read a talk by Fr Joseph Kentenich, the founder of the Schoenstatt Movement. He explained that St Paul had a similar problem.

Paul persecuted the Christians, but not because he was a bad guy. He was a devout Jew and everything he had heard about this man Jesus and claims that he was the Messiah sounded like pure heresy to him. And that kind of heresy enraged him.

The text says that “Paul’s soul was profoundly enflamed” because “someone who hangs on a tree cannot really be a redeemer”.

Paul’s conviction of the belief structure in which he was raised blinded him to a different truth, a new way of seeing Jesus.

And then the Damascus moment occurred. His physical blindness released him from his interior blindness. Deprived of his pride and of everything he had previously relied on, he was finally able to encounter this “crucified redeemer”.

A newly found humility, in which he recognised his earlier misconceptions, enabled Paul to join the community of believers (and I can only imagine that he must have had a hard time convincing them of his change of heart).

We Think We Know

I  wonder if we, as Catholics with a wonderful 2000-year history, don’t sometimes suffer from the kind of pride that Paul had prior to his conversion.

We have fixed ideas of who Jesus is. We know (or think we know) what the Church teaches on a range of moral, theological, and social issues. We try to apply time-tested strategies for ministry and the formation of the faithful.

And we do all this because we are devout Catholics and want to preserve the teachings of the Church because we know how important those teachings were for us.

I sometimes wonder, though, whether in doing this, we lose sight of the People of God.

Many of them are not well-versed in the teachings of the Church. Many have experienced great suffering in their Christian journey, and the application of the law brings more hurt than healing. Others may be so steeped in the values of the world that the teachings of the Church seem quite bizarre and need to be digested slowly, one piece at a time.

But we might miss all these nuances when we stand on the side of arrogance and pride. Like Paul, we want to “eradicate” anything that might seem like a diluting of the faith, or even worse, the creeping in of new heresies.

Christ Crucified is Greater than the Structures of the Church

The message of Christ suffering on the Cross is one of compassion. It is the suffering Christ, robbed of all his human dignity, who grants paradise to the criminal on the cross next to him. It is the bleeding, beaten Christ who cries to heaven, pleading for the forgiveness of all humanity.

We can see this Christ only if we also seek a change of perspective.

How might the way we teach Gospel values and pass on the teachings of the Church change if we, for example, place ourselves in the position of a woman who feels that she has no option but to abort her baby?

What changes if we imagine ourselves as the teenage boy who contemplates suicide because he can see no way out of present anguish or confusion? Or a gay couple who love each other and also love God? Or a community in the Amazon or the Congo Basin who have irregular access to the sacraments because no one is available to minister to them?

What misconceptions might we have about youth culture that sees nothing wrong with the “hook-up” culture? Can we see what they are hungry for and how can we speak their language?

What misconceptions might we have about our priests and the struggles they face in their ministry and honouring their vows? What of the woman who feels called to share in the sacramental ministry of the Church? Or couples who are afraid of opening up to the possibility of new life by making a commitment to marriage or children?

Instead of asking “what does the Church teach?” on all these hot-button issues, could we not perhaps ask: “How does Jesus call me to suffer with those who try love Christ, but for whom the Church’s teaching seems as a burden too hard to bear?”

What if each day that remains this Lent we put ourselves in the shoes of those who suffer?

How will it have changed us when we contemplated the Crucified Christ in our crucified brothers and sisters who often suffer so much condemnation at the hands of the Church?