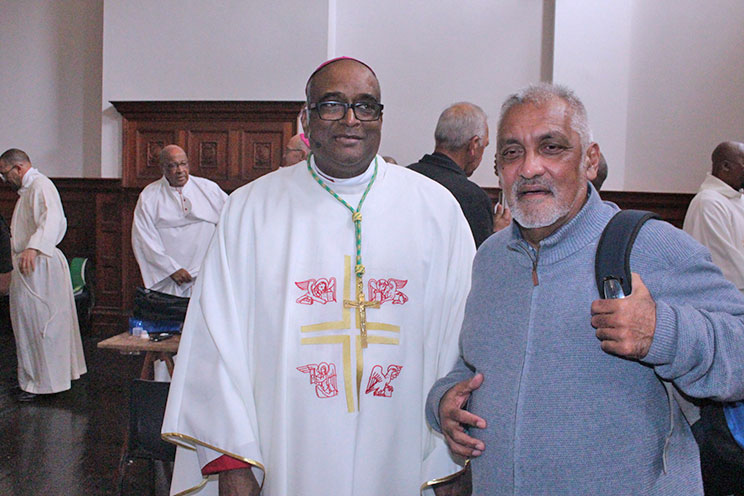 This year marks the 30th anniversary of St Joseph’s Theological Institute (SJTI) in Cedara, near Pietermaritzburg.

The institution grew out of the Oblate Scholasticate, which for its 46 years until 1989 had accepted only Oblate students.

Since 1989, SJTI has served seminarians from most religious congregations and lay students.

The anniversary year also sees the installation as grand chancellor of its former president Bishop Sylvester David OMI, now auxiliary in Cape Town. He succeeds Archbishop Buti Tlhagale OMI of Johannesburg, who had served as grand chancellor for the past five years.

“The 30th anniversary of the institute is significant because it comes at a time when it had reached a stage of consolidation of its accredited programmes, as it seeks to attract more lay or private students,” according to Fr Neil Frank OMI, chair of the board of members.

“The future of Catholic higher education in South Africa requires reputable higher education institutes that can provide the faith-based grounding not just for religious or clerical students, but for all who want to serve Church and society,” said Fr Frank.

He also voiced his appreciation for Archbishop Tlhagale’s “faithful service to the institute since 2015”.

“The archbishop is a patron of Catholic higher education, and his own life and ministry has underscored the importance of having intellectually competent leaders in the Church,” Fr Frank said.

Bishop David had been the president of St Joseph’s for eight years, from 2007-15.

“He understands the demands of higher-education management in South Africa and he worked tirelessly to upgrade the professionalism of the operations and products of the institute. His academic specialisation in and love for the sacred scriptures have added much value to our ministry both in the classroom and outside,” Fr Frank explained.

This year also saw the resignation of Fr Ewen Swart OMI, who became the fifth and youngest president of SJTI when he was installed in 2018. Fr Swartz had succeeded Fr Frank who had been in office since 2016. Fr Frank’s term was cut short when he was elected to be provincial of the Oblates of Mary Immaculate.

“It was with reluctance that we accepted the resignation of Fr Swartz as president. We know that much thought and discernment had gone into his decision, and we accepted that it was right for him and his overall wellbeing. We are grateful for his leadership in the past two years,” Fr Frank said.

The acting president is Oblate Father Joseph Phiri, who has had served the institution as its superior.

Apart from offering bachelor degrees in philosophy and theology, which are necessary for the Catholic priesthood, the institute now offers a degree in development studies as well as a postgraduate diploma in theology, which is open to anyone with a bachelors degree in any field of study.

“The staff are highly trained in their fields and our students, upon graduation, have excelled in furthering their studies at other institutes. The trajectory of growth of the institute is pointing in the right direction,” Fr Frank said.

“I am proud to have been a student at the institute, to have been its president for a few years and to continue to serve its enduring vision as chair of the board of members,” the priest said.

The 30th anniversary celebration, together with the institute’s 15th graduation ceremony, will take place on March 27 at SJTI Cedara, beginning with a Mass at 9:00.

The graduation ceremony will start at 11:00 followed by an anniversary celebration lunch at 13:00.