Churches In Europe Reopening With Restrictions To Avoid Contagion 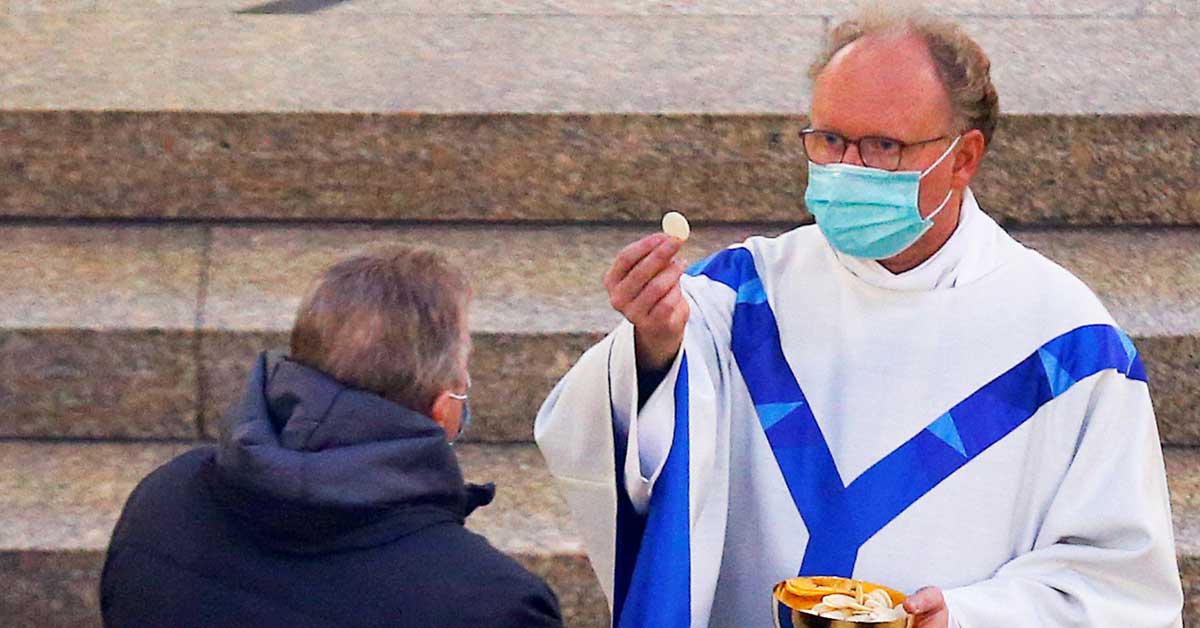 A priest wearing a protective face mask gives holy Communion to a man May 1, 2020, in a Catholic church in Kevelaer, Germany, during the first public Mass in the city since churches were closed because of the coronavirus pandemic. (CNS photo/Thilo Schmuelgen, Reuters

By Carol Glatz – With a number of countries in Europe slowly easing restrictions as part of a long-term strategy for containing the spread of the coronavirus, churches, too, are seeing changes in what is or will be allowed.

Where possible, for example, in Italy, protocols were the result of government officials, public health experts and church leaders working together to find ways religious practices and public worship could be resumed without posing risks to individuals and public health.

Where Masses are resuming, most include some common rules such as: limits on the size of the congregation; use of hand sanitizer by everyone before entering the church and by those distributing Communion immediately before doing so; no holy water in fonts; no exchange of a sign of peace; and Communion only in the hand.

Here is a roundup of what some European countries had decided as of May 7:

– The French government announced April 28 that it would begin a gradual easing of restrictions starting May 11 after its six-week lockdown. But churches will not be able to resume public liturgies until at least June 2.

Church leaders had hoped for a lifting of measures by May 31 for Pentecost.

According to government directives, places of worship can stay open as they are now and funerals can be celebrated in churches and cemeteries, but with no more than 20 people present.

The French bishops’ conference has encouraged the faithful to “go to church to pray alone” and urged dioceses and parishes to attend to their people’s faith life.

– In Switzerland, the Catholic bishops’ conference issued guidelines April 27 on the norms to be followed when church services were set to open to the public starting June 8.

Funerals, which have been allowed with restrictions allowing for social distancing, can continue with the fewest number of people possible according to the location, preferably outdoors, and with a simple ceremony. Large families may gather only in spacious areas. Those who have died because of COVID-19 must be buried in a manner that follows state guidelines.

Based on each building’s normal occupant capacity, only one-third of that number will be allowed inside so people can maintain a personal space of minimum four-square meters (43 square feet).

Family members living together may sit together, but throughout, people can sit only in every other pew.

The faithful must leave in a precise order, maintaining social distance and avoiding any crowding, especially outside.

After Mass, all objects and everything people came in contact with must be disinfected, and churches can remain open for the public for visits and prayer. Baptisms, first Communion and marriages can be performed, following current public health norms regarding social distancing and hygiene.

Catholics are encouraged to pray at home and those who are ill or “at risk” should not attend Mass but can still request to receive Communion from those who have been properly formed and commissioned.

– In Germany, dioceses were able to decide on the date to open churches for public worship after a six-week lockdown. The earliest date was April 20 with other dioceses staggering their start dates until May 10. Only a handful of dioceses were still left as of May 5 without an announced start date.

Each diocese established guidelines with direction from the bishops’ conference.

Common protocols included the need for individuals to wear a facemask, sit in designated seats and maintain a distance of five feet from others. There are limits to how many people may be allowed inside and many parishes ask that reservations be made online or by phone.

Floors are marked for where to stand when waiting to receive Communion.

Some churches have plexiglass to separate the celebrant from the communicant during the distribution of Communion, others distribute Communion wearing gloves and a face mask.

– In the United Kingdom, Prime Minister Boris Johnson was expected to outline May 10 the government’s plan for partially lifting its lockdown measures as it heads toward “phase two” of trying to contain the spread of the coronavirus.

While “there is no substitute for Catholics being able to physically attend and participate in the celebration of the Mass and the other sacraments,” said a statement written on behalf of the Catholic Bishops of England and Wales May 1, “it is right that the Catholic community fulfils its role in contributing to the preservation of life and the common good of society.”

“As the government’s restrictions are relaxed step by step, we look forward to opening our churches and resuming our liturgical, spiritual, catechetical and pastoral life step by step. This will also be of service to those beyond the Catholic Church who depend on our charitable activity and outreach through which much goodness is shared by so many volunteers from our communities,” it added.

– In Ireland, the Catholic Church together with leaders of the nation’s main Christian communities, released a joint statement May 4 after discussing the future reopening of churches and places of worship, saying they look forward to the reopening of churches. However, “we accept that at this time it would not be appropriate to consider a full return to such gatherings, apart from the limited number of people who are able to meet for funeral services.”

The churches did urge the government to consider letting church buildings be open for individual visits and private prayer with social distancing given that many medical and scientific experts suggested such a step would be possible.

– In Italy, churches had always been “open,” but the public will be allowed to be present for liturgical celebrations starting May 18.

Among the norms that must be respected: members of the public must wear a facial mask inside the church; avoid any form of assembly throughout the structure; and maintain a five-foot distance from each other. Individuals must not participate if they have a fever or flu-like symptoms or have been in contact with someone who has recently tested positive for the coronavirus.

The parish should provide, if possible, special entrances and sections inside for differently-abled people; doors should be left open before and after Mass so people don’t have to touch handles; and additional services should be provided during the day if there is not enough room for people wishing to attend a Mass.

While there can be an organist, there should be no choir during this phase of reopening.

The church and objects inside have to be sanitised after each celebration and rooms be aired out where possible.

The sacrament of penance should be administered in an open, ventilated location and both priest and penitent must wear masks and keep a five-foot distance while ensuring a sense of privacy.

The norms apply to all liturgical celebrations including marriages, funeral Masses, baptisms and the anointing of the sick. The last two require the minister to wear a mask and disposable gloves.

For now, the celebration of the sacrament of confirmation is to be postponed.

Outdoor Masses should be considered and the livestreaming of Masses for those who cannot participate are encouraged.

As Lockdowns End, Pope Prays For Prudence In Behaviour
Share