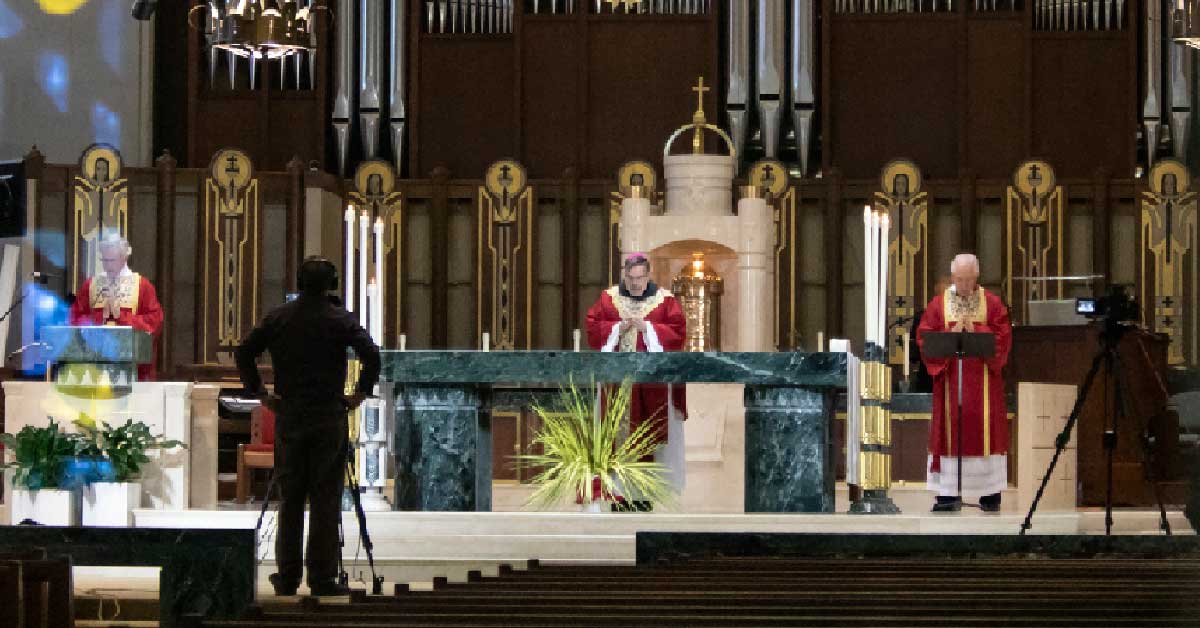 By Peter Finney Jr – During two months of social isolation, the work of American business has migrated, ready or not, into the home.

If pajamas have become the new workplace attire and the sofa has been transformed into the new desktop, where does that leave a U.S. Catholic Church yearning to stay connected with its parishioners through Zoom liturgies and Facebook Live spiritual pep talks pumped into living rooms by social media?

For Scot Landry, the Boston-based Catholic evangelist whose vocation as co-leader of Dynamic Catholic requires him to think in broad strokes, the church has a unique opportunity to step up to the challenges created by the coronavirus pandemic.

“I think the Catholic Church and every parish is going to be different because of the virus and how we’ve responded,” said Landry, qualifying his answer because of the unknowns about how long it will take to find a vaccine or a therapeutic medicine to combat the virus. But, “the parishes that have invested in technology and robust communication with their parishioners have done much better throughout the last eight weeks.”

One of the major advances, Landry said, will be in the number of parishes who move forward with plans to offer online giving so that people can more easily “support the mission.”

“Some of the parishes who have immensely struggled over the last eight weeks are the ones that relied almost exclusively on the weekly Sunday offertory,” Landry told the Clarion Herald, New Orleans’ archdiocesan newspaper. “Liturgically, it’s a very important part of our Mass to bring up the gifts, but it’s far from ‘best’ if our parishes are going to have consistent support from their parishioners.”

The massive changes in remote learning in schools also have ushered in a technological movement, Landry said.

It’s going to accelerate the idea of the ‘flipped classroom,’ where a lot of instruction happens on video. Then, when people gather with the teacher, it’s more to ask questions,” Landry said. “The flipped classroom could be a great model for handing on our Catholic faith to people because many parishes have been challenged with (having enough) catechists.”

Landry works with 61 parishes across 12 U.S. dioceses. One of the biggest questions he has had to grapple with is how fearful Catholics will be to return to Mass.

“Somewhere in the neighbourhood of 50% of our regular Mass attendees on Sunday will be cautious in returning or scared to come back,” Landry said, including seniors and families with younger children.

With most dioceses across the U.S. “dispensing” Catholics from their obligation to attend Sunday Mass, Landry said parishioners may begin choosing to attend weekday Masses, when the churches will be less crowded.

The most important thing a diocese – or a parish – can do right now for parishioners is to “over-communicate,” Landry said.

“It’s to speak from the heart about the care for everybody individually and the care for the community when it regathers and that we want to be safe,” Landry said. “Then each parish needs to figure out how it can distribute Communion to the homebound or those who choose to stay home during this time in much larger numbers than most parishes have ever been asked to do. That would allow people to still participate in Mass and satisfy that hunger for the Eucharist.”

Communication is key, Landry said, because not all age or demographic groups are reached through the same methods of communication.

“Think in terms of the multiple platforms – who is the best target audience for that platform and how the message could be shaped slightly differently to reach the people that read that platform?” he said.

Printed bulletins and Catholic newspapers remain important platforms, Landry said, “because for some of the most generous people in the church today in terms of their giving, that’s how they access information about the church and the diocese.”

Landry is working with 10 parishes across the Archdiocese of New Orleans on a pilot program to raise the level of evangelization within their respective communities.

He heaped praise on Mary Queen of Peace Parish in Mandeville, Louisiana, for the way in which it has become a “dynamic” online parish through Masses, devotions and email communication.

He also said St. Luke the Evangelist in Slidell, Louisiana, has done wonderful online Masses, and St. Pius X in New Orleans came up with an idea to pair up two parishioners who are living alone to serve as telephone buddies to each other.

Several parishes have reached out to parishioners by telephone to let them know they are thinking about them and asking if they have specific needs or prayer requests.

“Parishes across the country love the idea of calling their parishioners,” Landry said. “We mentioned the idea, and probably half of our parishes started calling the next day. One parish in California called 5,000 families in one week.”

The biggest takeaway from the virus quarantine, Landry said, is the recognition of “how fragile life is.”

“Sometimes people, particularly young people, consider themselves invincible and that they might be the first people besides Jesus to not die,” Landry said. “Life is fragile. Loneliness is high.”

“This is an awesome opportunity for the Catholic Church to stand ahead and provide the spiritual and corporal works of mercy. We’ve always been the largest caring organisation on the planet,” he added. “It would be awesome if because of the outreach of parishes today, that people saw us as the leader in caring and as the leader in prayer.”