Pope: Christianity Is A Relationship, Not A Set Of Rules 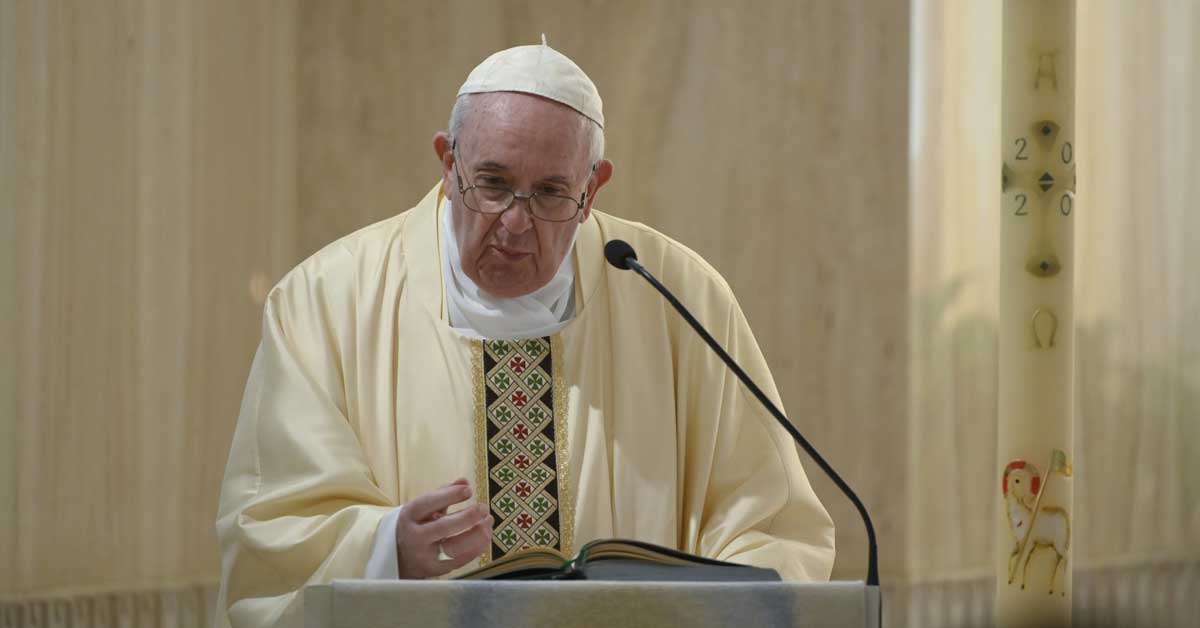 Pope Francis celebrates morning Mass in the chapel of his residence, the Domus Sanctae Marthae, at the Vatican May 15, 2020. (CNS photo/Vatican Media)

By Cindy Wooden – Christians must follow the Ten Commandments, of course, but Christianity is not about following rules, it is about having a relationship with Jesus, Pope Francis said.

At the beginning of his morning Mass in the chapel of the Domus Sanctae Marthae, Pope Francis noted the day’s U.N. celebration of the International Day of Families and asked people to join him praying “for all families so that the Spirit of the Lord – the spirit of love, respect and freedom – might grow in families.”

In his homily, the pope focused on the day’s first reading and its account of the first Christian converts from paganism being “disturbed” by other Christians who insisted the converts must first become Jewish and follow all Jewish laws and customs.

“These Christians who came from the pagans believed in Jesus Christ, received baptism and were happy – they had received the Holy Spirit,” the pope said.

Those who insisted the converts observe Jewish law and customs had “pastoral arguments, theological arguments and even moral ones,” he said. “They were methodical and also rigid.”

“These people were ideological more than dogmatic,” the pope said. “They reduced the law, the dogma to an ideology: ‘You must do this, this and this.’ Theirs was a religion of prescriptions and, in that way, they took away the freedom of the Spirit,” who had brought the converts directly to Christ without first having them become Jewish.

The problem of individuals or groups trying to impose extra conditions on believers was present from the beginning of Christianity and continues in some quarters of the church today, he said.

“In our own time, we have seen some church organizations that seem to be well organized, to work well, but they are all rigid, each member the same as the others, and then we have discovered the corruption that was inside, including in the founders.”

Pope Francis ended his homily inviting people to pray for the gift of discernment as they try to distinguish between the requirements of the Gospel and “prescriptions that make no sense.”

Pope: Humility, Not Showing Off, is the Christian Way of Life
Share